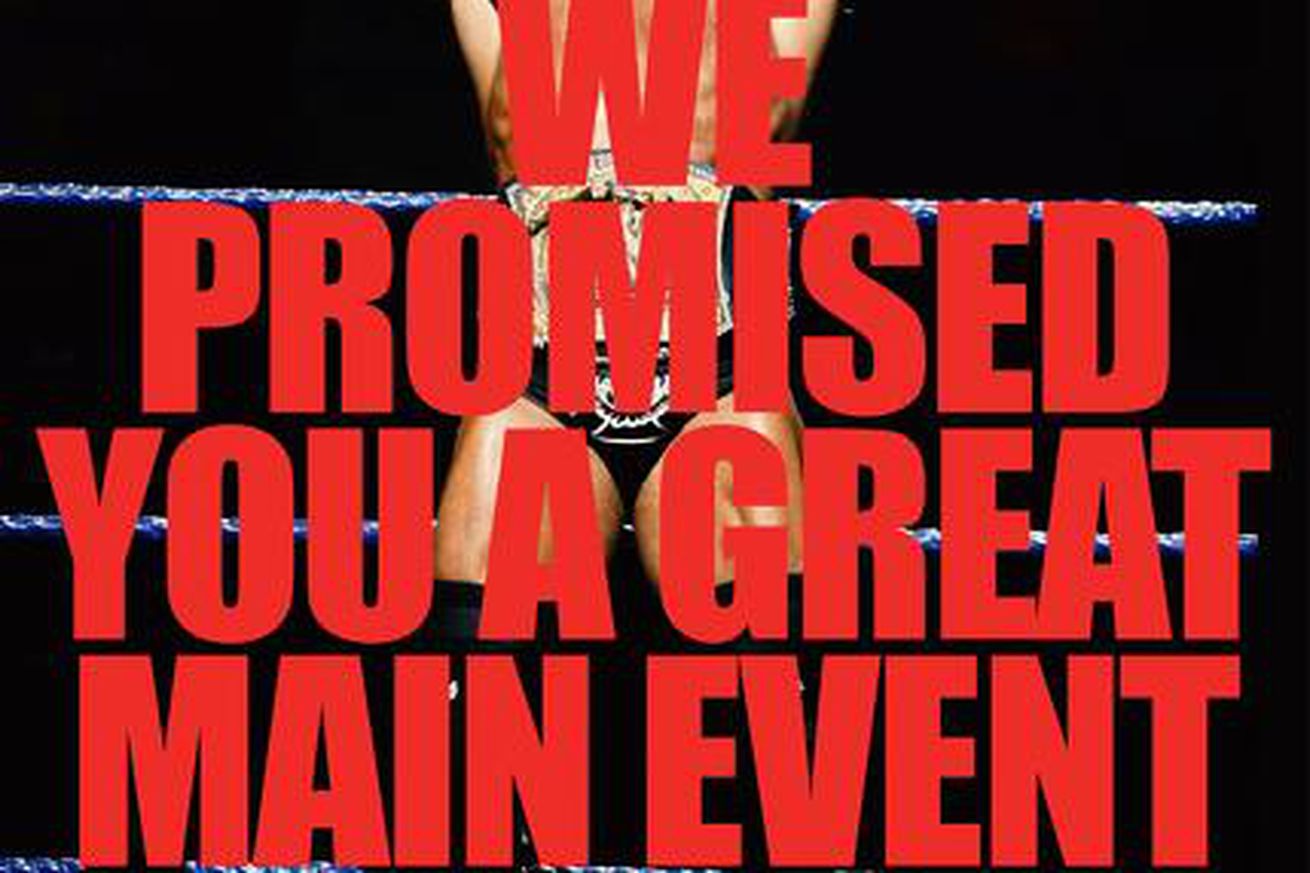 Our old colleague Bill Hanstock has a new book out. Because that’s what you do when you’ve already won an Emmy, written movies (including one with Danny Trejo AND RVD in it), and provided the world with Total Divas recaps so good even a reality show hater like myself made sure to read them every week.

That snark just masks my jealousy (seriously, I would kill to have something as cool as 3-Headed Shark Attack on my resume). But you can’t be mad at Bill – who’s as nice as he is talented.

Even if I’d never met the man, though, I’d be excited to read We Promised You a Great Main Event: An Unauthorized WWE History. Just from that title alone, you know Hanstock’s book is for us – wrestling fans who love not only this sometimes grand, sometime goofy art form, but also the business dealings and creative processes behind bringing it onto our screens and into arenas near us (or used to anyway).

We Promised You a Great Main Event promises “a deep dive into key moments of the company’s history, from the behind-the-scenes drama at the Montreal Screwjob, to the company’s handling of the Jimmy Snuka scandal, to the real story of the Monday Night Wars.” And if that doesn’t sound up your alley… we’re glad you’re here, but you might be on the wrong website.

Beyond just us “smarks” though, if you’ve read any of Bill’s work here at cSs or elsewhere around the wrestling web, you know he’s uniquely suited to deliver an entertaining look at the biggest, most complicated promotion our pastime’s ever had, in a way that’s both appreciative and critical of its legacy. This thing is for everybody who’s ever watched wrestling, or is at all interested in pop culture and its role in the overall culture.

But this isn’t just me telling you how excited I am about the book. I also had a chance to ask the author a few questions about We Promised You a Great Main Event, so without further ado… here’s Bill telling you why he’s so excited for you – and everyone you know – to read the book.

What inspired you to write the history of WWE?

I think that most wrestling fans — especially those of us who have been fans for most of our lives — have often found ourselves having to explain pro wrestling to people, or explain why we care about it. There’s also the fact that the majority of books about pro wrestling are either mega inside baseball that only appeal to the most hardcore of fans and a specific moment in time, or they speak down to fans — or they’re largely kayfabe — made me think that I could contribute something important here.

I wanted to make something comprehensive, informative, accessable, faithful, and above all entertaining and in my own voice. I’ve spent years trying to explain why I’m a fan to people, or why the business is so fascinating. I couldn’t pass up the opportunity to tell it all, start to finish, in my own way. It’s sort of a wrestling fan’s dream! Certainly a wrestling writer’s dream.

How is your unauthorized history different from other books about the company and wrestling in general?

Apart from what I mentioned about the tone of the books that are available, the last time there was an attempt at a mass-market, complete history of WWE was the great Sex, Lies and Headlocks, and that came out in 2004. To say that the entire wrestling industry has completely changed in the last 16 years is a massive understatement. Of course, the authorized WWE books only tell the company’s version of history, which might be a bit lacking from time to time.

There are a bunch of wrestling books that are fantastic, but they’re generally about specific people or defunct companies or moments in time. This is sort of the whole shebang, from the origins of pro wrestling all the way up through the modern indies, the international boom, AEW and the COVID-19 era. It’s as timely and objective and accurate as I could have possibly been, pointing out the warts and scandals and awful things with appropriate gravity while still being able to make jokes about Phantasio and Mantaur.

This book is truly for everyone. People who aren’t fans at all will find it fascinating as a cultural artifact and lifelong smart fans will get a combination of nostalgia, tons of little tidbits they may not have known before, and me as your fun friend sitting next to you on the couch or at the show tossing off zingers at the perfect time. At least, that’s what I hope they get out of it!

What’s your favorite fact or story you learned from researching the book?

There’s a lot of stuff that was really fun to learn, starting with the important fact that Vince McMahon and WWE are far from the first “winners” in wrestling history that got the chance to write their own histories. It’s been happening forever!

I also enjoyed being able to tell the entire history of women’s wrestling in WWE and how strange that entire division has been through all of its stops and starts until now, when it’s just starting to get it right.

And as I was actively writing the book, I had to sort of write through the entire Saudi Arabia partnership as well as the COVID-19 pandemic and how that affected the business. It was fascinating to realize I might be the first person to put these two important moments in wrestling history down in a book and gain immediate perspective on how historical context works and how we can’t perceive the entire scope of a moment or event until long after it has passed.

Sold, or at least intrigued? You know you are.

Find somewhere you can get your hands on a copy of We Promised You a Great Main Event: An Unauthorized WWE History at any of the links here.