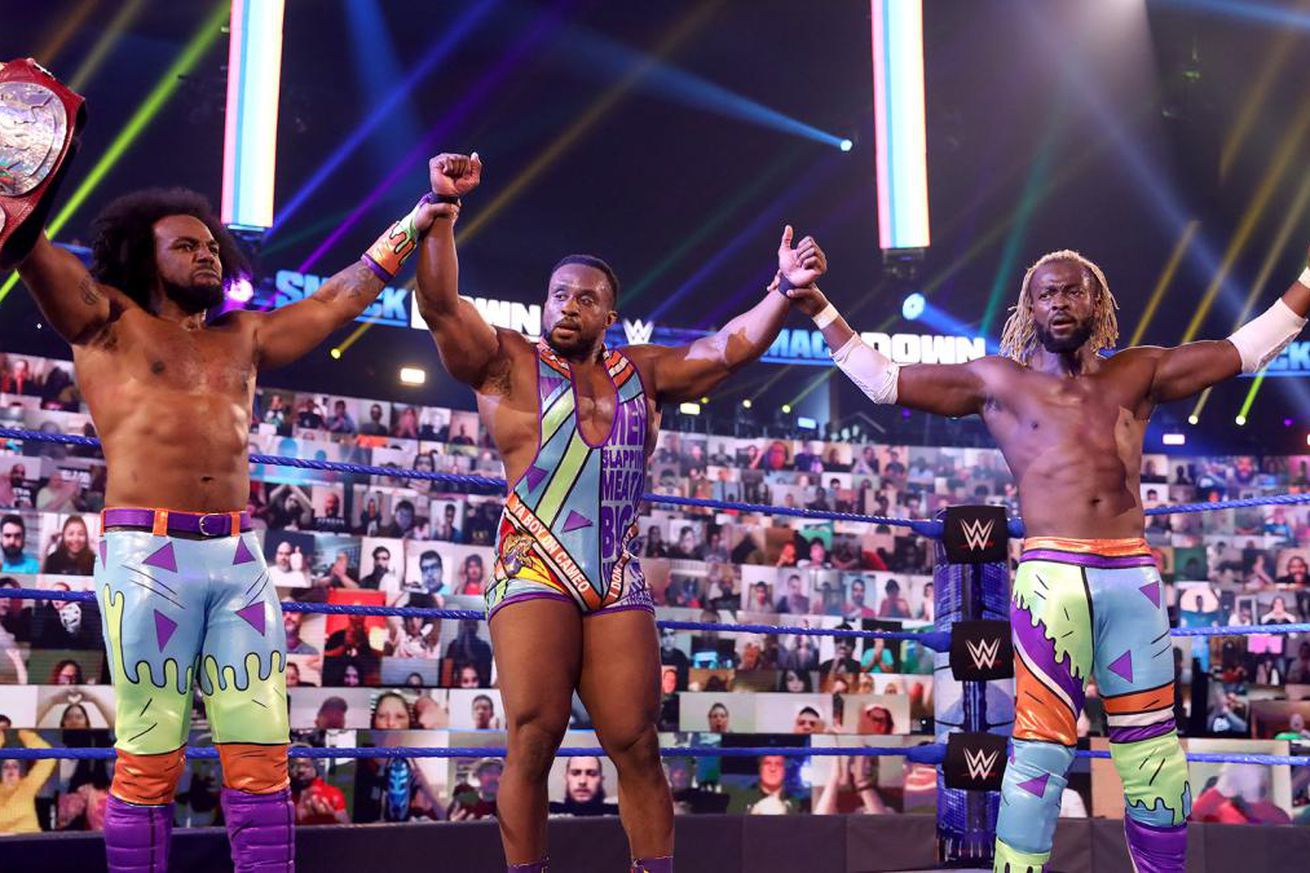 The New Day were in the ring for their final night as a trio.

Six years ago, the first chorus sang about the Power of Positivity. Then came the Booty-O’s, followed by pancakes. The New Day has been through it all. They’re the current longest reigning tag champions in WWE history, and it all started because Big E and Xavier Woods walked up to Kofi Kingston with an idea.

Kofi said that in 2012, he was ready to call it quits until that moment. Xavier even mentioned how if it wasn’t for Kofi and E, he probably wouldn’t even be in WWE anymore. That part cut right through me.

Any one of these guys, hell – all of them even, could have been in the round of COVID-19 cuts back in April, if not for the idea of The New Day.

On a personal note, my fandom of New Day went back and forth over the years. Around the time of the Old Day segment (yeah y’all remember that?) I wanted them to split, and I wanted it to be the way a lot of people originally thought it would – Big E heel turn.

I can now tell you I am 100% happy that it never happened. The New Day trio was pivotal in Kofi’s historic rise to WrestleMania 35’s WWE Championship win. These three men truly uplift and support each other, and it shows, man. This is the truest meaning of a brotherhood.

So after the tears were dried up, New Day had to team up one more time to take on Sheamus, Cesaro, and Nakamura. It was a phenomenal match. Xavier Woods, who was out for nearly a year due to an Achilles injury, lifted Big E from the ground onto his shoulders! Cesaro showed his incredible strength with a gut wrench superplex to Big E, too.

After their final win as a trio, the tears flowed again as they hugged.

I love you gentlemen.

Jey Uso is a rising star

The main event of tonight’s episode was a Universal championship match between Roman Reigns and Braun Strowman.

Reigns dominated the first few minutes, but Braun was able to keep kicking out at one.

Brilliantly, Reigns once again did a low blow kick out, but Braun was able to kick out of a spear, as Goldberg looked on in the ThunderDome. Reigns with a guillotine submission, which is not a usual move from him. But it got him a win via tap out!

After the match, Jey Uso came out and locked eyes with Reigns. Reigns asked Paul to give him a chair, and as Jey looked on from the floor, Reigns showed him what Hell in a Cell will look like and slammed it into Braun’s back with a bunch of referees and officials trying to stop him. Reigns said that even though Jey is making no sense when it’s his job to be the head of the table for the family. He also told Jey that he loved him. He kicked the chair to Jey and turned his back, but Jey dropped the chair.

Then he slapped Reigns in the face, superkicked him, and hit him with the chair twice in a fury. My lord that was incredible! I don’t think I’ve ever seen that vicious side of Jey Uso before.

But it all ended for him as Reigns recovered and hit him with a Superman punch and said that was his final chance to back down.

Chills. Absolutely wonderful and I could watch this feud go on for the rest of the year and not get tired of it. I had no problems with how Braun was treated here. I would like it to believe that him screaming “I’m not finished with you!” means that literally. Hopefully.

Contract signing – Bayley and Sasha came out to sign the contract for their Hell in a Cell match. Bayley said once again that she became the longest reigning SmackDown women’s champion all by herself. Sasha interjected and said to say it again, but Bayley came back at her and said that she knows she’s been waiting all this time to turn on her.

Sasha seemed to forget that she actually did turn on Bayley a few years ago. Sasha said that Bayley turned her back on her and her name is bigger than Bayley’s title. (Mandalorian, y’all!) Bayley left and didn’t sign the contract. I know the match between them will be great, but the revisionist history is not great. You’re never going to convince me that Sasha is a full on babyface here.

Daniel Bryan returns – Bryan returned after four months away. He started hyping up the fresh blood, until Rollins interrupted, hurt that he wasn’t mentioned. He asked whether Bryan would be with or against him. Bryan called him self-centered, and Rollins attacked.

Rollins ducked out and The Mysterios chased him back into the ring, when Murphy then joined and looked like he was going to team up with Rollins, and then psyched him out and attacked him instead! The Mysterios refused a handshake from Murphy and left. I am really excited to see some Rollins and Bryan after a period of time away from each other. At least we’ll have Murphy to drive a wedge between the months long Rollins and Rey and Dom feud.

Lars Sullivan def. Jeff Hardy – Before the match, Triple H and Stephanie went through their spiel hyping up the “Season Premiere” of SmackDown and introduced some of the players. The Street Profits came out and Roode and Ziggler attacked, which started a huge brawl that ended with Lars being sent out of the ring by Jeff Hardy.

Jeff got some offense and hit Whisper in the Wind, but Lars kicked out and pushed him to the other side of the ring. It was a noble effort, but Lars’ Freak Accident got the victory. J-A-double R-E-double T looked on from one of the ThunderDome screens and just shook his head. That’s… relevant apparently.

Tag title match gets a ref stoppage – This was quick and as we now know, unnecessary. This could have been really good as a regular match without nonsense.

This was a very good episode of SmackDown, aside from the silliness with the tag titles. It’s been a few weeks! This may also have been the first SmackDown, or any WWE show for that matter in quite a while, that had no women’s match on the whole show. Odd choice for the “Season Premiere.”