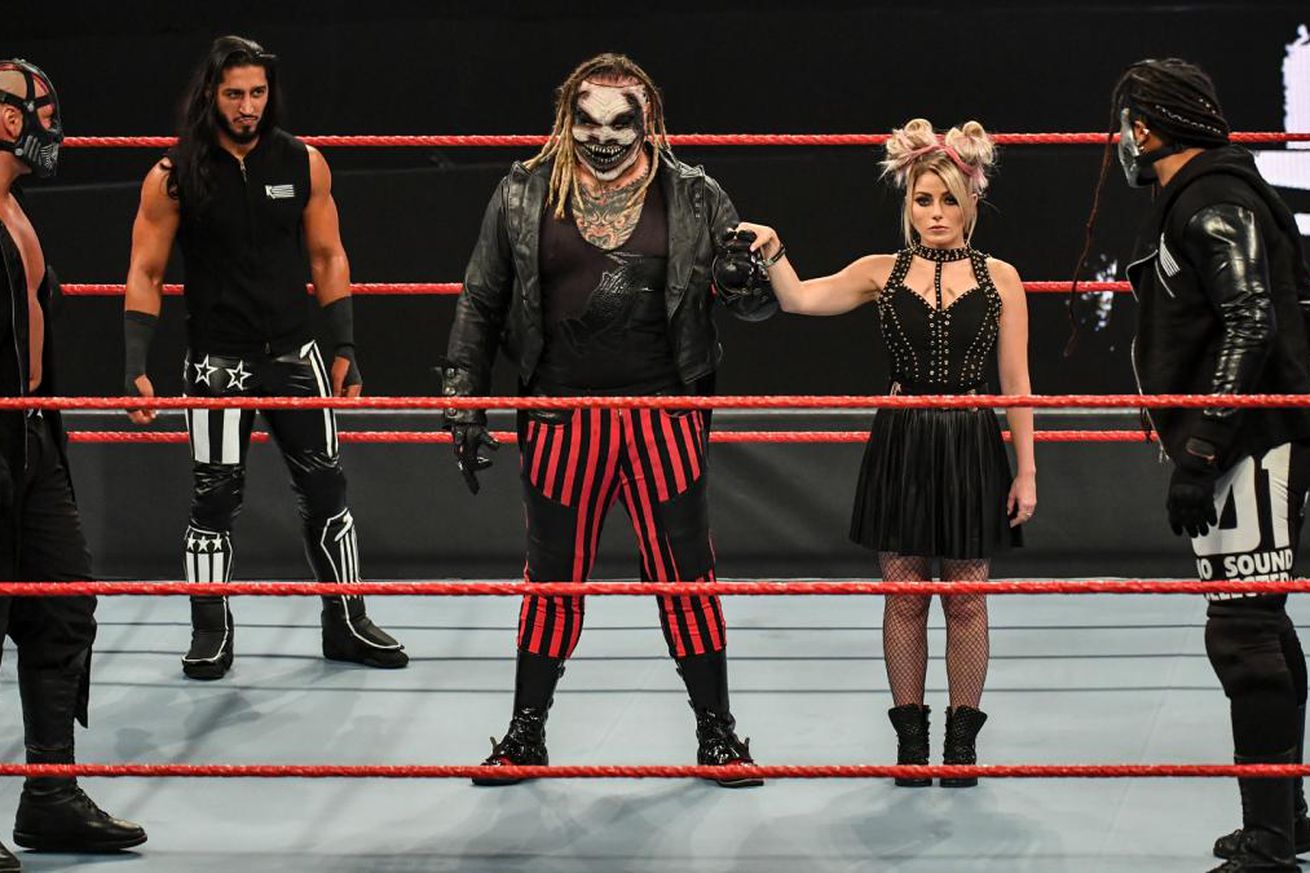 This show is what happens when you don’t plan shit out.

RETRIBUTION was murked. What the hell?

No damn plan at all. This group started out as everything Fox News wants you to believe Antifa is, then booked them on some shows in segments that didn’t cause the chaos that they supposedly craved, random segments here and there with Hurt Business and Rey and Dominik Mysterio.

Then they had to quarantine due to another WWE COVID-19 outbreak. Then Mustafa Ali was revealed as their leader! Finally RETRIBUTION was going somewhere!

And then the next week they weren’t on the show. Tonight, they lost their first real match via tapout to Lashley. Then the Fiend took all of them out. All four men. By himself.

This is what happens when you don’t plan shit out.

So later on, Mustafa Ali revealed himself as the SmackDown hacker. Probably the only thing that was planned, but decided to drop for whatever reason. They drafted Ali to Raw when they had an angle going on, already on television that people liked, and just moved the main dude over to the other brand!

There’s no “wait and see”. There’s no “give it a chance”. This sucks. They killed this act when it was just getting some traction. You suck, WWE.

We’re out of time!

McIntyre called Orton intelligent for taking out the men he was celebrating with after Clash of Champions. He knew that he accepted Orton’s challenge at Hell in a Cell out of anger. Even though he doesn’t have experience in the cell, the life experiences he’s had makes up for it.

Orton in the main event, sat in a chair in the middle of the cell and said he’s never left a piece of himself behind every time he’s walked out after a match. He listed off his matches and the opponents he faced.

Orton was about to say that Drew facing Brock at WrestleMania was legendary, and then Drew interrupted him and walked to the door of the cell. Orton told him he’ll have to wait until Sunday to get to him since the door was bolted shut. But Drew found bolt cutters pretty quickly off to the side of the ThunderDome.

… And then the show ended.

What the hell? I’ve enjoyed pretty much all of Drew and Randy’s interactions, but this was by far the worst one. And it’s the go home show for the pay-per-view. If this was supposed to keep me on the edge of my seat for Sunday, it didn’t do its job.

In fact, most of what we’re in store for on Sunday that involves Raw isn’t exciting for me whatsoever.

AJ Styles def. Matt Riddle – AJ Styles has a bodyguard now, and it’s the extremely tall dude who guarded the Raw Underground door. He’s very big. Very intimidating. So much so that the referee couldn’t even do his job for the first minute. I actually really liked the ref pleading with him to get out of the ring.

Riddle was very intimidated, too. The behemoth blocked him from getting to Styles at one point, and then balled up his fist and scared Riddle back into the ring. And right into a Styles Clash for the win. I’m intrigued by this new pairing of Jordan and AJ. If McIntyre retains on Sunday, I would really like to see the interactions between he and Jordan if AJ is next for the WWE title.

Kofi Kingston def. Sheamus – Kofi had some decent offense before the commercial break, but then Sheamus dominated. The most awesome part was seeing Big E in the ThunderDome crowd and it gave Kofi the power of positivity for a few moments to gain momentum. Also loved Xavier telling Samoa Joe that Kofi had a lot left after he heard him question Kofi’s ability on commentary. New Day just puts a smile on my face, y’all. I really needed it.

Alexa is in the Firefly Fun House – Bray’s surprise for all his fans was Alexa knocking on the door at the end, telling us we’re in for more fun. I’ve been waiting for her to show up in my once favorite children’s show. SpongeBob ain’t got nothing on the Fun House. Excited for what’s to come!

Braun Strowman def. Keith Lee – Keith Lee was able to toss Braun around like we’ve never seen before. Sadly, WWE can’t keep one cool thing in one feud, as Braun won by low-blowing Lee “without the ref seeing” even though he definitely was in position to see it. After the match, Lee crushed Braun’s nuts with his foot. Rightfully so. This wasn’t great.

Asuka def. Lana – It went longer than I thought, but ended exactly the way it would. After the match, as DJ Khaled would say, “Another one.” You know what happened. Please continue to tell me in the comments that it’s not exactly what I’ve been saying it is.

Nia Jax and Shayna Baszler win a pointless match – Let me ask, what was the point of doing this match if they weren’t having someone defeat the tag champs to set up a title match? I don’t usually like making people #1 contenders that way, but at least it’s something. Also, Lacey and Peyton? Lacey? Peyton? This could have been the IIconics! Why split them up to put Peyton right back into a pairing with someone else? It could have been a one-off, but the way they had them acting exactly like Nia and Shayna, something tells me that will continue.

EL GRAN GORDO – Nothing else about anything that happened here matters. I HOWLED when Otis came out in that ridiculous get up.

Elias sang – This was about 7 or 8 straight minutes of an Elias concert that sucked, followed by Hardy playing a guitar solo and swinging for Elias’ head while telling him he didn’t try to run him over months ago on SmackDown. Sure Jeff, that’ll make him believe you.

The draft was supposed to make this show better. So far, it didn’t.