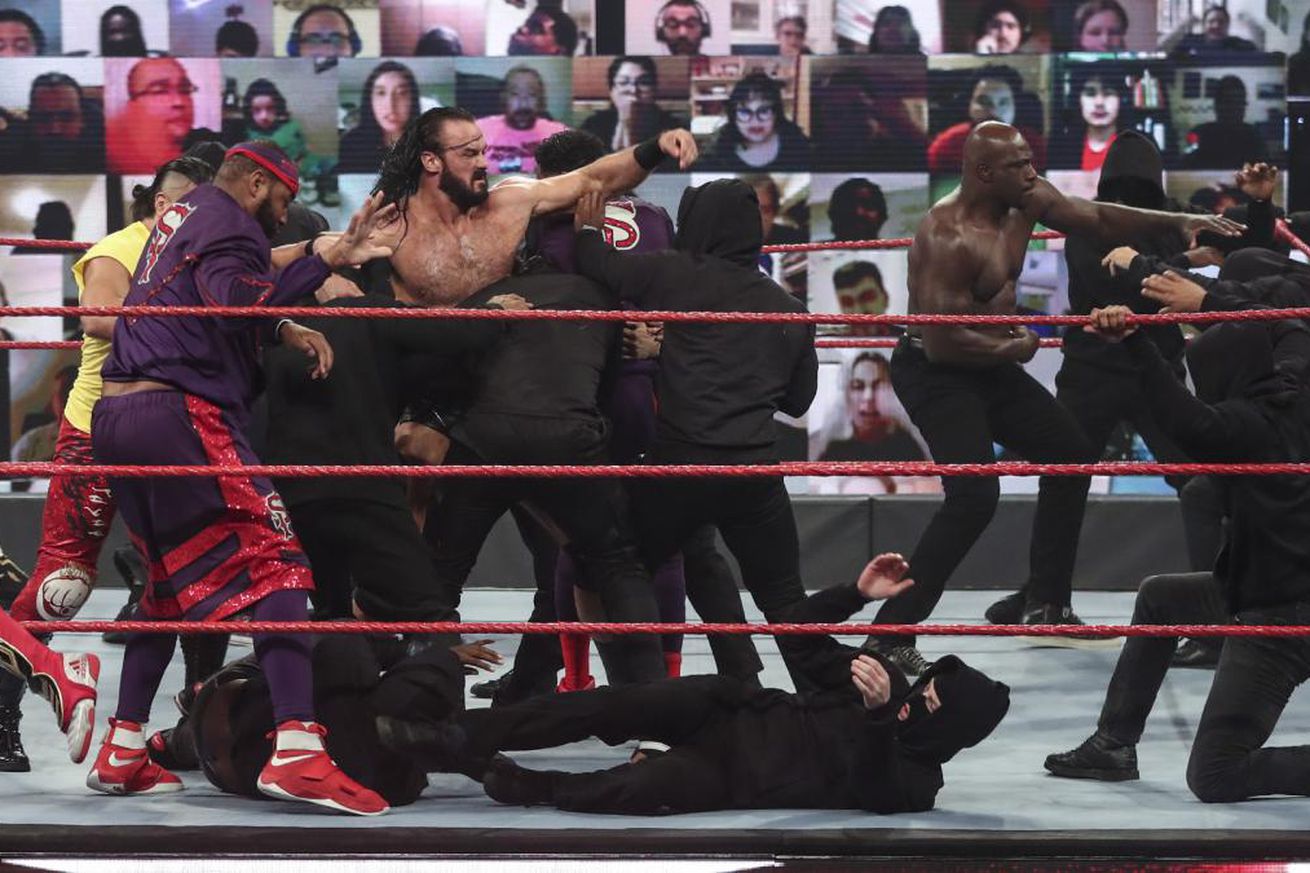 I was enjoying the start of this show, until Mia Yim told us that WWE gave them contracts.

I know we have to get there somehow, but… like that? So now RETRIBUTION can do whatever they want to anybody? Were they not doing that before?!?

The Hurt Business came out to confront them. When they got blindsided by 8 more RETRIBUTION members, Cole called out for help, and no one answered.

So the question I want answered is – If it wasn’t already obvious as a shoot that they don’t care about the well-being of their “independent contractors”, how does any Raw wrestler feel about WWE management in kayfabe? They’re allowing these guys to be on the show and now they’re getting paid! The logic and sense they tried to make of this was very poor.

The anarchist group caused chaos throughout the night backstage, but the Hurt Business one upped them.

Mace, T-Bar, and… SlapJack took on Shelton Benjamin, Bobby Lashley, and Cedric Alexander. Cedric just had a match an hour prior to this so I was confused as to why it was him and not MVP. But once again, the dreaded DQ finish played a role.

T-Bar attacked and then more of the group came out, but then FINALLY the Raw roster led by Drew McIntyre came out and whupped their asses. It only took TWO MONTHS!

And then an RKO outta nowhere to Drew by Orton ended the show. We’ll talk about that part of the show next.

If this was done weeks ago, I would have felt more excited seeing the roster run down and take them out. Drew needing to fight after getting attacked by Orton previously shouldn’t have been what the roster needed to step up to RETRIBUTION. I’m sorry but this did nothing for me.

I have appreciated the story between McIntyre and Lee.

A friendly bout between two good acquaintances with stakes is never a bad thing.

Last week they didn’t do anyone any favors with RETRIBUTION being the shadow figures they were (and thankfully aren’t anymore), but this week they did it right. Lee had every right to be upset with McIntyre too, butting in on his matches with a veteran like Randy Orton.

Having said that, what in the hell is with all of these DQ finishes?

More of Lee’s matches on the main roster have ended like that than haven’t! How are we supposed to get into a new up and comer with no decisive wins?

Orton to his credit had a great explanation as to why he showed up. He’s been here for 20 years and he’ll never give up a WWE championship opportunity. I can’t say I disagree with his thinking. And who didn’t legitimately laugh out loud when he thought he got 4 Claymore Kicks and then said live on air that oh shit no actually it was 3! And he enjoyed that pain because it reminded him of what he’s capable of.

An ambulance reminds people of a lot of things, but for Orton it’s his 14th title reign. He’s going to flatline McIntyre’s at the pay-per-view. I really enjoyed this promo, not just for the great oops-a-daisy moment, but Orton’s just a great talker this year and his passion for his promos make them must watch.

I would like to have more definitive ends to matches, though. Now, I can see them making the title match a triple threat since Orton punted Lee. But, then that will be just another match Lee loses because he’ll be the one in the back of that ambulance regardless of which of the other two men are slated to win.

Keith Lee deserves better than that.

Andrade and Garza def. Mysterio and Carrillo, and Rollins and Murphy – This match had the potential to be all over the place, but I really liked what they did here. Humberto and Dominik cleaned house to start with all the great high flying, Murphy put the work in and had incredible selling on Andrade’s spinning elbow, and Andrade and Garza were a successful team. To top it off, Rollins did absolutely nothing. It was… perfect, to be honest. And the right tag team won. It was just a bit confusing as to how two of these groups who technically broke up were back together without any explanation. I’m eager to see how Andrade and Garza continue without Zelina Vega though.

Rollins once again left Murphy high and dry and the fact that he even went into this match thinking Rollins would be a good tag team partner is poor planning on Murphy’s part. Dude has the Stockholm Syndrome bad.

Apollo Crews def. Cedric Alexander – Very fun fast paced bout between these two men. Cedric Alexander cut another great promo before the match about how he stood by Crews’ side through title shots he didn’t deserve in the first place. This feud is bringing out a fierce side of Crews that I love so much. After Crews upset victory, Hurt Business all ganged up on Crews and Ricochet.

So this pretty much established The Hurt Business as non-alignment because they’ll defend Raw for management and stop RETRIBUTION from attacking McIntyre and Lee, but then gang up on babyfaces they’ve been heels to. Alright, I can roll with this.

Rey Mysterio is not the father… again – This was really stupid. How they decided to get continuity with Rey’s daughter was Rollins revealing the results of a DNA test which showed that Rey was not the father of Dominik originally, but then played the footage of last week when she caressed Murphy’s arm for a moment. Then he said it could have been for his daughter. Then Rey called her naive and she got upset and stormed off. I really just want this feud to be over with already, and now it’s undoubtedly continuing past Clash of Champion. Ugh.

Peyton Royce vs. Asuka ends in DQ – Royce got some nice offense in and had a decent showing against Asuka here. But of course, we had to have a DQ finish because it wouldn’t be Raw without it.

KO Show – Shane McMahon came on to promote Braun Strowman vs. Dabba-Kato for Raw Underground and they played up the tension between them, while KO said that he had Shane fired but “oh look you’re back!” That was a funny moment. Then Shane brought on Dabba-Kato unannounced but KO knew that Shane would try to play up he and KO’s moment on Underground from the Aleister Black fight, and brought out Braun Strowman. While they toyed around with attacking each other, Aleister Black attacked Owens’ nuts with the turnbuckle a few times.

Dabba-Kato and KO will be fun down the line, but I don’t understand why they are continuing the Aleister Black feud. Well, actually yes I can – feuds don’t end on this show. They’ll probably face each other until the Royal Rumble at this point. Because every feud needs to have a 1-1 with a blowoff to make one person go over the other. And then repeat that by 4.

EST vignette – Really great vignette (kind of strange having one of these since she’s been on the roster for a while but hey it’s something) for Bianca Belair. She was besting this one Performance Center dude for the whole thing and I loved it. I love her. She needs to be on television more.

Zelina Vega def. Mickie James – Vega showed a real vicious side of her which I’ve been wanting to see in the ring. Her backstabber was just… man my back flinched after seeing that. I’m more interested in Vega vs. Asuka so this was the right call, but I do feel bad for Mickie James. I hope they don’t shove her to the side after this.

Little Jimmy is back – Nothing else matters about the 24/7 title right now. I popped for this return!

Raw Underground – Dolph Ziggler and Arturo Ruas had a two minute mat wrestling match which Dolph won, and then Braun got in Shane’s face about sending men home to their mommies with a pocket full of teeth. And that’s exactly what he did to Dabba-Kato and I’m upset about that. New big dude did not need to lose to Braun Strowman. Why, WWE? Why make a great looking new up and comer lose a high profile match?

I can finally say that Raw wasn’t as inconsistent as they’ve been in the past few weeks. I’m just… not feeling it. Orton was great, Zelina’s fury, Little Jimmy is back, and I’m excited for Orton vs. McIntyre, but Raw is not fun to watch right now. STop with the disqualifications! Draft! Draaaaft!

What are your Raw predictions for Clash of Champions, Cagesiders?

EC3 is coming to ROH