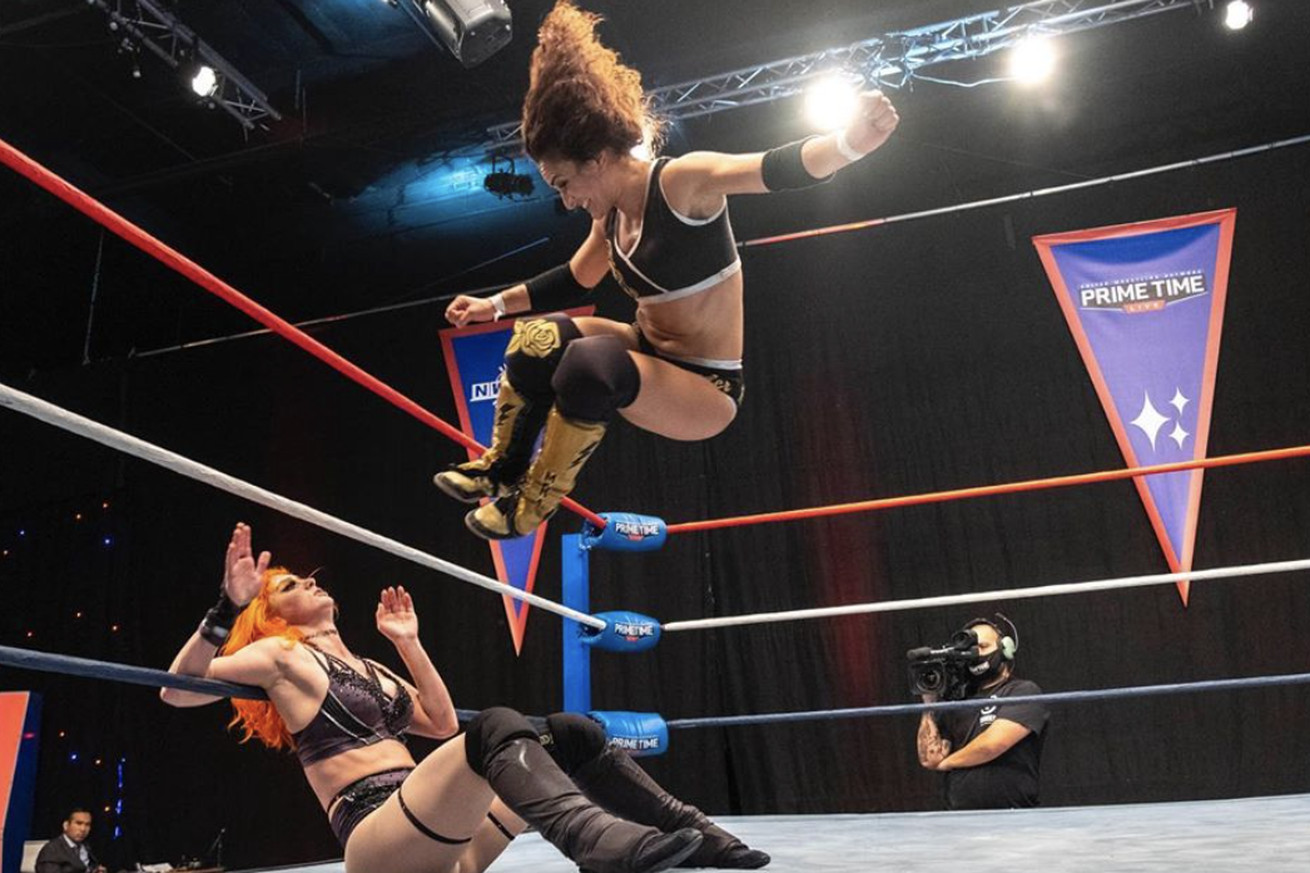 Thunder Rosa is on the warpath. La Mera Mera Destruction Tour whirled into Jacksonville, FL last Tuesday to blow through Ivelisse on AEW Dynamite. Next stop was Buda, TX to overcome the challenge of kaiju power from Lindsay Snow in Mission Pro Wrestling. Thunder Rosa continued her voyage with a visit to Hollywood, CA last night. Her task was to complete her third NWA World Women’s Championship defense in six days. Priscilla Kelly was Thunder Rosa’s opponent in the main event of the Primetime LIVE (Sep. 22, 2020) weekly PPV series from United Wrestling Network and NWA.

Hell’s Favorite Harlot was itching for a fight after six months on the bench. She’s been training her ass off despite the current coronavirus pandemic.

Does Hell’s Favorite Harlot have what it takes to dethrone the Queen?

The match was a gritty, aggressive fight. Both women competed like their livelihoods were on the line. Thunder Rosa and Kelly battled for over 20 minutes. They battered each other in the first third of the bout. Kelly rammed Thunder Rosa’s shoulder into the ring post early.

Thunder Rosa controlled the middle section of the contest after countering a suplex into a standing elbow drop. Thunder Rosa got cocky after a rear naked choke attempt and ran into a hip toss to armbar transition from Kelly. Thunder Rosa escaped to latch a grapevine heel hook. That led to rolling pinfall exchanges and Thunder Rosa sitting deep on a crab then rising for a pendulum submission. Kelly fired back with a fury of kicks. Thunder Rosa countered for a neckbreaker. Kelly rolled out of the ring onto the entrance ramp. She suckered in Thunder Rosa for an octopus stretch, but Thunder Rosa powered out for a Death Valley Driver onto the ramp.

The final stanza kicked off with big blows from both women. Kelly hit a couple heavy suplexes for near pinfalls. She focused on Thunder Rosa’s tender shoulder by using more octopus holds. The champ would not be denied her glory. She escaped via Samoan drop. Thunder Rosa dug deep into the well of exhaustion to explode with a big knee, a running dropkick, then a Thunder Driver to win.

That was a heck of a fight. I stress the word fight. It was physical and mean. Thunder Rosa and Priscilla Kelly should be feeling the bumps and bruises this morning.

Hat’s off to @thunderrosa22 and @priscillakelly_, they just had an absolute war for the @nwa Women’s World Championship. Priscilla’s got nothing to be ashamed of she took La Mera Mera to the limit. #andstill @FiteTV

In other NWA action on Primetime LIVE, Eli Drake defeated Watts via Gravy Train. It was also announced that Aron Stevens (fka Damien Sandow) will defend the NWA National Heavyweight Championship against Trevor Murdoch next week. Allysin Kay will step into the squared circle as well next week to compete against Serena Deeb. That seems fit for a #1 contender match to Thunder Rosa.

Who would you like to see become Thunder Rosa’s next challenger for the NWA World Women’s Championship?

Sasha says Bayley is ‘not a star,’ plans to end her on Friday

Jazz confirms that she has wrestled her last match ever