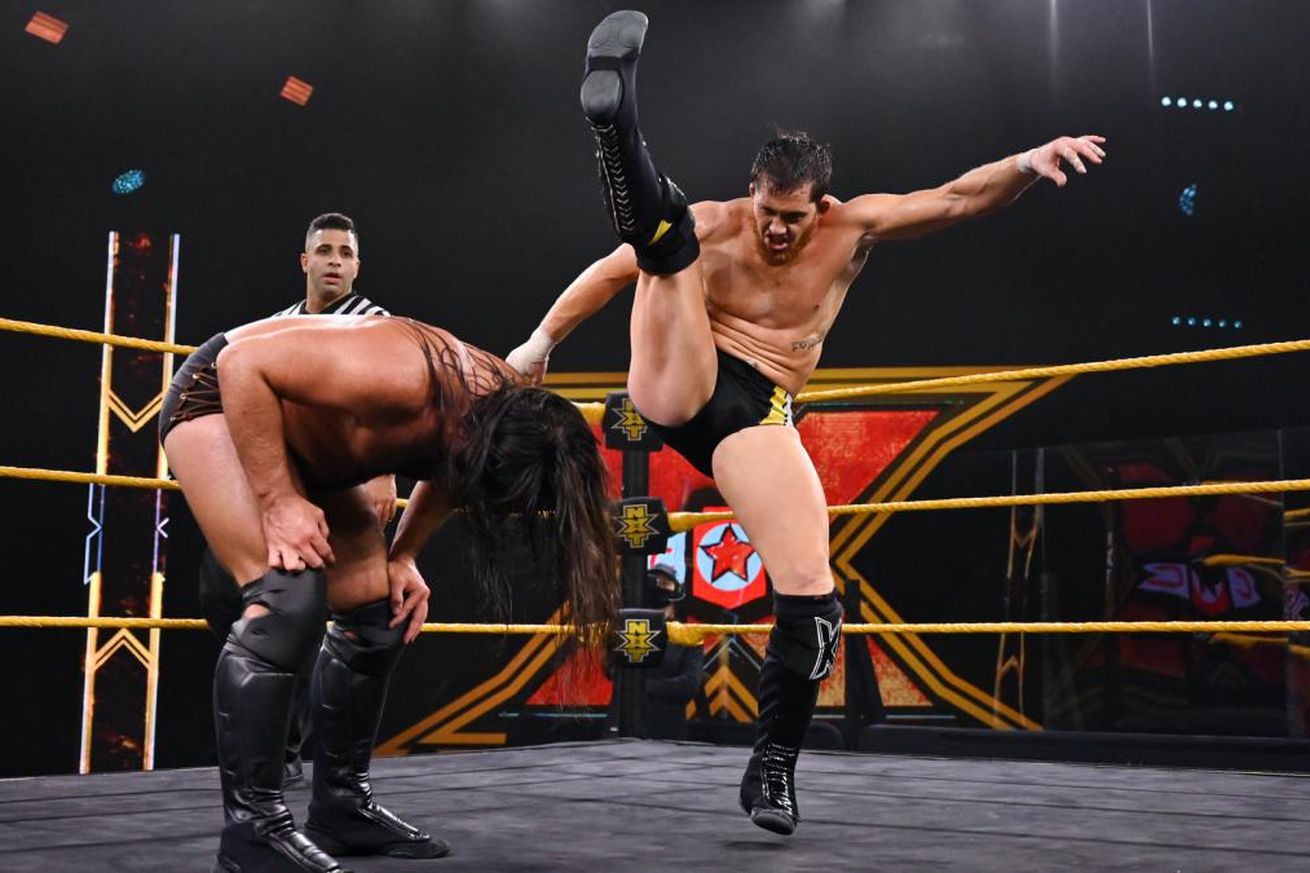 NXT returned last night from Full Sail University in Winter Park, Florida. You can find the results at the live blog here.

We finally got some new blood in the NXT title scene.

That would have been the case no matter who won this week. None of these men have received a one on one title shot. (And I don’t think a group one either.) But Kyle O’Reilly’s victory felt like the right choice.

Despite being the tag team guy in the Undisputed ERA, he has the Brazilian jiu-jitsu background to be a believable singles competitor right away. Not that Timothy Thatcher’s style doesn’t make him believable too, but he just lost to Finn Bálor less than a month ago.

Cameron Grimes is really entertaining, but I wouldn’t buy him in a title match, despite having a tainted win over Bálor before. Kushida was attacked by Velveteen Dream, directly leading to his elimination, furthering that feud which could get a TakeOver spot. Bronson Reed could fit that role, and they did a great job making him look like a beast once again here. But KOR is the best choice.

The match itself was new, but the staggered entries didn’t really feel like a big deal. They were able to use it at the end of the match to point out O’Reilly was fighting uphill since he started the match and Grimes was the last to enter, but that really never felt like a factor. If they booked this as a standard fatal 5-way elimination match, I don’t think it would be too different.

But as a fatal 5-way elimination, it was very good. As mentioned, they did a great job booking the big man. He manhandled everyone when it was one on one. It took a team effort to get him down. (The missed splash into the KOR top rope knee didn’t look impressive enough to finally end him, though I can imagine why that beat him.)

With Big Thicc finally out, we got some great action between Thatcher and O’Reilly given their unique styles. O’Reilly eliminated Tim as well, being able to avoid getting his leg picked and instead pinning the man.

Right after that pin, Cameron Grimes delivered the Cave In, which in most situations would end it. That move is very protected. But KOR was able to get his foot on the rope and a celebrating Grimes had to get his head back in the game.

O’Reilly ended up using a dragon screw on the Carolina Caveman’s leg, which paid dividends when Grimes tried and missed a second Cave In. That tweaked the prior targeted leg and KOR immediately locked in a heel hook for the win.

Kyle celebrated in the ring with Adam Cole and Roddy Strong so there aren’t any issues with Undisputed just yet. (Bobby Fish wasn’t on the show in general.) We’ll see how long that lasts.

I’m excited for the match Kyle and Finn will have in a week and a half. O’Reilly has a more unique style and Bálor is a great worker so they should make some magic.

It was a fun match. There weren’t as many legitimate women as the numbers would have someone believe. Maybe half the competitors was made up of women we haven’t seen on TV much if at all. They served as fodder for Raquel González and Rhea Ripley as they showcased both women as heavy hitters, eliminating most of the field. (Raquel looked to have the most in this match.)

The other showcase in the match was Kacy Catanzaro’s creative elimination saves. It seemed like a third of her time in the match, she was doing something to avoid hitting the floor, whether it was handstands, scaling the guardrail, or walking on her partner’s shoulders. These were all fun and likely received the time they did because there weren’t that many featured talents in the match.

Raquel and Rhea eliminated each other, indicating that their showdown is in the near future. It looks clear that González is getting a big push, and they’ve done a good job building her up quickly. It’ll be interesting to see what that means for Dakota Kai.

Speaking of Kai, she was one of the final four of the match. It was her, Catanzaro, Shotzi Blackheart, and Candice LeRae.

Dakota and Kacy were quickly eliminated. That left Shotzi and Candice to work together for a few minutes. It was another strong showing for Blackheart, who’s been impressing big time lately.

They ended with a battle on the ring apron and the steel stairs that had some high drama spots prior to LeRae kicking Blackheart off the stairs onto the floor.

Candice is the correct choice here. We know we’re going to get a great match at TakeOver. Shirai and LeRae had a great match last year and I expect it to be better this year. Their bout a year ago felt like a coming out party for both women within NXT. But they don’t need that any more. Now they can go out and kill it.

It’ll be surprising if Tegan Nox doesn’t play a part in that match, given Candice injured her before this battle royal so revenge is a-comin’.

Jake Atlas showed more of that fire he showed last week in his match against Tommaso Ciampa.

Psycho Killer’s vicious attack weeks back lit a fire under Atlas that he didn’t have before. He showed some real aggression this week, even attempting to slingshot Ciampa under the ring like Ciampa did to him. The referee stopped him, but it proved he’s no push over.

Tommaso ended up winning. That’s not surprising. He opted not to win with Willow’s Bell but instead stop the pin to deliver the Fairytale Ending. But despite the loss, Jake showed the aggression he needed, especially since they saddled him with the “I’m rooting for you, Drake Maverick!” gimmick on debut which did him zero favors.

– Damian Priest defeated a very game Austin Theory. After pretty much getting his ass kicked by Kushida last week, Theory took the North American champion to the limit. While that seems a bit out of balance, the idea that Austin is very talented but very raw could easily answer for why he has better weeks than others.

– Odd couple tag team of Roddy Strong and Danny Burch defeated odd couple tag team of Fabian Aichner and Raul Mendoza. This was the brain child of mad scientist Fandango, who was using a British accent which William Regal didn’t appreciate. Now Undisputed and Oney Lorcan and Danny Burch will face each other to earn the right to face Breezango. That was a very very good tag team match at a TakeOver two years ago.

– Ridge Holland had a showcase match where he may have murdered a man with headbutts.

This was a good show. Both #1 contender matches delivered in the ring and set up strong matches for TakeOver.

Triple H thinks WWE is brewing up the next Stone Cold vs. The Rock

The WWE Draft is only an illusion of change