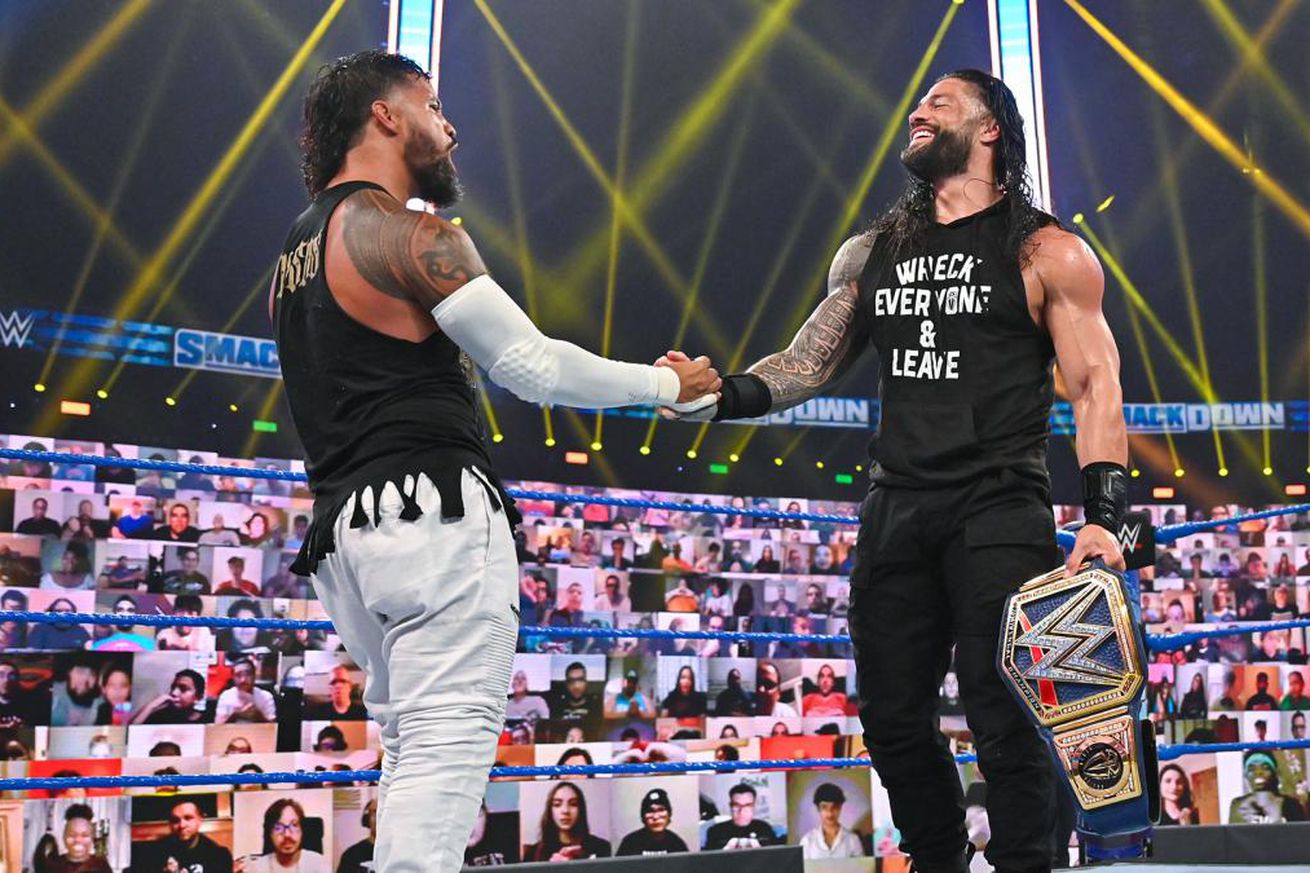 Jey Uso and Roman Reigns should be tied together through to the end of this title run. | WWE

Join us on Fantasy Booking Island for a tale of family, how you treat them, and the power of positivity.

Looking forward to Clash of Campions: GOLD RUSH, I’m enjoying the story of the mostly quiet and nefarious Roman Reigns and his upbeat cousin Jey Uso. We’re set to wonder how much Reigns will beat his brother into oblivion, and that’s about it.

And the more I thought about that, the more I realized it’s kind of weird, right? That we’ve got a title match with a clear winner, where the challenger’s presence isn’t really intimidating? This kind of happens all the time — Bobby Lashley had bad odds against Drew McIntyre at Backlash — but for it to all be so clear cut? That got me thinking. Why is Jey Uso the number 1 contender?

Reigns could have nerfed any babyface in his inaugural defense. Imagine if he obliterated a game and willing Chad Gable? The aggression and ruthlessness would have equally been there.

So, let’s think about what Sunday could mean for Jey Uso. A humbling loss to his big brother, to whom he owes a favor, could reposition Jey as a captain to his cousin’s Tribal Chief.

And that would be dramatically most useful when the biggest threat to Roman’s run eventually makes it to contention. Yes, I’m talking about Big E.

Right now, the Cameo king himself is toiling away in a feud with Sheamus that’s probably meant to give him a chance to fight someone historically more brawny than even the master of the 5 count himself. We know Big E is strong, but when he emerges from this feud with Sheam-O? He’ll be stronger, right?

Then, in the months leading up to the Royal Rumble, Big E probably gets a title shot at some point. And that’s where his old chum — remember how much The Usos respect The New Day, that was love when they stood aside to help the chances of Kofi’s WWE championship opportunity — will be forced to bend the knee and twist a knife.

Then, Big E is pushed back to the bottom of the totem pole. And at the Royal Rumble, he should run the length of the match, demonstrating endurance by entering at 1 and being the last man eliminated. At some point, Jey — and possibly Jimmy, whose injury window should have him healthy by January — would team up to eliminate E. And whether Big E beats them on his own, or has Kofi or Woods there to help him, he makes it through.

All throughout this, you have Big E struggling with Jey’s decision to live in his cousin’s shadow. Kofi and Xavier join in the chorus. You can even have Jimmy and Jey argue about it. The audience would see Jey becoming tired of living in his own Uso Penitentiary.

Eventually, Jey can’t stand his morals being questioned this much, and leaves his cousin’s side.

Then, at WrestleMania, you have Big E vs Roman, for the title, and with nobody but Heyman in Roman’s corner. And on his own, Reigns will still be a challenge, but having lost his cousin to the power of positivity, he’s not as protected, and Big E wins the big one on the Grandest Stage of Them All.

The story is about family, and how you treat them. Roman has already been letting Jey do all the work, let’s see that continue and get more and more unfair. Let Jey wreck everyone, so Roman can leave the champ.

But eventually, taking advantage of his bloodline costs the Tribal Chief. And three friends who treat each other with respect, who stuck together in the face of adversity to see Kofi climb the mountain, get to show us the power of positivity all over again.

Let us know what you think about this trip to fantasy booking island below.