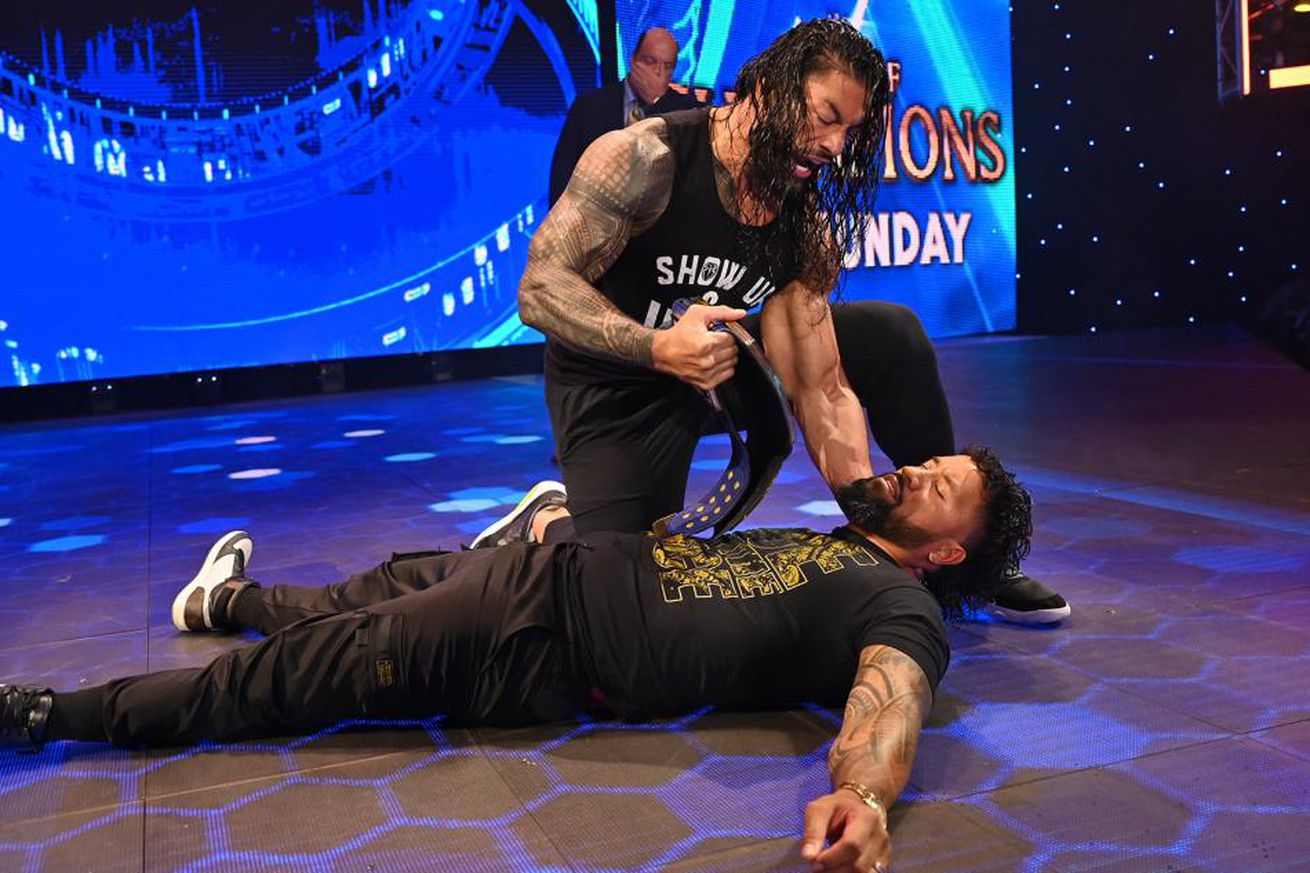 Jey saw the look that everyone was talking about last week, and he wanted to know what that was about.

WWE put together another incredible video package, including Rikishi, Jimmy Uso, Afa, and Sika! They talked about Roman and Jey through the years, and brought the family aspect of this home. So well done.

Later on, Roman told Jey that he wouldn’t know what to do with the Universal title, because Jey doesn’t get the weight and the pressure of being a top guy. The Anoa’i family relies on Roman to be the tribal chief. Jey will never not be compared to his brother and he’ll never get the chance to replace him.

Jey then asked Roman what if he’s wrong? And by doing so, had a starmaking performance.

“You’ve been on top. There goes the big dog, the main event, Mr. WrestleMania. You know what they say when they see me? Which one are you?” I felt that line. Jey swung for the fence as hard as he could to hit a home run. And then Roman reached up and ripped it away from him, courtesy of a Superman punch.

Very rarely do I legitimately and truly get hyped for a match where the result is known. Roman Reigns is winning on Sunday, but maaaan y’all I am HYPED to see this match. Bravo to both Roman and Jey Uso delivering promo of the year contenders back to back. They are invested in this, as am I, as are many others who have waited for Roman to be a badass without having to be saddled with poor booking.

What’s next for Roman? Well, Alexa Bliss shot him a death stare similar to his own on Jey’s last week after her match with Lacey Evans, and that should make for a very intriguing program post pay-per-view.

My favorite part of all of this is how delusional Bayley has been.

Bayley thinks Sasha being in her corner didn’t help her? Really? Silly, silly Bayley. Though you won’t find me painting Sasha as a babyface in this scenario like many others have. Yeah she was attacked twice, yeah it was brutal, but we all know that way before this, she was shooting those heel turn looks behind Bayley’s back for months.

As Bayley said two weeks ago, she had to do it first. That makes sense to me. And the writing was on the wall after they both lost the tag titles because as I said that night, Bayley knows that Sasha is her fiercest opponent on SmackDown and it would have only been a matter of time.

The question is – will Sasha cause Bayley to lose, or cause Bayley to win on Sunday? Personally I’d rather they hold off on doing the match between them, but it’s WWE and you know they love giving it all away as fast as possible.

As fast as possible, and then beat us to death with it.

Lacey Evans wins via DQ – Alexa Bliss took a lot of Evans’ offense, with a few comebacks, but Lacey was able to control a decent portion of the match. Then the Fiend’s laughter echoed through the arena. When they returned from break, Bliss was getting ragdolled around and tried regrouping. She started to rally, and then you could tell she was off.

The Fiend took charge of ThunderDome and played his music. Bliss flipped a switch, beat Evans up and caused a DQ. She got Lacey outside and hit another really good Sister Abigail. I’m loving everything they are doing here. Then she did what I mentioned above. Sister Alexa at the Fiend’s side for his rematch with Roman… I like it.

Sami Zayn def. AJ Styles and Jeff Hardy – No, you’re right – we’re not at Clash of Champions yet. A triple threat two days before the pay-per-view triple threat? WIth the same men in both matches? Is that how bad creative is now? (Well we know how bad it really is!) The camera cuts during this match seemed like much more than normal. I don’t know why it felt that way, unless it really was the case, but it felt like enough that I noticed it.

I would have said that the finish we saw for this match (Sami taking advantage of a Phenomenal Forearm to Jeff) was going to happen on Sunday, but now I’m not sure. Out of the three, I want Sami to win. Regardless of that, AJ is the only person who has the right to complain, in my opinion. Remember back when Jeff won the title off of him, I said exactly what AJ has been saying – Jeff… kind of cheated! I just love Sami so much that I feel like he loses the most if he doesn’t become the true champion again.

Shinsuke Nakamura def. Gran Metalik – Kalisto and Lince Dorado (who looks really good in slacks and a button down shirt by the way) did not argue over who Metalik should be listening to this time. Metalik is great with his in ring style, though he did have a slip up early in the match after he lost his footing a bit on the ropes. Nakamura hit a great Kinshasa we almost didn’t see thanks to brilliant minds in production. The tension between Lince and Kalisto is starting to enter Andrade/Garza territory. Just do it already!

King Corbin def. Matt Riddle – In Matt Riddle’s few short months on SmackDown, nearly all of it has been feuding with Corbin. Like I said before, they love beating us to death. I really hope this ends soon. Even though it seemed like it was ending from Riddle’s post match interview, I don’t believe it one bit. I just didn’t care about this at all. The one positive – I will always love End of Days. I don’t talk about that enough, but it’s one of the most protected moves in WWE and Corbin is really good at delivering it.

Dreadful – There are only two legitimate SmackDown men’s tag teams. They were involved in a match on this show. That’s it. Tucker and Otis haven’t teamed up in months, Miz and Morrison suck, New Day is not around at the moment, only one Uso is on the show, and… I don’t know I feel like I’m Forgetting about a team. This shit with Heavy Machinery and the Goon Squad is terrible.

SmackDown is ready for Clash of Champions, and so am I. Roman and Jey are going to tear the house down, and the booking for Bayley and Nikki Cross should be very interesting. The match where I already know who is winning is the match I am most looking forward to. I can’t believe I’m saying that, but they blew me away here.

What are your SmackDown predictions for Clash of Champions, Cagesiders?

You toxic idiots aren’t getting to Carmella

NXT is damn good at calling an audible