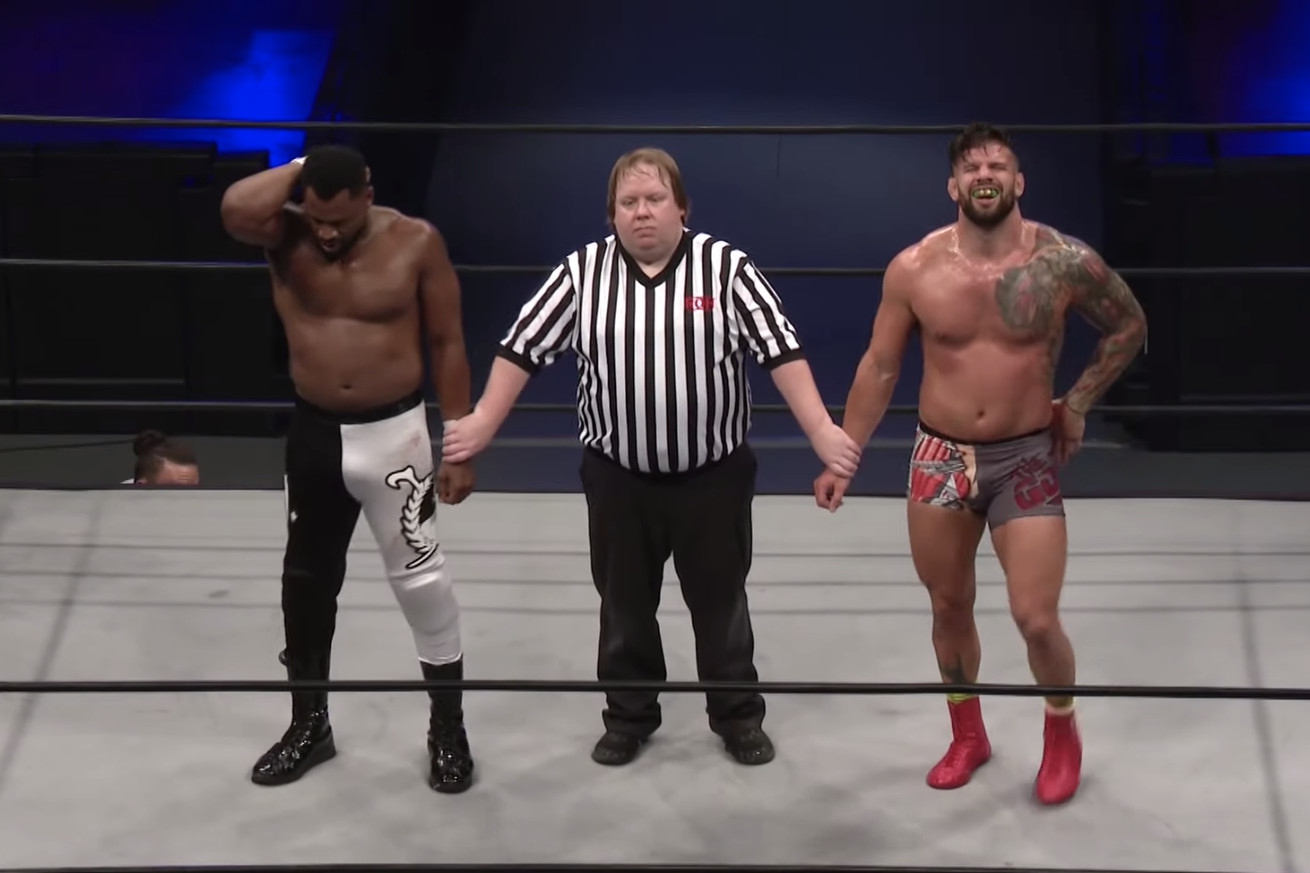 Let’s break down the show.

Quinn McKay opened with a recap of last week’s bouts and comments from the winners. David Finlay wears the NJPW colors proudly in competition against ROH. His shoulder should be okay after some recovery time before his next match. Matt Sydal is feeling high on life. He is destined to carry the legacy of the Pure Championship.

Time for the hype video of Fred Yehi and Silas Young.

Yehi is a savageweight. Wrestling gave him focus to avoid negative influences growing up. Yehi can hurt people in many different ways. He plans to wear Young down for the Koji Clutch. Young has been training BJJ for this tournament. He believes his experience in Pure matches will lead to victory.

15-minute time limit. The handshake became testy when Yehi would not let go. The bout began with back and forth tumbling on the mat. Yehi had the first moment of success with a standing Indian Deathlock. Yehi turned Young over with the submission still intact, but they were too close to the ropes. Young reached out to use his first rope break.

As the match progressed, Yehi took control again with a rapid flurry of driving knee strikes to Young in the corner. A spinning backhand to the back of the head gave Yehi a window to apply the Koji Clutch. Yehi was losing control, so he transitioned into a crucifix pin. Young escaped to avoid defeat.

It was now Young’s turn for dominant offense. He exploded with running boots and a tornado DDT. Yehi kicked out. The match started picking up steam from there.

The savageweight hit a German suplex then a running cannonball into the corner. Young came back with a counter suplex and a superplex, but Yehi caught Young off guard for a roll-up. Young had momentum again and went for a springboard maneuver. Yehi rolled out of the way. In the center of the ring, Yehi stomped Young’s foot. He took Young down with a leg sweep then transitioned to an inside cradle for victory at 13:00. Yehi advances to the second round of the Pure tournament.

Let the hype commence for Josh Woods and Kenny King.

Woods is out to prove he is one of the best technicians in the world. He plans to exploit King’s weakness of being an arrogant showboater. King is looking to win gold as one more step in the Ingobernables’ domination. He is not taking this fight lightly, despite Woods’ goofy spirit. Kings will use his kicks to set up his finisher. He advised Woods to call the Ghostbusters, because King will be like a ghost in that ring.

15-minute time limit. King used his speed to toss Woods to the mat, but Woods’ grappling skills gave him control. King sat down on the mat to taunt Woods. That was more a sign of arrogance than actually trapping Woods with jiu-jitsu. King got a scare when Woods used a kimura to transition into a triangle choke. King quickly pulled away to regroup.

Later, Woods snatched an ankle lock then a sort of double ankle lock. King crawled out of the ring to fall out of the hold. The referee ruled it as a rope break, even though, King never touched the ropes.

Back in the ring, Woods caught a slingshotting King in a fireman’s carry. Woods went for a knee strike, but King blocked it. Woods did unload knees in the clinch though. Woods reared back for a punch only to realize his fist was closed. King capitalized in that moment of hesitation with a closed-fist punch of his own. The referee issued a warning to King.

Woods had a powerful sequence of a Superman forearm, an overhead belly-to-belly suplex, and a running knee to the gut. King kicked out. Woods continued with a fireman’s carry knee strike. King astutely rolled out of the ring to recover. Back between the ropes, King hit a surprise Royal Flush cutter. Woods moved his arm under the rope as an involuntary reaction during the pinfall. The referee considered that a rope break by Woods.

The match went down to wire. Woods countered for a super twisting neckbreaker. Both men exchanged blows and roll-ups. 90 seconds remaining. A little bit of corner fighting got down to 60 seconds remaining. After a knife edge chop duel, Woods Irish whipped King into the corner then across to the opposite corner. King ducked a running knee strike. He rolled under to catch Woods with a single-leg crab. 7 seconds remaining. King sat down deep with only 5 seconds to go. Woods withstood the pain as time ran out for a draw.

The official winner was decided by the judges. ROH Director of Operations Gary Juster, ROH Dojo coach Will Ferrara, and former Women of Honor World Champion Sumie Sakai came to a split decision. They awarded the fight to Woods. Commentary explained that Juster chose King and Ferrera chose Woods. Sakai was the swing vote and used King’s illegal closed-fist punch as the determining factor.

Josh Woods advances to the second round of the Pure tournament.

Another week of solid action from ROH’s Pure tournament. I like the choice of winners. Yehi’s explosiveness was impressive. He was so quick when unleashing a chain of attacks. Woods’ wrestling background should be quite suitable to provide Pure excitement in his next bout.

Battling to a draw was an interesting call. I like that it will keep us guessing for future contests, since no finishes are guaranteed. I wish ROH would have milked the judging drama a bit more by announcing each individual vote rather than an overall decision. It felt a little rushed at the end with commentary scrambling to explain the victory.

My vote would have went to Woods. He often won the grappling exchanges and connected with more impact moves. The case for King would be that he was the closest to victory when Woods was lucky enough for his arm to be under the rope on the Royal Flush pinfall. King also had the single leg crab at the buzzer, but I’m not buying Woods wouldn’t have escaped if given the time.

One thing I didn’t like is that King was allowed to go for a pinfall after his intentional closed-fist punch. King wasn’t using that as an intended strategy, but it does open the door for someone to bend the rules on purpose to win with a knockout punch. Why wouldn’t a wrestler try that tactic? The potential reward outweighs the negative risk. I’m against being allowed to reap those benefits for victory, because it is against the spirit of the Pure competition. It would be lame to go to the effort of these special Pure rules only to result in a cheap sports entertainment win.

Let’s take a gander at the updated bracket.

Next week’s episode will feature Tracy Williams versus Rust Taylor and PJ Black versus Tony Deppen.

Share your take on episode 471 of ROH Wrestling. Which of the two bouts did you prefer? Whose performance stood out most? Did you pick Kenny King or Josh Woods as the winner of their draw?

Impact’s wrestle wedding ends with a gunshot to the groom