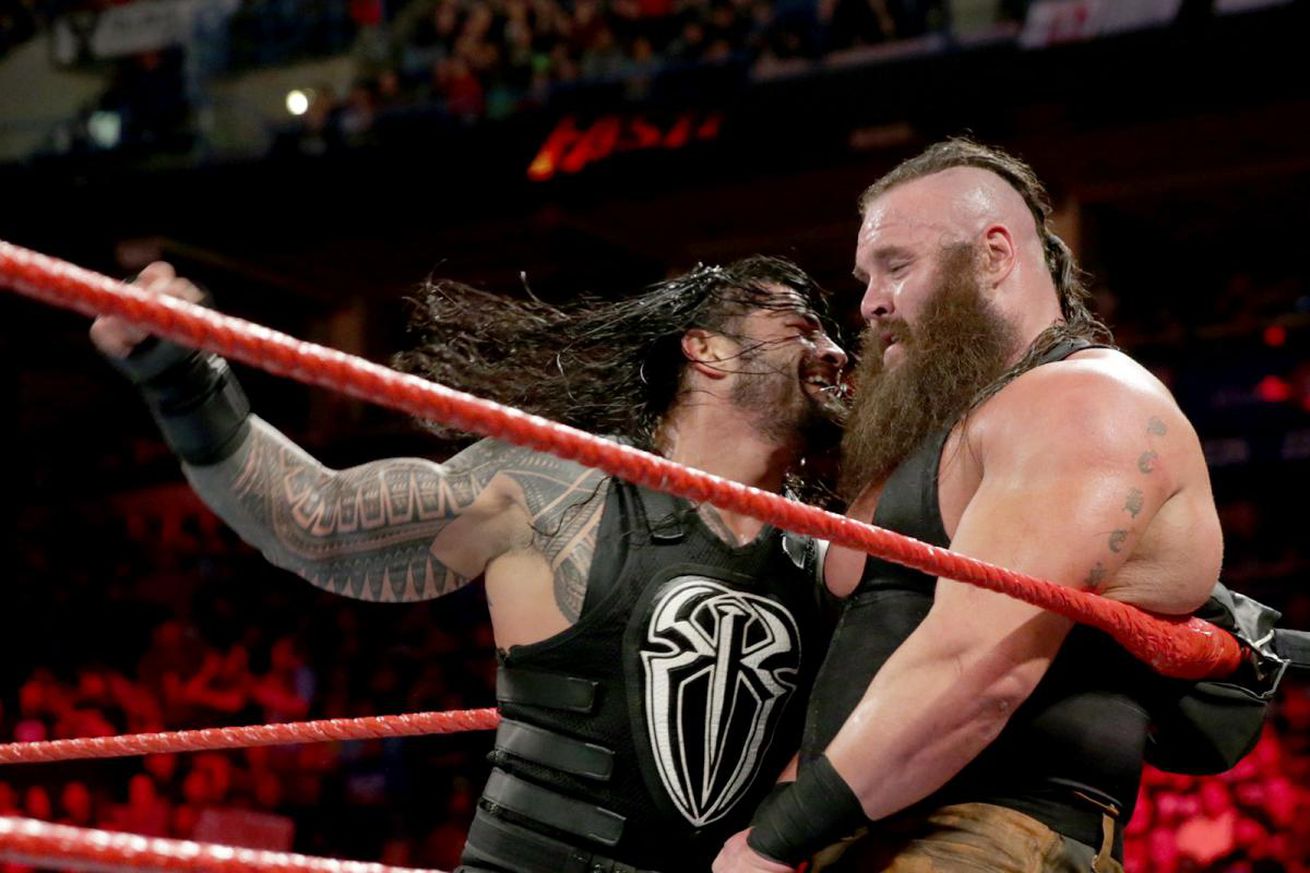 WWE SmackDown returns tonight (Oct. 16) from the Amway Center in Orlando, Florida. They are calling this the season premiere of SmackDown.

WWE is trying to promote tonight’s episode of SmackDown as their exciting season premiere. But in reality, it’s a lame duck episode.

With the WWE Draft finishing up on Monday, the rosters are shaken up. But because they wanted to book this show in advance to help with ratings, they booked a bunch of it before the new rosters were finalized. And because of that, they advertised a handful of matches that feature people who are on different brands and won’t see each other after tonight.

The biggest match announced for tonight is a Universal title match between Roman Reigns and Brawn Strowman.

This match is not completely random. Strowman lost his title at SummerSlam before Roman charged onto the scene and firmly grabbed it. So this could be seen as him getting a one on one rematch before going to Monday, a match Roman doesn’t think he deserves. But because Braun is going to Raw, it’s very clear that he’s not going to win this title. It also means this isn’t leading to any further story between the two. It’s a match with a predictable outcome involving one guy who isn’t even on the show any more.

They also booked Jeff Hardy vs. Lars Sullivan. This was set up last week when the Freak returned and attacked Hardy and Matt Riddle. But like Strowman, Hardy was moved to Monday. So again, we can pretty easily guess that Hardy is going to do the job to help establish the big man on his way out.

The other cross brand match has a little more emotion to it, and that’s the New Day’s final match together against Sheamus, Cesaro, and Shinsuka Nakamura. Xavier Woods and Kofi Kingston were moved to Raw while Big E is staying on Fridays. Sheamus is also a Raw talent.

This will be the last time the guys team with each other for awhile and that’s a big deal. It’s our chance to see them together one final time before they go their separate ways. (This being wrestling, they’ll surely reunite, but it won’t be soon.)

However, none of this feels like a “season premiere.” A season premiere of a television show sets up a brand new season. This is more along the lines of an epilogue to last season. They are tying up some loose ends before everyone goes their separate way to start their new stories.

One program that isn’t a lame duck is SmackDown Women’s Champion Bayley and Sasha Banks’ blood feud that will enter Hell in a Cell at the end of the month. Given both women are staying on SmackDown, that match doesn’t have to be the end of their rivalry. However, Hell in a Cell should be the place that feuds end, not where they begin.

Sami Zayn is staying on SmackDown so will need to find some new blood to defend his Intercontinental championship again. Apollo Crews is a possibility given he’s a former United States champion. Also, Zayn’s old friend and enemy Kevin Owens is back on the same brand with him. Sami as heel and KO as face would be a new dynamic for them in WWE.

The former Raw tag team champions the Street Profits were drafted to SmackDown. With the New Day on Raw holding the blue belts, Adam Pearce decided they should just switch them, making the Profits the SmackDown tag team champions. Does that count as two title reigns for each team? The Profits will defend against Bobby Roode & Dolph Ziggler tonight.

Shayna Baszler and Nia Jax are still the Women’s tag team champions, but the only team on SmackDown are Ruby Riott and Liv Morgan, who they just beat.

– Daniel Bryan returns to the ThunderDome for the first time! I’m excited to see who he’s going to work with next.

– Otis is free of all distractions. No Miz & Morrison. No girlfriend. No best friend. So now he can focus on trying to cash in his Money in the Bank briefcase.

– Big E defeated Sheamus last week and is ready for his next feud. They separated him from Kofi Kingston and Xavier Woods for this singles run so they better not drop the ball with it.

What will you be looking for on SmackDown’s season premiere tonight at 8 PM ET on Fox?