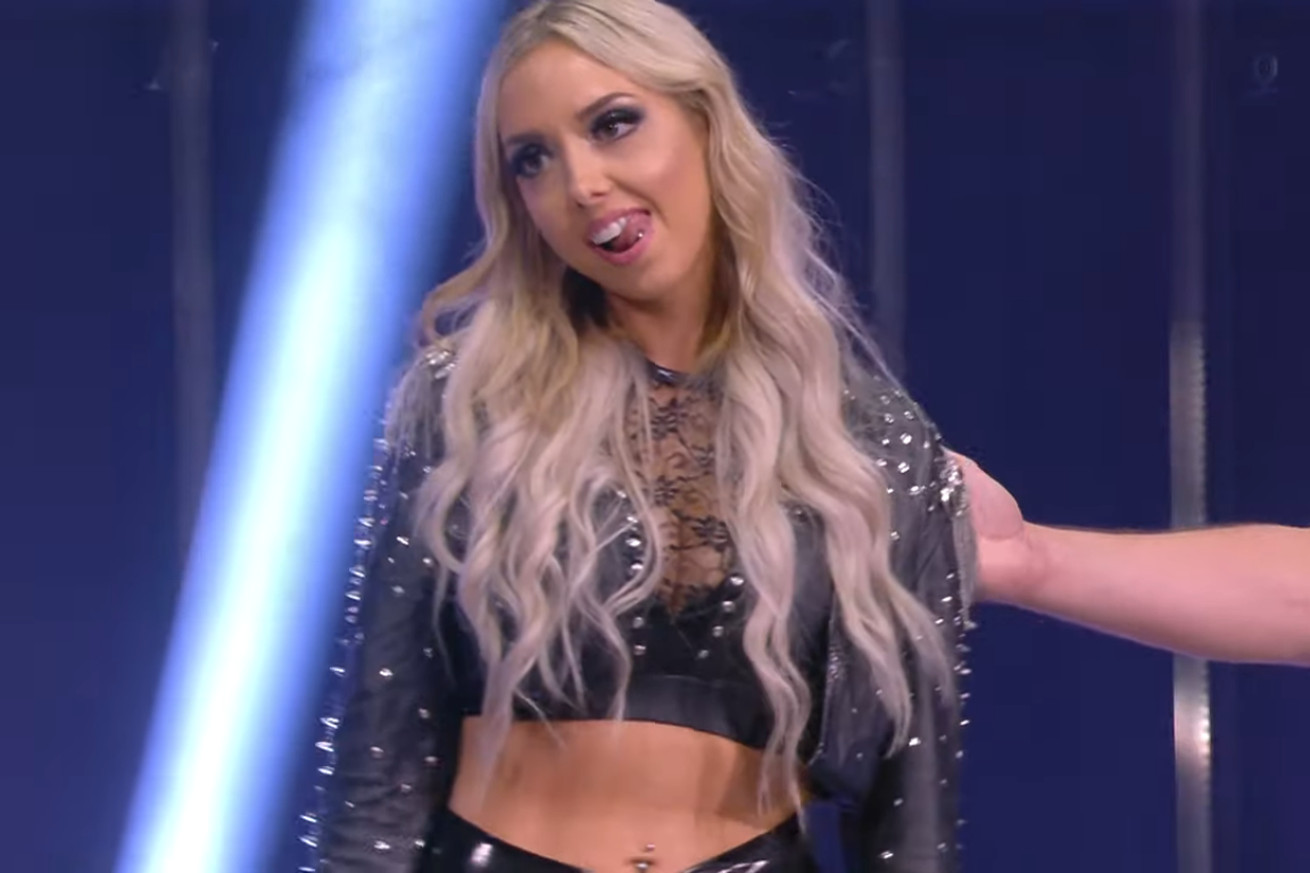 Episode 57 of AEW Dark featured tune-up bouts for participants in the #1 contender tournament, more heat brewing between Shawn Spears and Scorpio Sky, as well as a shocking return.

Let’s jump right into that return. The Bunny is back!

Leave it to Eddie Kingston to introduce Allie for maximum effectiveness. He came out during QT Marshall versus Pentagon to reveal Bunny. QT had a thing going on with Allie. Not anymore.

Later in the show, Kingston cut a promo that his family is back together, and they will make everybody pay.

Here’s the Dark lineup with ratings (watch, solid, okay, pass) on which matches are worth your time toward Dynamite:

The big moment was Bunny’s return. Spears and Sky continued cooking their beef by slightly increasing the temperature. As for the matches, take your pick. 16 contests made me lose focus, and they all blended together.

Excalibur teamed with Taz to call the action. Justin Roberts was the ring announcer. Ricky Starks danced his way to the commentary table to sit in after his match.

Tully Blanchard was ringside. This bout was a continuation of the brewing feud between Spears and Scorpio Sky. After some mockery from Spears, Daniels got off early with an exploder suplex and a slingshot plancha. Spears rebounded by whipping CD into the guardrail then a neckbreaker on the floor. The bout progressed with each man escaping the other’s finisher on several occasions. In the end, CD slingshot into the air. Spears caught him on his shoulders for a C4 to win.

After the bout, Spears hit a second C4. He exited the ring for Tully to hand him steel for his black glove. Sky appeared entering through the backside to prevent another attack on CD. Spears was frustrated at Sky ceasing another memory, so Spears punched a stagehand instead.

Dustin Rhodes was ringside. Brandi displayed nifty mat skills to open the bout. King was no pushover, but Brandi was in charge for the most part. Big Bran Bran won with a pump kick.

During Brandi’s match, John Silver came out with a sign campaigning to be on A Shot of Brandi, which is Brandi’s cooking show on YouTube. Alex Reynolds ushered Johnny Hungiee to the back. The distraction had no effect on the bout.

Ali did not appreciate Starks’ attitude, so Starks ratcheted up the intensity to make a statement. Ali had a flurry of offense stifled when Starks knocked him of the turnbuckles. A boot to the face and a double underhook pickup into the Rochambeau gave Starks absolute victory.

Fuego gave Sky more trouble than expected. The masked man was rattling off maneuvers until Sky caught a flying dropkick to cinch in a Scorpion Deathlock. Sky sat down deep for the submission win. After the match, Spears’ music played as a form of mind games. Spears never came out.

Jungle Boy sprayed down Luchasaurus with mist during the dino’s entrance. Solow took control after a swinging DDT off the apron. Luchasaurus roared back for victory on a clothesline, tail whip kick, chokeslam, and standing moonsault.

Eddie Kingston accompanied his family for their entrance but did not remain ringside. The Blondes had hot tag momentum that was promptly ceased with the meat men dodged running attacks. Butcher sent Pillman packing out of the ring. Garrison was executed with a neckbreaker/powerbomb combo finish.

Dustin Rhodes was ringside. Kingston came out during the match to distract QT by having Allie come out as Bunny once again. QT still fought hard despite a broken heart. QT hit a Michinoku Driver. As he went for a cutter, Pentagon pushed him off, kicked him in the gut, hit a Mexican Destroyer, and a package piledriver for the 1, 2, 3.

Luchasaurus returned the favor to mist Jungle Boy. KTB looked good hitting plenty of powerful moves. In the end, KTB missed a moonsault. Jungle Boy clobbered him in the back of the head and connected on a flying knee drop to win.

The Latinas fought with fire and rage. They took care of business with a double backdrop diver, facebuster by Diamante, and a snapmare by Ivelisse rolling over to kick her opponent in the face for the win.

Reynolds and Silver came out mid-match for support. Colt shooed them away. They returned like idiots and almost cost Colt the match. Cabana recovered by getting his knees up on a flying attack. Colt charged into the corner for a hip smash. He used a Superman pin to win.

Reynolds, Silver, 10, and Anna Jay joined 5 for his entrance. 5 kicked butt and won with a wing snapper.

Frankie Kazarian hyped the #1 contender tournament on Dynamite. He is one of the most overlooked and underutilized wrestlers through history. Kaz is after all the AEW gold.

[email protected] has made it clear on what he has his sights on.
Watch #AEWDark NOW via our Official YouTube Channel ➡️ https://t.co/CjvNuT9NBE pic.twitter.com/KwA5jmT4zj

Angelico was ringside. Kaz knocked Angelico’s shoes off on a leg drop between the ropes. Both Kaz and Evans did cool moves. Kaz won by countering out of a reverse DDT to hit a reverse DDT. Afterward, Angelico attacked with an ankle lock. Daniels ran in for the save.

5 and Anna Jay joined on the entrance. Reynolds tried to recruit Valle, but he turned down the invitation. Dark Order won with their triple team whirlybird move on Valle.

Destruction. Wardlow won via knockout with his knee. He hit an F-10 after the bell.

Kingston brought the family back together. The Lucha Bros are the best tag team in the universe. Butcher & Blade have Bunny back by their side. Now that the family is one, everybody is going to pay.

Sydal worked the knee and won with the Cobra Clutch.

Joey Janela was ringside. Fenix’s aggression was too much for Kiss’ finesse. In the end, Fenix clocked Kiss with an uppercut on the turnbuckles then pounced with a spinning musclebuster for victory.

This episode of Dark had too many matches, especially when all 16 are inconsequential. The performances were fine, but my mental fortitude could not keep up. It was hard to maintain the focus that the wrestlers deserve. But hey, free wrestling is free wrestling.

I really hope we get some more exploration and explanation about Bunny’s return. In my opinion, one thing that needs to be addressed is the intimacy between Allie and QT. If Allie just strung QT along for money, then both Blade and Allie can be chalked up as jerky heels. Yeah, QT will look like a schmuck, but AEW already presented him like a schmuck before trifling with Allie.

I also want to hear Brandi’s reaction. She has too much history with Allie just to have this moment not be acknowledged.

The gamesmanship between Spears and Sky was entertaining. I appreciate those little touches taking place on Dark. I also liked the interaction to set up a future fight for Kaz and Daniels against Evans and Angelico. It felt like AEW was throwing us a story bone to keep us invested in so many showcase bouts. Thanks!

My favorite moment of the show was Sky’s Scorpion Deathlock. He sat so deep on that sucker. The pain radiated through the screen. That submission is a nice addition to Sky’s arsenal. It was neat how he applied it as a surprise. Now, Sky has two finishers that can come out of nowhere.

Share your thoughts on Dark. Who stood out most for episode 57?