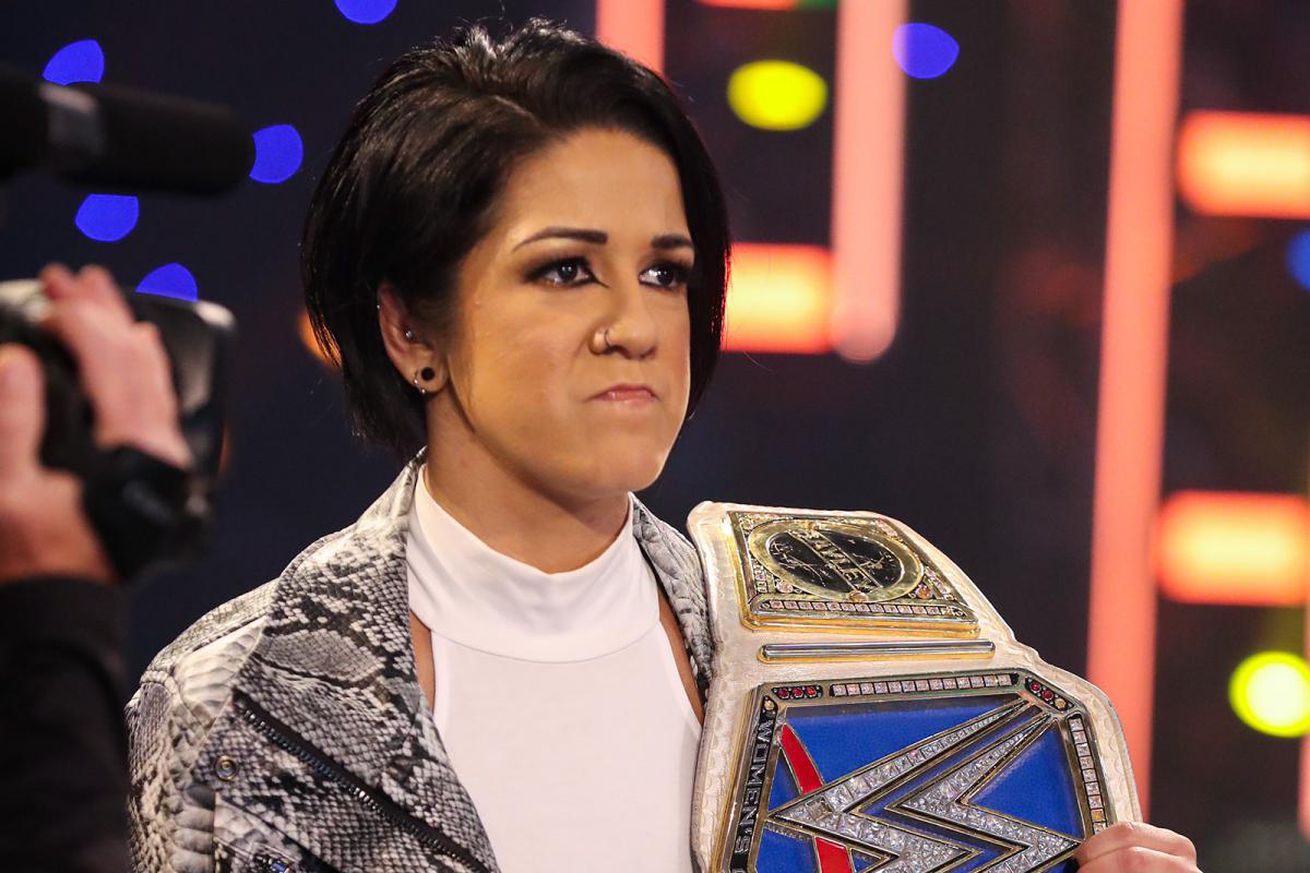 WWE returns to pay-per-view (PPV) — if your cable provider is carrying the event, of course — tomorrow night (Sun., Oct. 25, 2020) from the Amway Center in Orlando, Florida, with its Hell in a Cell event starting at 6:00 pm ET with the Kickoff show leading right on into the main course at 7 pm ET on the WWE Network.

Luckily for you Cagesiders, our staff of learned wrestling blowhards is here to help figure out just how the event is going to play out with predictions for each match on the card.

Hell in a Cell predictions

Geno Mrosko: It seems clear this is a months long feud they want to drag out for some time, and if that’s the case they can’t give the babyface the title win right away. Pick: Bayley

Sean Rueter: Bayley didn’t do anything wrong in kayfabe, and she’s a more well-rounded performer. Yeah, I said it Sasha stans. The good news for y’all is (a) I’m picking with my heart and (b) I’m almost always wrong no matter what I pick with. Pick: Bayley

Kyle Decker: It’s weird to have the first match in Hell in a Cell, but that’s what happens when you have a scheduled gimmick PPV instead of using the stipulation when it’s appropriate. It almost feels like they rushed to get here because of the gimmick. Do they do more afterwards? Probably. But I think it’ll be the rematch where Bayley attempts to win back her title. (And against Sasha Banks, it’s a good chance she will.) Pick: Sasha Banks

Cain A. Knight: Banks is a pretty good bet to win the title on pay-per-view soon, but will it happen in their first such match? If this wasn’t Hell in a Cell, I’d go with the heel. But this is Hell in a Cell, so the babyface should go over. Pick: Sasha Banks

Stella Cheeks: It would be quite the choice if Sasha Banks lost this match. Not only has Bayley been ducking her for weeks showcasing her fear of The Boss, but Banks has Hell in a Cell experience. She’s chased down the champ and now it’s time to enact her revenge in the most hellacious way possible. Pick: Sasha Banks

Geno Mrosko: I would love it if there were literally any justification for Uso winning here but there isn’t, so I cannot give that prediction, even in jest. Pick: Roman Reigns

Sean Rueter: Jey, The night of the fight, you may feel a slight sting. That’s pride f-ing with you. F pride. Pride only hurts, it never helps. Say “I Quit,” bend the knee, and keep eating off the Tribal Chief’s table. Pick: Roman Reigns

Kyle Decker: Love this story so much. It’s proof that you can have a program where the finish is not in doubt and it still rules. Pick: Roman Reigns

Rev. Claire Elizabeth: I want it. I want it so bad. I can *taste* a Jey Uso title reign, and it is delicious. But it’s not meant to be— Roman will win, the Usos will fall in line, and the Bloodline will reign SmackDown with an iron bracer. Pick: Roman Reigns

Cain A. Knight: Do you remember at Clash of Champions when Jey Uso had no chance to beat Roman Reigns? His chances have not improved over the last month. Pick: Roman Reigns

Stella Cheeks: You can put this match in a cell to give it gravitas, but the fact remains that Jey Uso has a zero percent likelihood of walking out the champion. Pick: Roman Reigns

Geno Mrosko: You know what? I’m doing it. After everything, it seems clear McIntyre is the better man here — after all, he’s won every match, outside of a tag team bout — and that’s why it’s going to be such a surprise when Randy beats him. Pick: Randy Orton

Sean Rueter: Randy’s 0 – 2 in this series. I’ve picked Randy twice. There’s really no reason to do the change now given Raw’s post-Draft roster. One of us is getting off the schneid here. Pick: Drew McIntyre

Kyle Decker: Early on in this feud, I felt Orton was the man who would eventually win this feud. But with WWE being a rather heel landscape in general, it would make more sense to keep the belt on Drew. That way he could face heels like Braun Strowman, AJ Styles, or the Fiend. (Though the Fiend really needs to go after Orton at one point too to get WrestleMania 33 revenge.) There aren’t many babyface challengers ready to line up to face the Viper. Pick: Drew McIntyre

Rev. Claire Elizabeth: I vote this match “most likely to make me wish I was doing literally anything besides liveblogging.” And it sucks because I think Drew is great and Randy’s not chopped liver but c’mon. This feud is so deep in the dirt it’s about to hit magma. Pick: Drew McIntyre

Stella Cheeks: Randy has to focus on his new clothing line. He doesn’t have time to be champion. Pick: Drew McIntyre

Geno Mrosko: I’m not really sure here, actually. I could see this going either way. Elias has kind of always been that heel they felt comfortable beating because his gimmick is such that he doesn’t need to win matches to stay over with fans. But there aren’t fans in the arena, not really, and that might be what actually ends up leading to his going on a win streak. It starts here. Pick: Elias

Sean Rueter: The irresistible force is WWE’s love of having guys they allegedly have big plans for lose big matches shortly after coming back or debuting. The immovable object is their love of having babyfaces lose matches early in programs where their character is clearly in the right. Don’t you love booking paradoxes? Pick: Jeff Hardy

Kyle Decker: Elias could use this win more, especially if rumors that they want to push him are true. Pick: Elias

Rev. Claire Elizabeth: Wait wait, maybe we have another contender for that prestigious award that I totally did not make up. Oh boy. WWE way overvalues Elias and undervalues Jeff Hardy, so there’s only one way for this one to go: Pick: Elias

Cain A. Knight: This is Elias’ first match since returning from injury. Hardy has lost an awful lot of matches lately, and I guess his woes will continue. Pick: Elias

Otis vs. The Miz

Sean Rueter: Originally, I thought WWE would have Miz win the briefcase to protect Otis from losing a cash-in. But then I realized Otis & Miz are two sides of the same coin… are you really going to take either any more or less seriously based on the result of this feud or a failed cash-in? I’m not. So… Pick: Otis

Kyle Decker: There’s just nothing to do with Otis as the Money in the Bank holder. Roman Reigns isn’t dropping the Universal title any time soon and Otis doesn’t have a chance to take it from him. (Not that they can’t tell a story about Otis trying to knock down the Big Dog.) I don’t expect Miz to do much with it either, but he can lose to McIntyre and not really get hurt from it. Pick: The Miz

Rev. Claire Elizabeth: I kinda want this to be the last straw and for Otis to snap and become a real world-beater worthy of the briefcase, but… John Morrison is going to distract him with some delicious HAMB and Miz is gonna take the briefcase home. Pick: The Miz

Cain A. Knight: I can’t take The Miz any more seriously as the Money in the Bank contract holder than Otis. They might as well keep it on Otis and have Roman Reigns destroy the big guy’s dreams. Pick: Otis

Stella Cheeks: This is their attempt to make the Money in the Bank briefcase relevant again. To do that, they have to take it off Otis, who is a huge joke for all intents and purposes. Or they keep it on Otis, and he becomes one of the few who lose a cash in. Either way, JBL is the real winner. Pick: Miz, I guess

That’s how we see the card playing out.