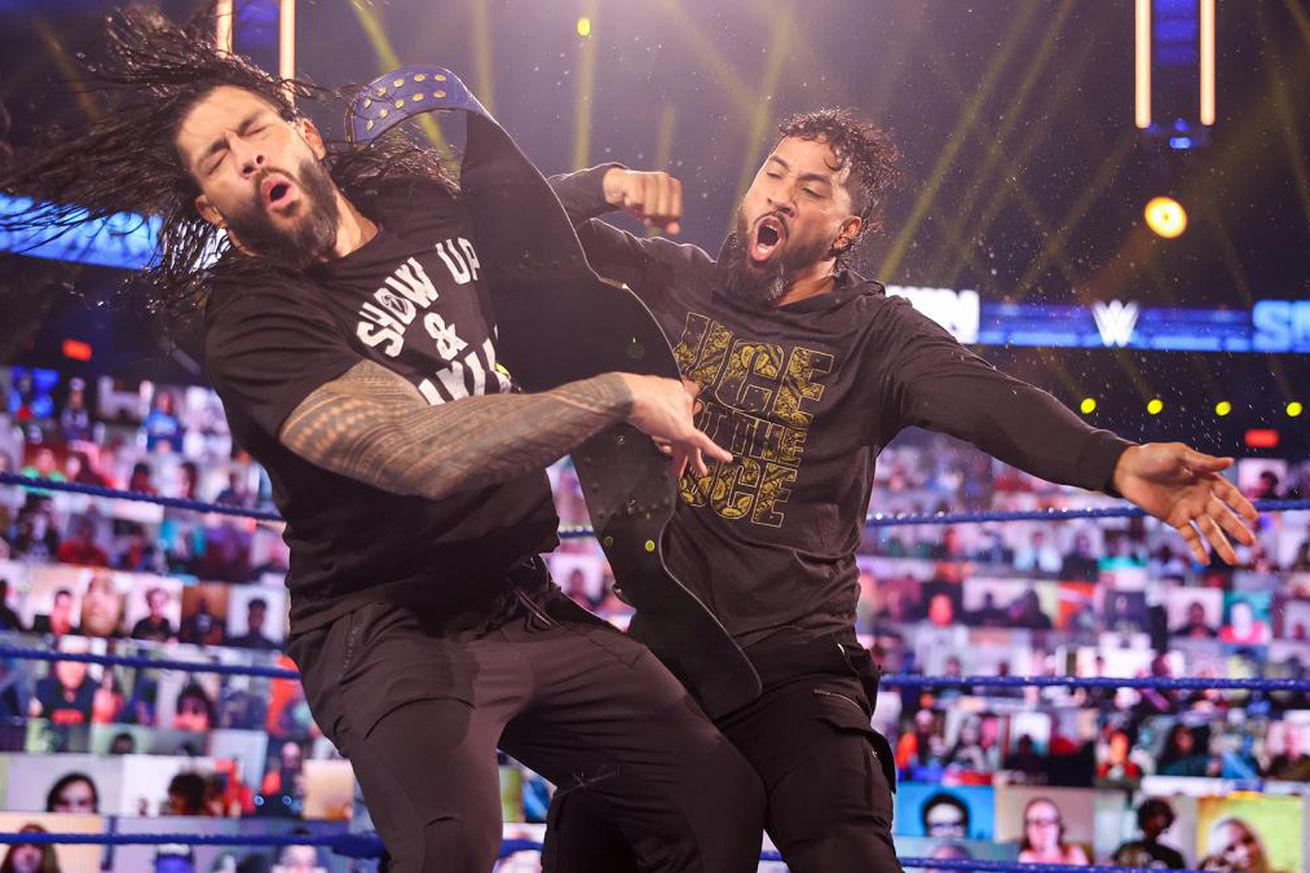 This is the best damn storyline in WWE today.

Roman Reigns is doing incredibly well in this head of the family role. The backstage VIP lounge they have him in is so mafia boss and everything great about mob movies.

Reigns came out to discuss the consequences Jey will face and Jey appeared in Reigns’ lounge, but it turned out to be Jimmy! Jey attacked Roman when he turned around and they traded kicks, with Jey getting the better of him. Jimmy came out to celebrate with his brother, but Roman grabbed the mic and said Jimmy, Jey, their wives, and their children will be excommunicated from the family.

The Hell in a Cell lowered, and Jey walked down and climbed up the cell. What a visual that was. Jey up a whole person’s length above Roman as Roman looked up at him.

This is such a phenomenal feud and while I’ve complained about feuds being too long and drawn out, I… I don’t know I don’t want this one to end! It’s shockingly great for WWE’s standards. What makes it even more incredible, is that this is the dude that Vince McMahon tried for years to force us all to see as his company’s top star. And now, he is. He is! It’s amazing.

All Vince had to do was play to Roman’s strengths. Here we are six years after the break-up of the Shield and Roman is finally who he always should have been. I cannot wait for this match.

Bayley said she can’t seem to get away from Sasha Banks no matter what she does.

She said the last thing she wants to do is give Sasha what she wants, and that’s why she isn’t signing the contract. She did what she did because she wants to be done with Sasha, but it seems she’s an even bigger pain in the ass than she was before.

Sasha Banks came out holding the contract. She got in the ring and confronted Bayley. Bayley tried to attack her with the chair she keeps sitting in but Sasha ducked under it and grabbed the title. She gave Bayley a nasty knee to the face and then she got Bayley mangled in the chair and forced her to sign the contract. That was a really cool visual, too.

I thought this was a perfect WrestleMania match, but thinking over it again, Hell in a Cell is a great match to somewhat finish the feud. To be honest, I’m not thrilled that they kept them on the same brand because Hell in a Cell should be the decisive finish. Most likely, now it won’t. They’ll have a rematch or two. Or three.

Seth Rollins def. Murphy – Match of the night right here. Murphy played the babyface in peril so well with a shoulder injury spot and Rollins took advantage of it. I absolutely loved the finish, where Murphy used the fact that he’s gotten to know Rollins over the past year. He knew when Rollins was about to do the Blackout twice and almost got a win, but Rollins one upped his former Disciple.

Aalyah was backstage watching the match, and Rey and Dom came up to her and told her to stop watching. She came out to defend Murphy after the match as Rollins grabbed a kendo stick, and she got in the ring to get Rollins away from him. Dom came in and then Rollins blindsided him. Soooooo that isn’t done yet. I really enjoyed this whole thing, though. I hope that we finish the Rollins/Mysterios stuff soon.

Lars Sullivan def. Chad Gable – I initially was worried about this, but they actually let Gable be smart! He raked Lars’ eyes and got the Freak (don’t do a drinking game with this nickname) off his game for a moment. After the match, Chad Gable, known as Shorty G, quit. In the back, Adam Pearce asked him if he really is quitting, and G said “Yes. As Shorty G.”

YAY! The Chad Gable is back. This was legitimately one of the best moments of the show. I hated this Shorty G shit, and never called him that as long as I’ve been covering WWE. Let the Olympic wrestler loose!

Street Profits, KO, and Bryan def. The Artists, Roode, and Ziggler – The KO Show before the match was all about showing off the ”new blood” in SmackDown’s tag team division, while giving us what could be the start of a new team. Yeah, a new team, from the company that loves splitting them up. The match itself was really good, with each person getting their moment to shine. They played a potential injury angle on Bryan’s knee and had an odd commercial break where the referee was at the count of 5 when Cesaro layed Bryan out on the floor and got back in the ring. He… clearly wouldn’t have made it back in the ring and the match would have been over.

Tez and Dawkins were great in this match, with Tez getting incredible air as usual for a winning frog splash. Dawkins is a great hot tag, too. After the match, Bryan was hyped backstage and told Street Profits to fist him. That’s not PG! I would absolutely love to see KO and Daniel Bryan team up. They have really good chemistry and I love seeing this Bryan around. He brings a smile to my face every time I see him.

Bianca Belair def. Zelina Vega – This was a quick match but had the very best of Bianca on show. I love her so much. She is the very definition of charisma. Zelina slapped her and that was a very bad idea.

Law & Otis – I went into this thinking it was going to be more serious and how stupid am I? Look, this week had a musical number on another wrestling show, so I can’t knock it too much. For the record, I liked the musical number more than this, but this had fun moments. Asuka’s Japanese testimony was a highlight and I enjoyed the sound effects, particularly the ca-ching sound signifying Miz bribed Judge JBL. Let’s remember though, that WWE just did a draft, and now a Raw and SmackDown wrestler will be wrestling each other on Sunday. I suggested previously that doing the draft between pay-per-views was silly, as feuds could have wrapped up at Hell in a Cell without having to do stuff like this. What’s the point of the damn draft then?

SmackDown delivered a really good show for Hell in a Cell. I’m way more excited to see SmackDown matches. Raw is just not compelling. Orton and McIntyre is interesting, but the third match already in the series. The blue brand is the A show.