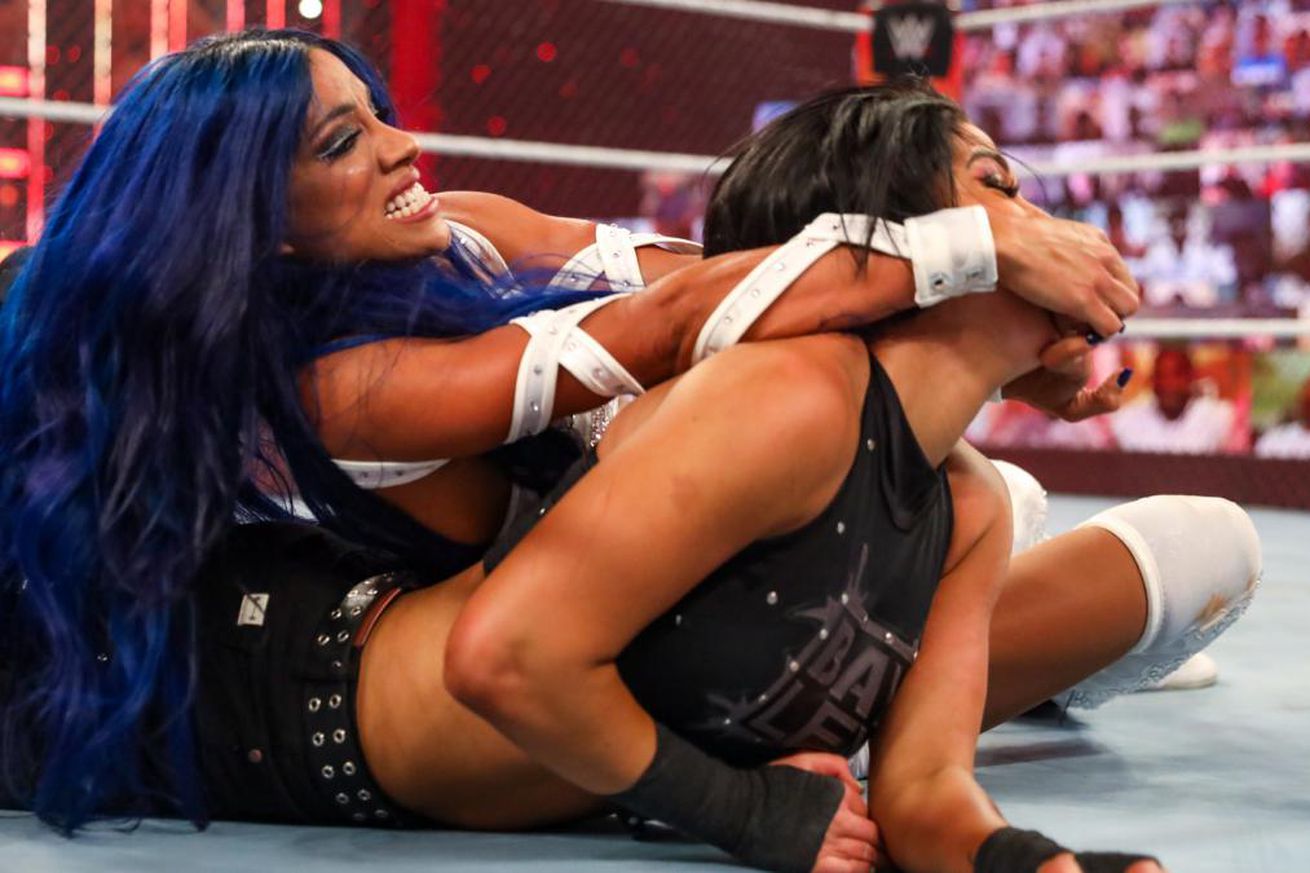 Sasha Banks won the SmackDown women’s title in what was MY main event this evening.

Two really cool spots from Sasha early were the tug of war using a table and Sasha slammed Bayley into the cage a few times. The second was Sasha running up the table to deliver a meteora. Later, she would do another meteora off a ladder propped up by two chairs.

This match was incredible. It had to follow the opening cell match between Roman and Jey, but it was just as good! Bayley and Sasha utilized the cell the best. Bayley used two kendo sticks and catapulted Sasha into them from the floor.

The finish was beautiful. Sasha gave Bayley the Bank statement using the special chair that Bayley brought with her. Before the bell rang, Sasha kicked it out of her hands and it fell just outside the cell right before it lowered. Perfect timing!

Sasha and Bayley went all out for each other, and it showed. They sold the hell out of the viciousness and the violence.

Mandalorian star Sasha Banks deserved this win. To be honest, I almost thought they would have her lose and take some time off until TLC or the Rumble. I have no issues with this. This was 1a for the night, with the next match at 1b.

Wow. While Bayley and Sasha was a wonderful masterpiece of a cell match, this match was a phenomenal storyteller.

Both Reigns and Jey Uso killed it, and the way they ended it actually can continue the feud like I hoped for!

The best part of this for Jey was that he was presented as a legitimate guy that could potentially get an upset victory. Jey choked out Reigns and Reigns came to and said “Tribal chief never quits.” Woof. Reigns then turned it around on Jey and beat the living hell out of him.

Reigns did this really cool drive by spot with the steel steps to Jey’s head. Once again, the referee had to plead with Reigns to give Jey some room to breathe, and he tossed that dude right out of the ring! The officials came out to try and stop him, and even Heyman couldn’t do anything.

Jimmy Uso came out to protect Jey’s lifeless body, and he emotionally pleaded with Reigns to stop, and that whatever he was going through they could all work on it together. All of a sudden, Reigns collapsed and started crying. Y’all, this guy could be a legit award winner for this performance.

Psych! He choked out Jimmy and the brilliant thing about this, Jey came to and said I quit to protect his brother, and not even for himself. Brilliant! And that is how you have a legitimate way to continue this feud. When Reigns left the ring, he looked back at them and said “I love y’all.” What a bastard. Afa and Sika congratulated Reigns on the stage with a lei and he held his title up high. What a beautiful touch that was.

I cannot wait to see what happens next on Friday. Jey is now supposedly going to have to do Reigns’ bidding but I don’t know how we don’t get him calling out Roman for one more match, since he never quit for himself. God this is brilliant.

Climbing to the top

Alright, so this was the main event of the show, but it was just not that good.

This was the third match in the feud between Orton and McIntyre and while both men have been doing well in their respective roles, this match kind of fell flat for me. Yes they went to the top, and yes McIntyre fell through the announce table, but that’s been done a million times already.

To be clear, I have no qualms with Orton being WWE champion. Orton deserves it after the incredible 2020 he’s had so far. I… just wish we didn’t have so many of these matches. As we all already know, Raw has been repetitive as hell and a lot of feuds dragged on before the draft. Sadly, this was also one of them.

No hooray’s from me. Keith Lee, Braun Strowman, Angel Garza, Jeff Hardy, Sheamus, and Kofi are some men who could have had fresh programs with McIntyre leading to the Royal Rumble. But we’re continuing Orton instead. So why couldn’t Orton just win at Clash of Champions, in a match that didn’t have three legends attack him around the arena, and then McIntyre win here at Hell in a Cell to set those up?

The booking for Raw has been mostly garbage for the past few months. But hey at least the entire Rollins/Mysterios feud moved to the other show!

Also, now that Miz is the Money in the Bank holder, I don’t see him cashing in on Orton. So we pretty much already know what is happening when Drew wins the title back. While I hate the Miz and Morrison pairing, at least that’s a fresh feud. I’m desperate for those these days.

Miz def. Otis – Oh, Tucky. Why? Well, you told us why, but it’s just a thing everyone has to ask after one of these moments. I was waiting for most of the match for Morrison to get ejected since he was distracting Otis and dragged Miz out of the ring at one point, but thankfully the ref saw him almost hit Otis with the briefcase. After the ejection, Otis did the worm and Miz grabbed onto the apron. While the ref was trying to fix it, Tucky grabbed the briefcase and hit Otis, giving Miz the win.

The explanation after was decent for a turning on your best friend promo. I am surprised they took this long to do this turn. Also, hey remember when Tucker was drafted to Raw while Otis was drafted to SmackDown? I guess we just found a Survivor Series match for this year.

Elias def. Jeff Hardy via DQ – I’m annoyed by this for the mere fact that it shows that Elias doesn’t watch the show, and doesn’t listen to anyone who tells him that Hardy wasn’t the guy who ran him over. Like… anyone could tell him and try to convince him but they haven’t even had a segment like that. Does no one care about Hardy’s well-being enough to try and get Elias to understand he’s wrong? The best part of this was Jeff taking the guitar away from Elias before he could use it and smashed it over Elias’ back. I like when babyfaces aren’t stupid.

Bobby Lashley def. Slapjack – Yeah that was something I had to type. I cannot stand what they’ve been doing to RETRIBUTION just as business started picking up for them. Two members lost to the same dude with the same move, and then all of them got scared and ran off after ONE GUY stepped to them, TWICE in one week! What the hell? (The Raw recap is coming back to me.) Ali backing down and scampering away like a dog with its tail between its legs was just dumb. Make up your minds, WWE. Are they a threat, or are they cowardly heels? I’ve almost lost all interest and hope in Ali’s future.

Hell in a Cell was a hit this year. It didn’t end with AEW chants and me rage quitting WWE like last year, so that’s a good sign! This felt more like a SmackDown show because all of its matches were compelling and I can’t wait to see the fallout.