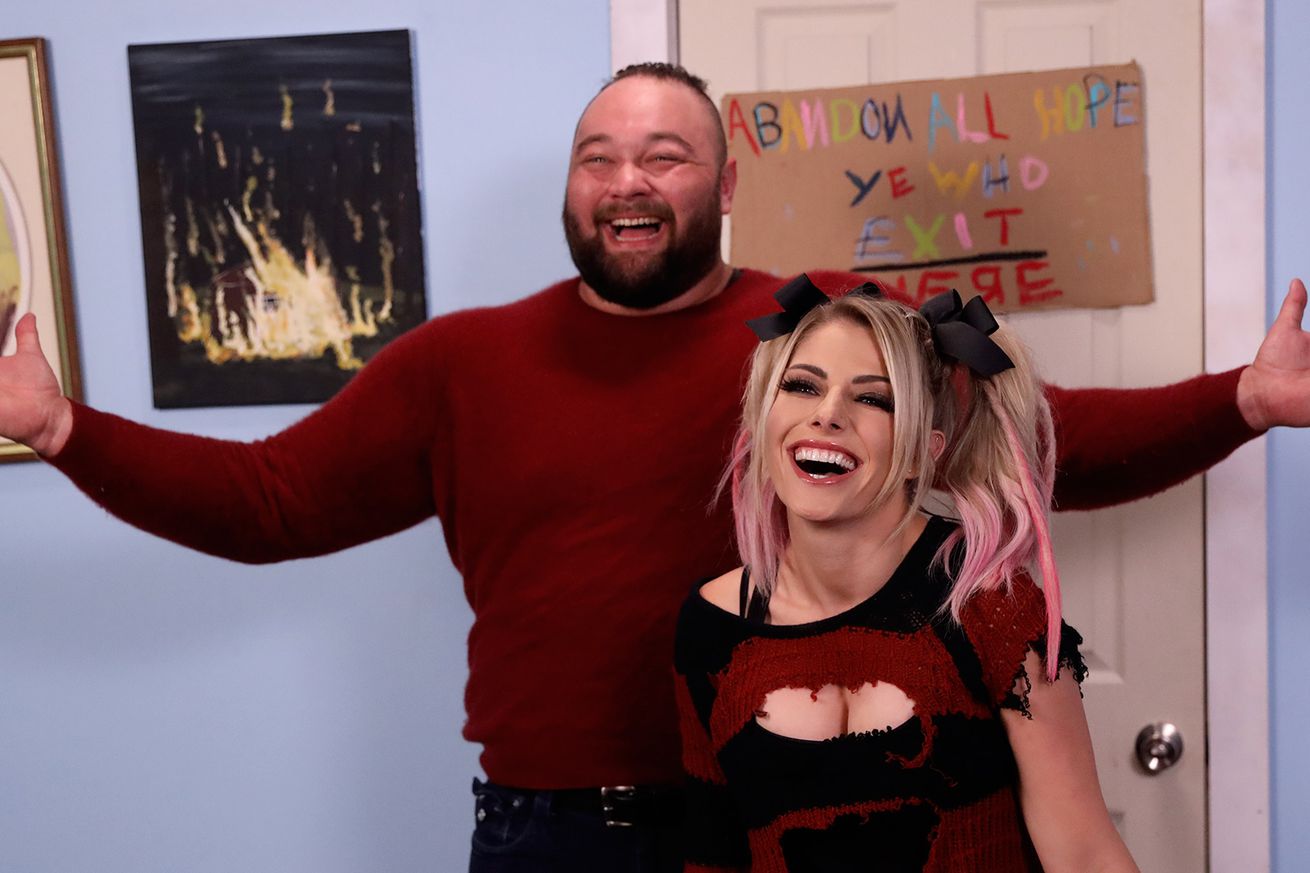 Amazingly, WWE booked an entire horror-themed PPV last night without their horror-themed Superstar. But Bray Wyatt and his new sidekick Alexa Bliss made their presence felt in a big way last Monday, and with one of Bray’s former allies now atop the red brand’s men’s division, it shouldn’t be long before The Fiend is in the title picture.

The third time was the charm for Randy Orton, who knocked Drew McIntyre off the side of the cell and RKO-ed him inside to become WWE champion at Hell in Cell. Contractually obligated rematches may be a thing of the past, but WWE hasn’t completely stopped booking them after title changes. Don’t be shocked if Drew gets a do-over as soon as tonight. But don’t be surprised if someone teleports in to McIntyre/Orton IV to start planting seeds for Randy’s next program.

We could have to wait until after Survivor Series for that feud to start. “The one night a year when Raw and SmackDown go head-to-head” is next on WWE’s event schedule, so a one off match pitting the WWE champ against Universal titleholder Roman Reigns could be coming up in a month.

But Bray’s best stories have involved past friends and foes in need of forgiveness. Take it from my friend Kyle, who was in the seats for a match that had a giant sperm on a ramp & and a ring full of maggots.

They absolutely need to get to Randy vs. the Fiend at one point. The Fiend has consistently targeted perceived injustices against Wyatt and none was bigger than that WrestleMania 33 travesty#HIAC

Orton taking the belt from Wyatt at ‘Mania was one of a couple things The Fiend would want retribution (not RETRIBUTION – we’ll get to them in a second) for – the other being Randy betraying the Family after winning the Royal Rumble and burning down the Wyatt Compound. Sure, he eventually won the House of Horrors match with an assist from Jinder Mahal, but that’s not proper payback.

We’ll see when and how they get there. But after months of Orton vs. McIntyre, shaking up the top of the card with Bray’s brand of madness can’t come soon enough for yours truly.

Lana wasn’t ready for Raw Women’s champ Asuka. So who is? Shayna Baszler, one half of the WWE Women’s Tag Team titleholders, put her hands on the Empress last week while her parter Nia Jax was putting Lana though the announce desk (again). Is that setting up one – or two – future programs?

The New Day duo of Xavier Woods & Kofi Kingston are once again Raw Tag Team champions, and last week Kofi took care of an old rival when he beat Sheamus. Will a new challenger from this show emerge? Or will thing stay in a holding pattern while we wait for a Survivor Series showdown with the blue brand’s champ?

The Hurt Business called out RETRIBUTION last night, and Bobby Lashley even put his United States title on the line against Slapjack. It didn’t go well for our man Slappy, and the post-match attack went badly for Mustafa Ali’s posse, too. Not even sure what else to say about RETRIBUTION at this point, so let’s just move on to some happier news…

After he pinned Drew Gulak and sneaking away from Akira Tozawa & Lucha House Party, we’re now at three weeks and counting on R-Truth’s 42nd run as 24/7 champion. God is good.

– After several months of Otis just being happy to have the Money in the Bank contract, it’s back in the hands of a heel who’s threatening to use it. Is Miz really looking to cash-in on Orton tonight?

– What’s next for the man who turned on Dozer and helped the A-Lister become Miz-ter Money in the Bank again? Tucker’s solo career got a boost, but Otis is looking for revenge… and he doesn’t seem to care about the brand split.

– He lost the match to Braun Strowman, but Keith Lee kept their feud alive with a low blow in the aftermath.

– Elias’ new album drops today, and he started the party early with a DQ win over Jeff Hardy last night.

– A tale of two friendships… AJ Styles loves his new large friend. Peyton Royce is not crazy about her new tag partner.

– Is tonight the night Everything gets All Red?

It’s the Hell In A Cell fallout show!