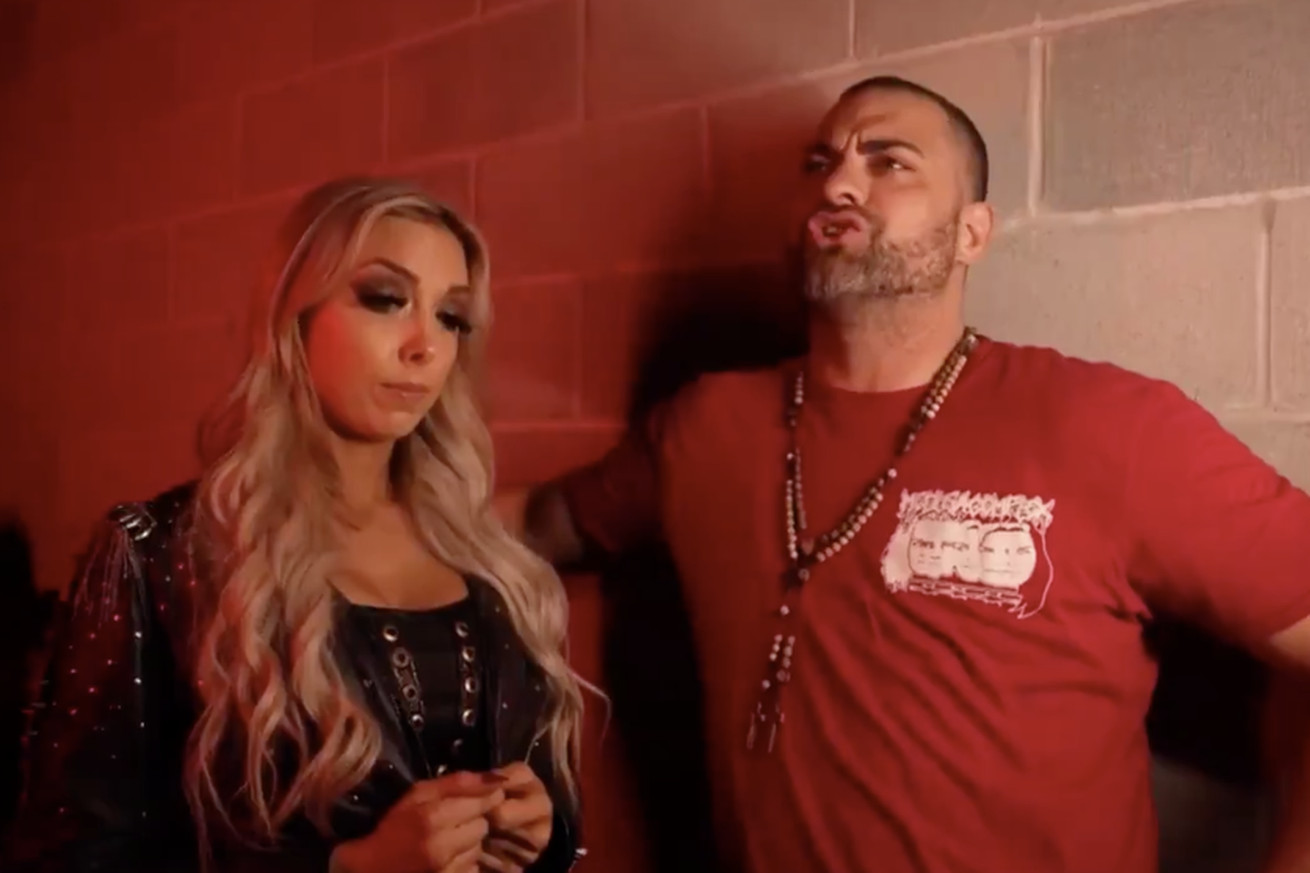 Episode 58 of AEW Dark featured The Bunny exposing her scheme on QT Marshall, Jake Roberts and Lance Archer warning about a warpath, Team Taz playing Darby Allin for a sucker, and finally a winner between Peter Avalon and Brandon Cutler.

This episode had a surprising amount of little tidbits relevant to Dynamite. Let’s hit those before we get to the matches.

Allie clued us in on playing QT Marshall. She did it to infiltrate the Nightmare Family. It was a like a cat playing with a mouse. Allie wasn’t even nice to him, and he still spent a ton of money on her. It was fun while it lasted, but she got bored. QT was just collateral damage. Eddie Kingston said that Blade & Butcher will be coming after the higher ranked Natural Nightmares.

QT Marshall responded that Allie took his money, credit card, car, and even a little bit of his dignity. One thing she won’t take is his spot in the rankings. Dustin Rhodes wasn’t concerned about the oncoming threat. Blade & Butcher won’t want the ass-kicking that is coming their way.

DARK EXCLUSIVE
The message was heard loud and clear.
But, the Natural Nightmares @realmmarshall1 & @dustinrhodes are ready for a fight.
Watch #AEWDark NOW via our Official YouTube Channel ➡️ https://t.co/bMfSMwNBqt pic.twitter.com/LOmovDOjFn

During the match between Brandon Cutler and Peter Avalon, the Young Bucks made their first step toward babyface rehabilitation. They came out near the end to cheer for Cutler.

In another story, Alex Marvez attempted to interview Scorpio Sky. They entered his locker room to find it disheveled and the word ‘Thief’ written on the mirror. This was clearly done by Shawn Spears.

Jake Roberts and Lance Archer had a message for the world. Roberts said that we will be seeing a few changes in AEW. It’s been awhile since he hit a DDT, and he’s got that feeling coming. Archer gave credit to Jon Moxley for surviving their title fight, but Moxley didn’t beat him. Archer will never stop coming for the world championship. He will be on a biblical warpath from the old testament.

After the main event of the evening, Ricky Starks suckered Darby Allin into an ambush from Brian Cage. Will Hobbs made the save with a chair.

Here’s the Dark lineup with ratings (watch, solid, okay, pass) on which matches are worth your time toward Dynamite:

Cutler vs Avalon was the most action-packed. If you are interested in that feud, the blow-off definitely delivers. The best bout of the evening was Shida vs Hirsch. TH2 vs SCU lived up to the high quality you would expect. On the enhancement side, Top Flight showed some flash as newcomers. As for the rest, the stars shined as designed.

Excalibur teamed with Taz to call the action. The third man was a revolving door with Anthony Ogogo, Miro, Brandi Rhodes, and Ricky Starks. Justin Roberts was the ring announcer.

Ricky Starks defeated VSK. Starks rebounded from a backbreaker for a spear and Rochambeau to win.

Hikaru Shida defeated Leyla Hirsch. Hirsch entered by flipping the bird to the other wrestlers in the crowd.

Hirsch’s style was amateur wrestling. The Russian grappler shot a firm double leg takedown and controlled Shida’s neck. Hirsch executed a sweet suplex by pulling Shida off the mat and into the air before sending her crashing down.

[email protected] is all over the champ! #AEWDark

Hirsch also had an impressive counter of the Falcon Arrow into an armbreaker. Shida reversed it into a stretch muffler, but Hirsch countered back into a type of crucifix position using her legs. Shida got to the rope for a break. In the end, Shida blocked a knee strike then unloaded with a running high knee of her own.

Time and time again, @shidahikaru shows that she has the heart of a champion! #AEWDark

Another running knee to the head and a Falcon Arrow slam gave the champ victory.

Jurassic Express defeated Jersey Muscle & Danny Limelight. Luchasaurus had a dominating hot tag moment to clean house. The bad guys gained momentum against Marko Stunt, then Jungle Boy stormed in to take control. The closing move saw Jungle Boy and Luchasaurus toss Stunt into the air to connect on a Canadian Destroyer to Limelight for victory.

SCU defeated The Hybrid 2. Frankie Kazarian and Christopher Daniels represented SCU. The unique styles of both teams made for an exciting clash. In the end, Kaz rolled up Jack Evans for the win when Daniels pulled Angelico out of the ring to prevent a teamwork maneuver. After the match, TH2 attacked. Angelico clipped Kaz’s knee, TH2 hit a teamwork flying stomp slam, then Angelico applied a shoulder lock to Daniels.

Brandon Cutler defeated Peter Avalon. No count-out, no DQ, there must be a winner. Cutler attacked first by leaping over the ropes to smash Avalon before the bell. Both men made use of the no DQ rule. Cutler put a garbage can over Avalon then crushed him with a flying elbow drop off the apron down to the floor.

As a wise wallaby once said… Garbage day is a very dangerous day. @BranCutler #AEWDark

Avalon used a back body drop to send Cutler through a table. The first close pinfall came after a reverse DDT from Cutler. Leva Bates added to the drama by slapping Avalon when he took her book. Cutler tried to sneak a roll-up, but Avalon clobbered him in the face with the huge book. Avalon opened it up to reveal a hidden pair of brass knuckles. He charged forth, but Cutler picked him up for a slam onto a pile of little dice.

Cutler had Avalon in his arms on the apron. Avalon punched him with the brass knucks. That caused both men to fall off the apron through a table.

It was at that point when the Young Bucks came out to show support for Cutler. Cutler tried for a super DVD, but Avalon countered into a super hurricanrana. Upon impact, Cutler rolled it over into a pin for the surprising win. Cutler is no longer winless in AEW.

Best Friends defeated Anthony Bowens & Max Caster. Caster bust a rhyme prior to the bout. Best Friends had a run for their money and pulled out the win on Strong Zero.

10 defeated Sean Maluta. 5 hit Maluta with a shotgun dropkick on the floor, but it wasn’t really needed. 10 had his way and won with a spinebuster then a clothesline to the back of the head. Afterward, 5 and 10 combined for a dropkick slam to Maluta.

Ivelisse & Diamante defeated KiLynn King & Savannah Evans. The sicarias were too fierce for their larger opponents. They closed it out with a superkick by Ivelisse then a Code Red by Diamante. Both were on King, who took the pin.

Sonny Kiss defeated Aaron Solow. Solow used his savvy to stifle the speed of Kiss. Kiss took advantage when Solow was preoccupied arguing with the referee. Kiss put Solow away with a flying split leg drop.

Will Hobbs defeated Nick Comoroto. Hobbs powered through Comoroto early. Comoroto went for a knee to take control, but Hobbs caught a corner charge for a spinebuster. Hobbs flew high in a frog splash to win.

Darby Allin defeated Alex Chamberlain. Allin took a licking and kept on ticking. A guillotine choke in the ropes ignited his comeback. Allin hit a Coffin Drop to Chamberlain, who was still draped through the ropes. An over-the-top stunner then a regular Coffin Drop sealed the deal.

Three cheers for AEW giving us some kind of explanation for Allie turning back into The Bunny. That story certainly wasn’t executed to perfection, but at least we were given some closure. The little details will be important going forward. I want to see how Allie’s reconnaissance into the Nightmare Family will pay dividends.

The Young Bucks are back on the right path. It might be too little too late to set them up as likeable babyfaces against FTR at Full Gear on November 7, but at least they are trying to give us someone to root for. It also hurts that this stuff isn’t occurring on Dynamite. I’m expecting some sort of reconciliation for their rude superkick parties.

The blow-off for Peter Avalon and Brandon Cutler was a great fit for their feud. It hit all the little notes of their personalities. Being slammed on dice looks uncomfortable as heck. I don’t expect that win to kick-start any momentum for Cutler, but perhaps he can make amends with Avalon and form a tag team again. They were pretty entertaining in the ring as a duo.

Hikaru Shida versus Leyla Hirsch was my favorite of the bunch. I enjoyed Hirsch’s hard-nosed style. AEW should definitely keep tabs on her development. Shida was as great as always. She might be the most babyface wrestler on the roster right now.

Share your thoughts on Dark. Who stood out most for episode 58?