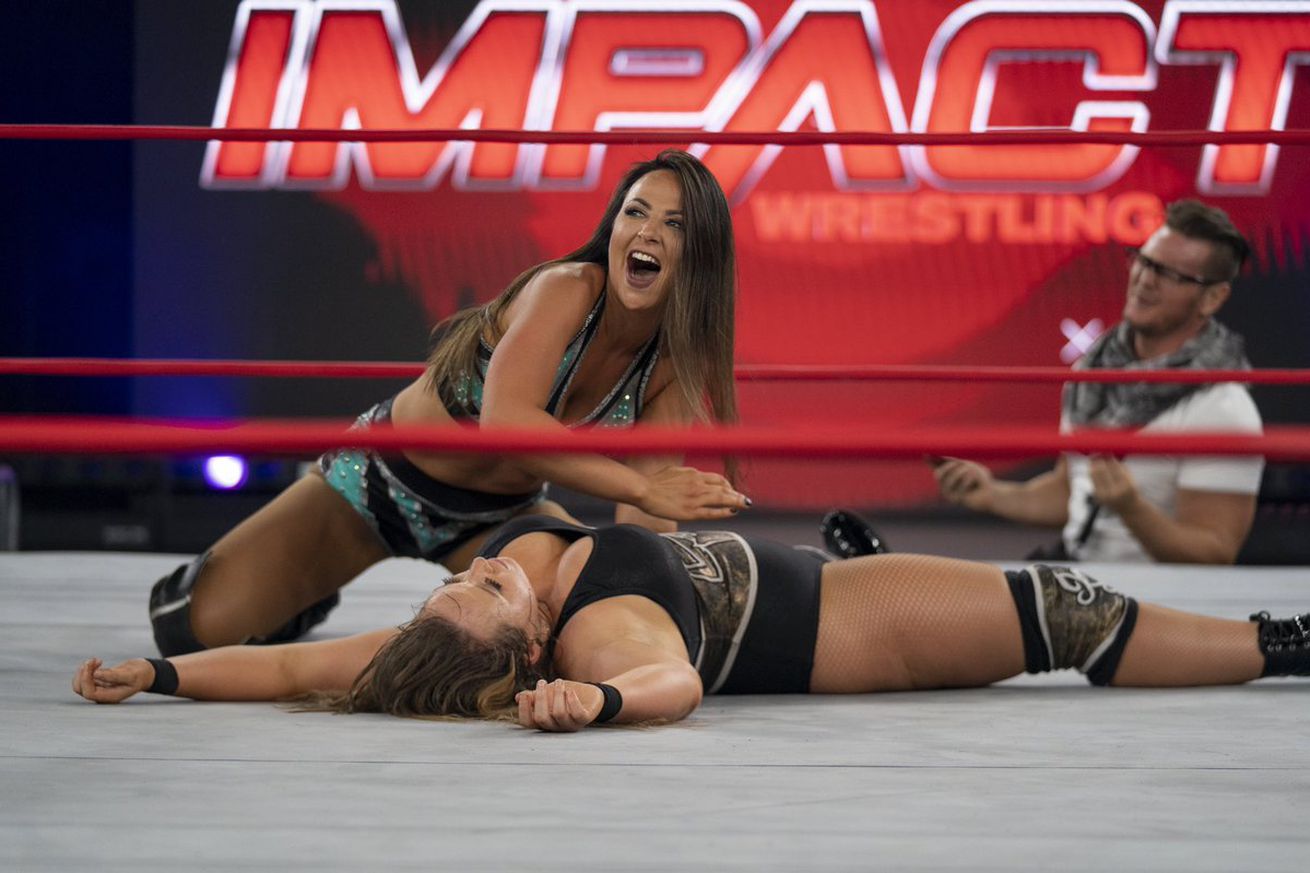 Tenille Dashwood is back in a big way. She took down Jordynne Grace in the main event of the evening. Dashwood did have assistance from her photographer, Kaleb Konley.

Grace was no slouch as a powerhouse. She delivered a series of back and forth clubbing clothesline to set up Dashwood for a Michinoku Driver.

Dashwood came back with a flying stomp to a hung-up Grace then a running low crossbody into the corner. Grace persevered with a heavy spinebuster.

In the end, Grace had control after a hefty ham fist. Konley hopped on the apron, and Grace lost all composure to go yell at him. Dashwood took advantage by striking with a running single-leg dropkick to win.

It’s still all about Tenille. @TenilleDashwood was victorious in her return to IMPACT against @JordynneGrace. #IMPACTonAXSTV pic.twitter.com/CR6nrCvleP

Solid bout. Dashwood performed nicely in her return. She had no rust whatsoever. Since Grace was bamboozled by Konley, I’d expect this feud to continue all the way to the Bound for Glory PPV on October 24.

For all those lovers of women’s wrestling, Impact should be on your weekly checklist. This main event was set up by a few weeks of short vignettes. It wasn’t a heated feud or anything, and yet it earned the main event slot. Impact consistently has more than one Knockouts fight and also has storylines for everyone in the division.

Side note: I guess the case of the man behind the Suicide mask has been unofficially cracked. Kaleb Konley played him in the past. Now that he is on-screen as himself, I would venture to say he has been signed all this time as Suicide.

Let’s roll through the episode from beginning to end.

X-Division #1 contender: Trey Miguel defeated Chris Bey and TJP in a three-way. Current champ Rohit Raju was ringside to observe and taunt. The winner would go on for an immediate title match. This was an athletic affair with marvelous maneuvers aplenty. The craziest moment was when Trey launched for a diving attack to TJP, but the target moved and Trey flew into a surprise cutter from Bey. For the finish, Trey’s high flying paid off. TJP secured a grapevine ankle lock to Bey. Trey leaped for a flying double knees to connect on an unsuspecting TJP for the 1, 2, 3.

X-Division Championship: Rohit Raju retained against Trey Miguel. The match lasted maybe ten seconds. Trey charged. Rohit evaded and used momentum into the ropes for a roll-up victory. The champ did grab the tights though.

Eric Young had seven days to think about what Rich Swann said. From here on out, everything that happens is the fault of Swann and Scott D’Amore. Young tried to give them a way out, but Swann chose the hard path.

Kaleb Konley informed us that Tenille Dashwood is ready for her match against Jordynne Grace. Dashwood awoke from here bee venom beauty treatment.

Susie defeated Kimber Lee. Kylie Rae and Deonna Purrazzo were ringside to support their respective pals. Susie played a more comedic role, while Lee was keen to produce pain. In the end, Lee was in control. She climbed the turnbuckles, but Susie awoke for a powerful strike. Purrazzo grabbed Susie’s foot as a distraction, however, that ended up backfiring when Purrazzo accidentally clobbered Lee. Susie grabbed Lee for a spinning Panic Switch driver to win.

After the match, Purrazzo attacked Susie and Kylie. She locked Susie in an armbar. Kylie made the save with a kick to the mush. Kylie took the mic to announce her intentions of using her #1 contender status to challenge for the Knockouts Championship at the Bound for Glory PPV on October 24.

#Heath4Impact. Heath was back with another commercial. He brought in the A-list of David Hasselhoff, Flavor Flav, Nancy Kerrigan, and Chuck Norris with messages to help get that hashtag trending so Heath can get a job with Impact. Watch the masterpiece here.

The Good Brothers approached the Motor City Machine Guns backstage looking for a thank you brewski. The Rascalz got in the Good Brothers’ faces shouting loudly about not being young boys. It is time to earn respect, and a match was agreed upon for next week.

EC3 knows what it feels like to have the TNA belt stolen. Angry, scared, violated. Fear not. These are times to come together, unite, and control the narrative. EC3 gave out Moose’s phone number (407-457-8494), so everyone can help him gather information to rescue the TNA belt.

Taya wanted to know where Rosemary was last week. Rosemary informed Taya that she had been knocked unconscious. They need to be on the same page for the wedding, so Rosemary proposed to help Taya first with Kiera Hogan and Tasha Steelz then they could both focus on getting Havok. In an act of unselfishness, Taya decided to help with Rosemary’s problem first then handle Hogan and Steelz later.

John E. Bravo was becoming his own man as wedding planner. He had a lineup of groomsmen including the Deaners, Alisha Edwards, Crazzy Steve, Johnny Swinger, and Fallah Bahh. Bravo began issuing orders, but they all wanted to talk about the bachelor party. Swinger and Bahh had an argument about who is manlier. Tommy Dreamer overheard and shouted, “Match time!” but Bravo shooed him away.

Most unprofessional wrestler. Brian Myers flipped out by flipping a table backstage when the interviewer pointed out his loss to Willie Mack and wins by cheating. Dreamer walked in to calm Myers down. Impact is a place for a new start. Dreamer ordered Myers to clean up the mess. Myers refused, and the two exchanged heated words in their wrestling-dad/son relationship. Myers acquiesced but stated that Dreamer better walk the other way from now on when they see each other backstage.

Eddie Edwards returns. Cody Deaner was scheduled for a match with Cousin Jake by his side. Eric Young assaulted them by surprise. EY was out to send a message to the world. He crushed both Deaners with a piledriver. Young’s conscious is clear. This violence is on Swann and D’Amore. Young also beat up security goons trying to save the Deaners. Eventually, D’Amore came out to yell at Young. EY grabbed the boss man. That’s when Edwards hit the ring for the save.

[email protected] is BACK! #IMPACTonAXSTV pic.twitter.com/l3y8Q6g4vz

Backstage, Edwards loudly pestered D’Amore for his title rematch against Young. D’Amore gave it to him for Victory Road on October 3, exclusively on the Impact Plus app.

RVD defeated Sami Callihan. The caveat was that Katie Forbes gets five minutes in the ring with Sami if RVD wins. Forbes helped her man with timely distractions and interference. She even spritzed hair spray into Callihan’s eyes, so RVD could win via leg scissors roll-up.

Katie got her wish and stomped Callihan. RVD set up a chair on top of Sami. After a smooch session between lovers, Callihan got up to throw the chair at RVD. That gave him an open shot to piledrive Forbes into oblivion.

Ace Austin & Madman Fulton believed they should get a tag title shot for pinning the champs in last week’s 8-man. The North disputed that notion, since they did the work before Ace stole the pin. A match was made for next week to prove which duo is better.

Eddie Edwards was mysteriously attacked as he was exiting the building.

Who just attacked @TheEddieEdwards as IMPACT went off the air?! #IMPACTonAXSTV pic.twitter.com/5zn3lvvca3

The opener with Trey, TJP, and Bey was the top bout of the evening. It provided two of my favorite moments for the show. TJP’s combo Sharpshooter and Camel Clutch was funny. Bey’s facial reaction cracks me up.

The surprise cutter from Trey made me pop in surprise.

As entertaining as the bout was, I do have to question the purpose after Rohit Raju won so simply. That made the three-way feel like a waste of time in hindsight. As far as I’m concerned, all three challengers are now knocked back to the end of the line to start over. Sure, Rohit won by grabbing the tights, but it wasn’t anything egregious enough for Trey to deserve an immediate rematch.

On commentary, Josh Mathews made it sound like Callihan’s feud with RVD is over. That left me scratching my head. So, the big payoff was to pummel Forbes even though Sami lost to RVD?

Eddie Edwards’ return gave me the same feelings as Rich Swann’s return. Both were cool moments but felt a little awkward in execution. Both took their sweet time to show up and both are still injured. The closing scene was curiously vague. Why would the camera black out like that? Is it supposed to set up a surprise for Edwards’ PPV feud? That would mean he loses to Eric Young at Victory Road. I’m expecting that to be the case, but I figured it would happen in such a way that Edwards gets inserted into the Bound for Glory main event in a three-way with Young and Swann.

On some character beats, I’m not liking the Motor City Machine Guns entitled attitude toward the Good Brothers. I don’t see why MCMG should have beef with Karl Anderson and Luke Gallows yet. I’m wondering if power is going to John E. Bravo’s head as wedding planner man. The question will be if Rosemary likes this new side to Taya’s doormat. Tommy Dreamer’s interaction with Brian Myers fell flat for me, because it came seconds after he was a comedy man in the Bravo segment.

This episode did a great job of creating anticipation for next week. The North vs Ace Austin & Madman Fulton, Rascalz vs Good Brothers, Taya & Rosemary vs Havok & Nevaeh, and Johnny Swinger vs Fallah Bahh all had stories to set the table.

I’ll leave you with Simpsons artwork of Katie Forbes.

Share your thoughts on Impact Wrestling. Who stole the show? Who do you think attacked Eddie Edwards?

Report: WWE plans to take over Twitch accounts and revenue from its wrestlers