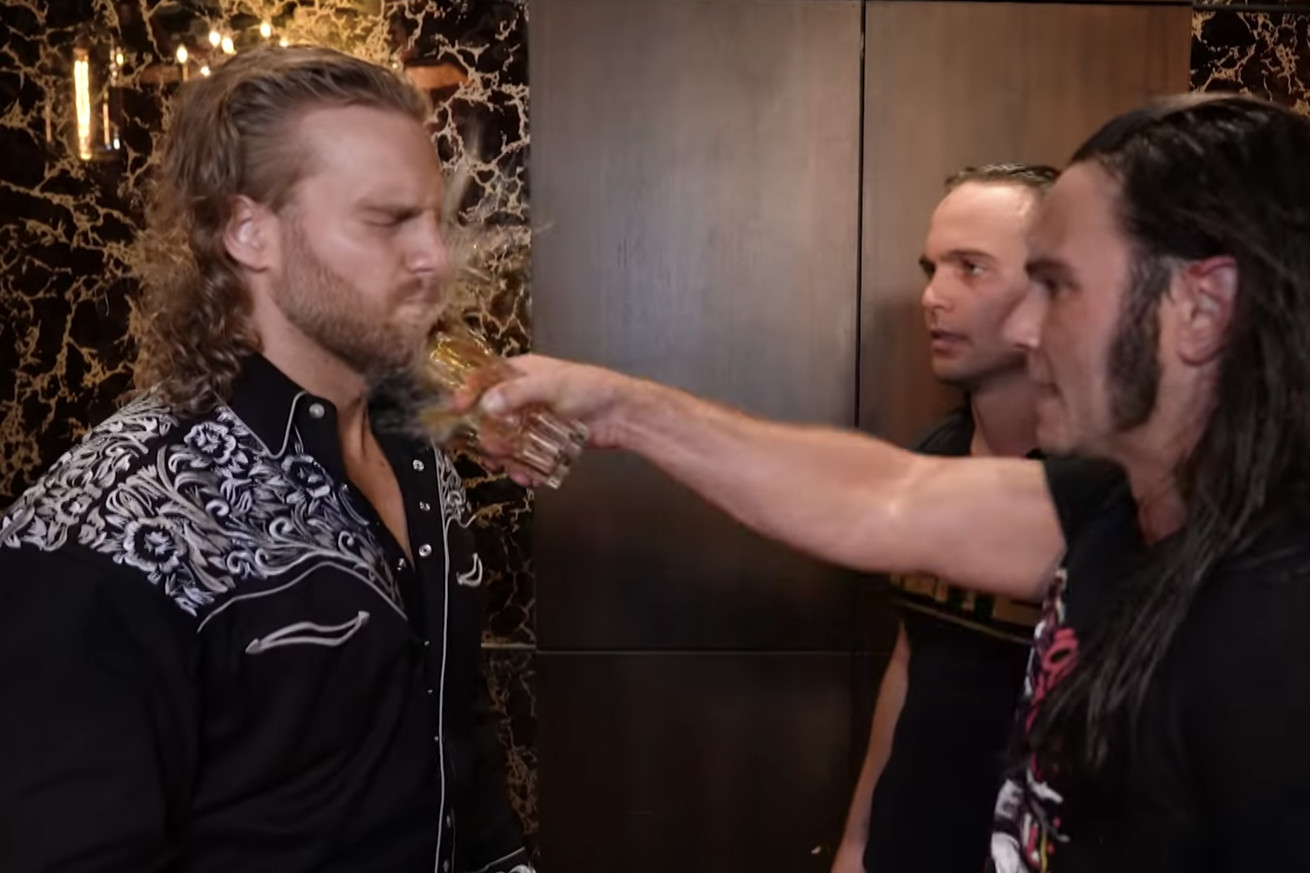 Dynamite (and BTE)’s story of betrayal and separation isn’t playing out like a typical heel turn. It’s actually relatable.

I have thought too much about Kenny Omega and The Young Bucks turning heel, and now that it’s kind of happening, I’m still impressed and confused by how they’re going about it.

What’s interesting about each of these narratives is how there’s a bit of confusion about motivation. While Omega and Hangman Page have had sit-down interviews, it feels as if there are story beats that are still incoming.

The other angle about this whole aspect that feels interesting is that these characters have seemingly betrayed each other without actually attacking one another. The closest thing we’ve had is a glass of brown liquor thrown in Page’s face, which is closer most of us have come to than getting a double superkick to the face.

So let’s break down the current chronology, by its active participants:

Let’s start with the brothers who prefer to block on Twitter. As I’ve written before, The Bucks had been getting a bit too full of themselves, the second FTR (F**k This Rebranding?) showed up. Then, on BTE and Dynamite, they got increasingly angry and snippy at Hangman Page, who was just being honest about wanting to leave.

Then, we have the honest moment where the Bucks’ pivot towards their current roles began, and it was very “oh the heels have a point.” On Aug. 27, on Dynamite, Page grabbed a hold of one of the Bucks’ legs, as they were setting up for the Meltzer Driver, which led to the Bucks getting eliminated from the #1 contender gauntlet match.

And how did they react? On the Sept. 2 Dynamite, they were cold to tag partners Jurassic Express, and at All Out, well, they just beat the pulp out of Jurassic Express to send a message that they were not your white meat babyfaces. To not directly screw over Omega and Page (who didn’t need their help to lose to FTR) … at All Out, was interesting. They were brooding? We’d expect their revenge to come that way.

On subsequent Dynamites, the Bucks super kicked Alex Marvez (Sept. 9) for knocking on their door twice (arguably a face move on their part) and then randomly superkicked ref Mike Posey and then threw money at Tony Khan (Sept. 16) to pay their kayfabe fine.

For The Bucks to be targeting everybody but Page just seems weird. I assume we’ll learn why but I’m wondering about why it’s happening like this. For The Bucks to become the childish babies that everyone they block on Twitter claims they are, and become detached and unproductive, is weird. When are they going to actually go after the tag titles or Page?

Or do they not trust Page’s now-former tag partner?

Kenny Omega’s inflated sense of self

Throughout all of this, Kenny has come off the most narcissistic and also the most logical, if you can excuse his blaming Page for their loss. Yes, Hangman got pinned, and he kept getting knocked off the apron, but Page showed the fighting spirit and it was Kenny’s misplaced V-Trigger that got Page ready to take the 3-second tan.

Then the temper tantrum, with demands for “a clean start” following Omega and Page losing the tag team championships at All Out was the first real sign that the Kenny Omega heel turn I’d asked for was coming.

Clearly, blaming Page in his head, Omega almost hits the cowboy with a piece of a folding table, before leaving. Ever since, Omega’s been the “I’m moving on” half of a relationship, and taking time out of his schedule to belittle Page on commentary on the Sept. 16 Dynamite. Omega is moving on to the singles picture, and doesn’t want to trust Page anymore (after that thing with The Bucks’ match, who can blame him?).

And then we have the — and I mean this with all due respect — the fuckup. The most relatable person in all of this, Adam Page. I don’t know if I personally understand the mind games that FTR supposedly played on Page to get him to betray the Bucks, but I’m willing to leave that in the past.

Throughout this whole process, the Anxious Millennial Cowboy was nearly entirely perfectly up front with his now former stable-mates about not wanting to be in The Elite. Why Page did what he did to cost the Bucks their chance at competing? Is it really an inferiority complex?

Page’s sadness has always been on display, but his post-match beer on the previous Dynamite, standing alone in the ring, all alone with Omega not wanting to celebrate his win, the emotions have resonated and felt natural — even when this is empty arena pro wrestling.

It seems like the natural progression will see Page and Omega go for success as singles wrestlers, and the Jackson brothers will take Kenny’s side — and probably get revenge, screwing Page out of a title shot.

What I’m curious about is if there will be a moment where things “explode” as traditional heel turns, such as Shawn Spears chairing Cody into the mat. What will the next big emotional story beat be for these four?

Maybe we get it on Dynamite this week. Maybe we don’t. Either way, I’m watching.