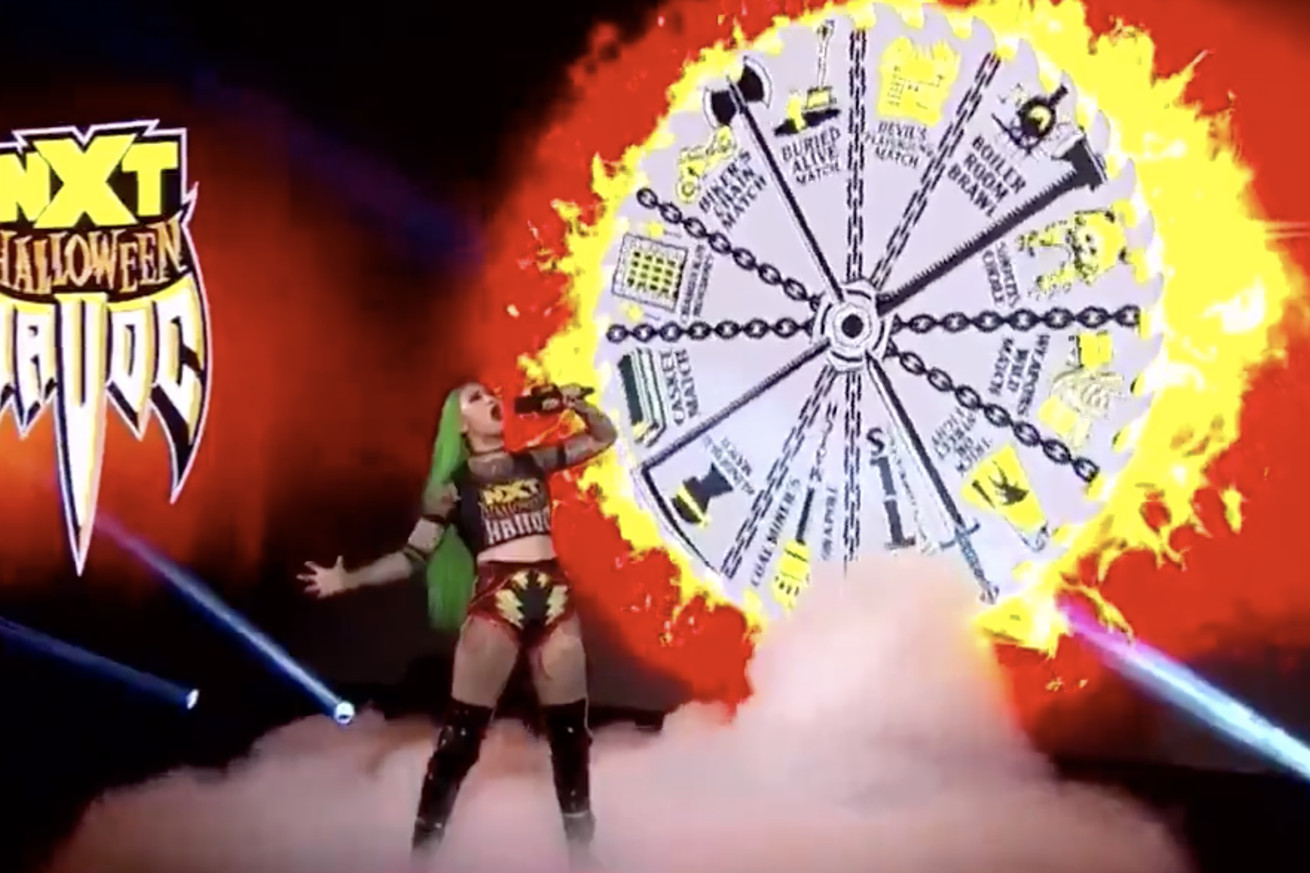 NXT returned last night (Oct. 14) from the Capitol Wrestling Center in Orlando, Florida. You can find the results at the live blog here.

The main event of this week’s show was Damian Priest defending his title against Dexter Lumis.

It felt too soon to run this as a legit feud. So it was none-too-surprising when Cameron Grimes cost the silent superstar the match with a Cave In behind the ref’s back. This is the obvious feud based on the last couple of weeks.

It’ll be interesting to see who gets the better of it. Conventional thinking would say it’s Lumis, who’s the babyface in this program and the bigger man. He’d have a tougher time recovering from the loss than Grimes, who can make up some BS excuse and be good to go. The goal is to elevate both men and hopefully they’re able to do that.

This week’s title match was fun enough to warrant the main event spot. Lumis’ bursts of agility are still a sight to behold and plays into his enigmatic character very well. Meanwhile, Priest is doing what he needs to as a midcard champion. I’ve enjoyed him much more since he turned babyface after his lost to Finn Bálor. He’s not at a point where I’d be very excited to see him in a main title match, but at this point, that may be just preference. I dig Priest, but I’m not a mega fan.

Next, Damian will have to face Johnny Gargano again at Halloween Havoc after just defeating him at TakeOver 31. An attack to the champ with a chair post-match earned Johnny that right. (As did the fact they had to put a match together in short order.)

William Regal added the spice when he kicked it over to Shotzi, who made the match (and Candice’s title match which we’ll get to in a moment) a Spin the Wheel, Make a Deal match.

This will at least add a fun stipulation to the rematch. There’s some ridiculous stuff on that wheel, such as a casket match, a cole miner’s glove on a pole match, and a buried alive match. The outcome will be the same, but it’s always appreciated when they go retro with the classics. And they should have some fun with these stipulations.

Candice LeRae gets another shot at Io Shirai’s title at Halloween Havoc in two weeks.

She got there by defeating Shotzi Blackheart in what was a good match between two women who have consistently having good matches. The deciding factor was Indi Hartwell, who last week started sucking up to Candice (and Johnny Gargano) by giving them a new TV. Indi slipped LeRae brass knuckles, a weapon the Poison Pixie used to win the match.

So we get another rematch from TakeOver 31 less than a month later. It’s feels a tad lazy to run the same match again. They obviously want to wait on bigger challengers like Rhea Ripley, Toni Storm, and Ember Moon. And they should.

At least Candice and Io have great chemistry and the match will be good. The new wrinkle will be Hartwell, who could be a deciding factor for LeRae. But in reality, she isn’t beating Io Shirai and the lack of drama for what is likely the top title match for the show is a bit disappointing.

The wheel will help spice things up though.

Kyle O’Reilly joined Bobby Fish & Roderick Strong ringside for their #1 contenders match against Oney Lorcan & Danny Burch. O’Reilly spoke for the group (kind of like the leader?), showing no simpy for Ridge Holland. In fact, he claimed if Ridge weren’t in a hospital bed because of last week’s gruesome injury, he’d be there because Undisputed put him there.

KOR acknowledged that someone was behind the Adam Cole attack, meaning this “who dunnit?” angle will continue. I’m glad it will. It’s obviously a major shame that Ridge suffered such an injury. But it looks like they can continue this major angle with Undisputed.

Fish & Strong defeated Burch & Lorcan in a fun match to set up a match against Breezango next week. And that should be a fun time. But the big angle here is the future of Undisputed, which despite all their insistences, could be headed towards a break.

The team of Drake Maverick & Killian Dain is just a tad more cohesive than they were last week.

Killian isn’t into the music (which is weird because it rules) and definitely wasn’t into Drake’s team name of Furry & Fury (that I understand). But he is tolerating this entire thing more. Because he gets to beat people up.

Drake booked them a match against former tag champions Imperium. This time around, Dain was willing to tag in, even extending his hand. That’s huge for this relationship! But it wasn’t enough to win.

I’m glad Marcel Barthel & Fabian Aichner went over. This new odd couple tag team is wildly entertaining, but they are not at a place they should be defeating a team the caliber of Imperium. They showed some fight, but it wasn’t enough.

The biggest step forward was after the match. Ever-Rise thought Drake was left alone and tried to get some revenge for last week. But Big Dain sent both men to the floor with a double clothesline. He then told Drake that he is the only person who gets to hit Maverick.

This week, it was at the hands of Johnny Gargano. It wasn’t any squash. It was a two segment match that could have gone the young man’s way at times. But in the end, it was another L for Theory. Wade Barrett pointed out his losing streak and qualified it with the fact it was against a list of really good talent.

But at the same time, a loss is a loss. And it’s not like Johnny Gargano wins all the time. This was kind of a battle of two guys who lose more than they win. In the end, Johnny was too seasoned for the rookie Theory.

This losing streak is an obvious storyline. And NXT has done well with that in the past. Andrade (“Cien” Almas) lost all the time prior to working with Zelina Vega, a move that took him right to the top. Eventually, Theory will find something that works for him when they want to move him on from just putting others over.

– Jake Atlas defeated Ashante “Thee” Adonis. He took advantage when Raul Mendoza and Joaquin Wilde walked out, looking for some revenge on Adonis from TakeOver 31. After using that to his advantage, Jake opted to help Adonis. Santos Escobar joined his boys and Isaiah “Swerve” Scott did the same for Adonis and Atlas, leaving this a stalemate. I wonder if this will lead to Atlas challenging for the Cruiserweight title because Scott lost his last two chances.

– Rhea Ripley and Raquel González had words when the Nightmare overheard Raquel talking some trash in an interview. It took a slew of officials to hold them apart. NXT did a very good job building this as a big time match in a short period of time, especially given González really hasn’t been a featured singles act prior to this.

– Toni Storm picked up her first win back (obvs) against Aliyah. It’s great having this rockstar back on Wednesdays.

This was a solid episode. Some of these matches feel longer than usual. That is good for matches like Shotzi vs. Candice. Not as necessary for Theory vs. Gargano. Running TakeOver rematches and lacking the men’s title scene makes these shows feel less essential, but they’re still not bad.