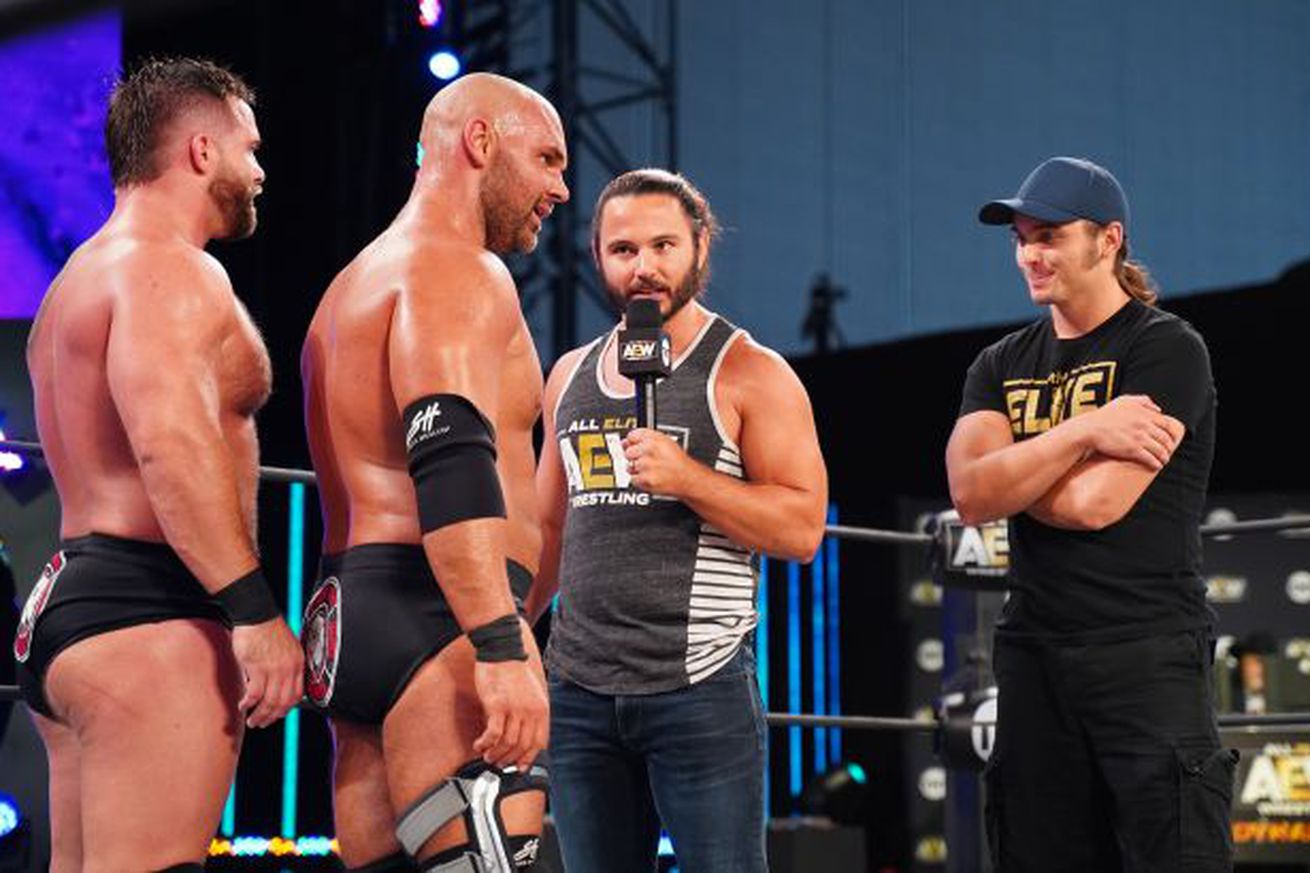 All Elite Wrestling comes our way live from Jacksonville, Florida. Last week, The Best Friends were foiled by FTR and blindsided by Miro & Sabian, MJF all but begged to be in the Inner Circle, Britt Baker waxed Tony Schiavone’s chest, Cody is blonde again, they announced a four-team tag number one contenders match with a raffle drum, Hikaru Shida defeated Big Swole, and Jon Moxley retained the AEW Championship.

Tonight there will be a #1 contender four-way tag team match for the Tag Team Championships featuring The Young Bucks, Private Party, The Butcher & The Blade, and some Dark Order goons. I mean…The Young Bucks are taking this. No contest.

I’ve said it before, and I’ll say it again: all roads lead to FTR versus The Young Bucks.

FTR and The Bucks have been dancing around each other for months. Now that FTR has the belts and The Bucks are baddies, it’s finally time for their much-anticipated clash.

It’ll be superkicks versus shenanigans, with no real baby face to cheer for, but at least we don’t have to pretend this isn’t the end game anymore.

The AEW Championship challenger tournament begins tonight. The first round matches featured are:

In a similar vein to all roads leading to The Young Bucks versus FTR, all roads lead to Hangman Page versus Kenny Omega in this tournament. But hey, at least they threw Colt Cabana a bone!

Unfortunately, it is unlikely that the champion will be able to focus on the results of these four matches because he’ll be dealing with his “friend” Eddie Kingston. Still sore about not properly losing to the champion, Kingston is out for blood and gold.

What’s going on with The AEW Women’s Championship, you ask? Your guess is as good as mine.

Last week, Hikaru Shida defeated Big Swole. It was a good match, but with no title change, we’re back to square one with Shida as the champion and no challenger on the horizon.

Nyla has been hovering on the edge of the title scene for a while and certainly had some feelings after last week’s match, but we haven’t seen much of her or her manager outside of Dark. Nyla could be a solid competitor for Shida even though it’s unlikely that they will crown her as champion for a second time so soon.

Then, of course, there is Britt Baker, one of the only women in the division that has seemed to figure out the formula to break through the writer’s block and get some decent screen time. Perhaps it’s time for the good doctor to face the champion and honestly, hopefully, become champion. Maybe she can bridge the game between gold and screen time in the way the other champions have failed. I’m sure if she threatened to wax all the writers, they would capitulate.

The TNT Championship will be defended next week against Orange Cassidy. Tonight, expect a promo or a video package to hype the match and maybe a few choice thumbs-ups from OC himself.

Unrelated: do y’all think Cody will have new hair tonight? I’m hoping he dies flames down the side like a racecar.