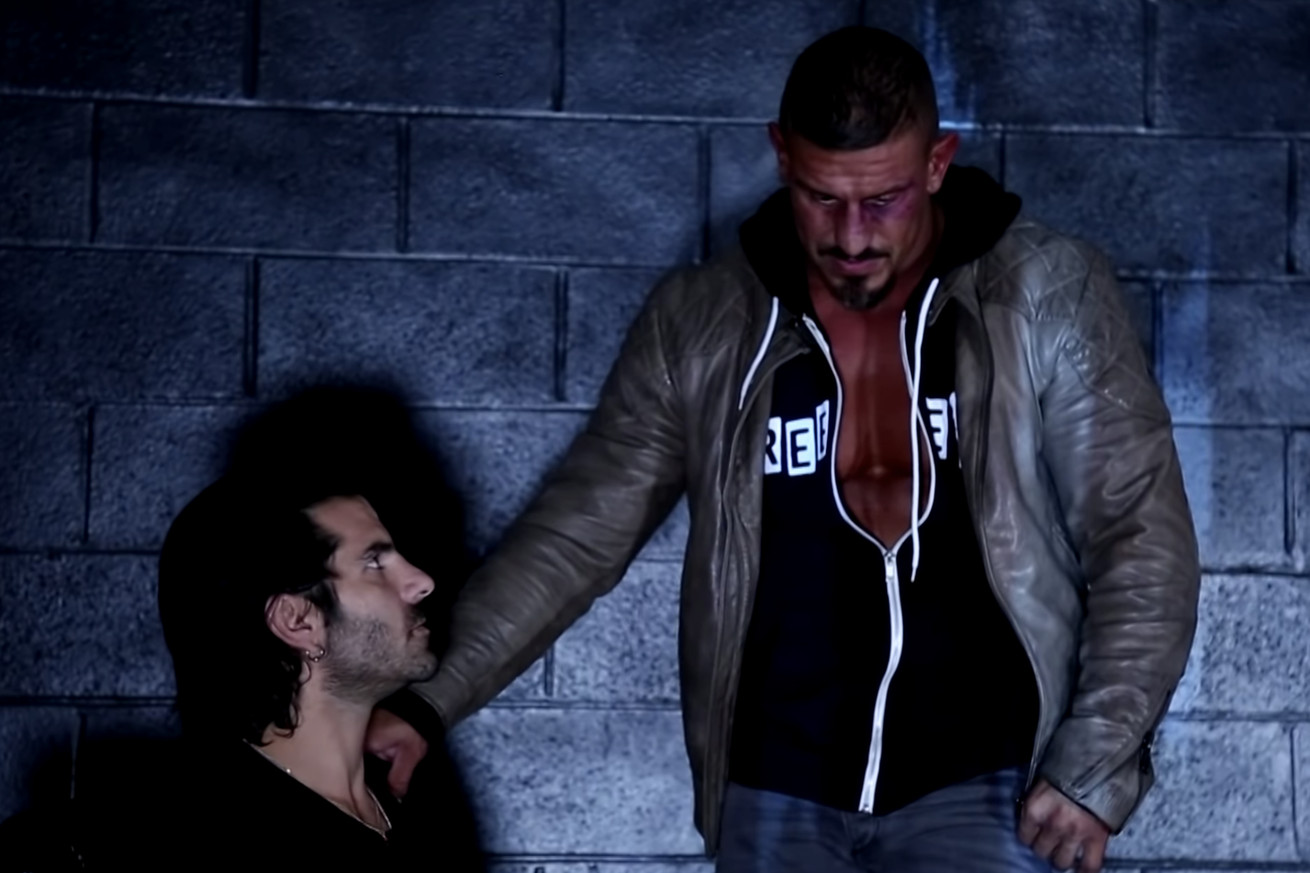 Impact Wrestling (Oct. 20, 2020) featured EC3 explaining his master plan, Rosemary winning the help of Havok to resurrect James Mitchell, and the Good Brothers getting the last laugh on Motor City Machine Guns during the go-home to the Bound for Glory PPV on Saturday, October 24.

The most newsworthy moment from the episode was a kidnapping. EC3 sequestered Jimmy Jacobs and proceeded to spill the beans about his master plan. It actually did a good job tying together EC3’s motivations for his fight with Moose at Bound for Glory.

Jacobs’ evening began innocently enough by interviewing Moose. The Wrestling God stormed out after Jacobs observed that he doesn’t look happy with the TNA Heavyweight Championship back in his possession.

Later in the show, Jacobs was seated beside EC3. I’m going to assume the henchmen drove Jacobs around in circles in the parking lot to throw him off the scent that he was actually next door at the same venue.

EC3 explained that we’re all prisoners of our own mind. His narrative was about control, freedom, and purpose, but that has shifted since a worthy adversary has emerged. EC3’s beating on the bridge left him with a black eye, however, it was actually cathartic. Moose has finally risen to the occasion to be the man EC3 thought he could be.

EC3 is proud of Moose. Too bad that this is not Moose’s narrative to control. EC3 is the one pulling the strings. Defeating a powered up Moose will allow EC3 to earn the right to destroy his past, namely the TNA Heavyweight Championship.

“Lessons not learned in blood are lessons you will forget.” @therealec3 is FINALLY seeing the side of @TheMooseNation he has been waiting to fight. #IMPACTonAXSTV pic.twitter.com/FbH7C3br0H

Great job to wrap up all the previous details. The overall story progressed a little slow, but the finish should be a bang at Bound for Glory when EC3 fights Moose at an undisclosed location. EC3’s passionate speech sold me that the intensity will be off the charts.

After seeing EC3’s first promo in ROH, it makes me wonder if EC3’s story is connected as one path. Ideally, the ROH promo should have aired after Bound for Glory, but the timeline didn’t quite work out that way. In ROH, EC3 is ready to fight. That leads me to believe EC3 will triumph at Bound for Glory and level up toward his ROH story.

Hernandez defeated Rhino, Heath, Cousin Jake, and Alisha Edwards in a five-way. Alisha would not be denied an opportunity by the men. She shoved them all, then Hernandez picked her up to sit on the top turnbuckle. Fighting between the men commenced. As Heath got near Alisha, she leaped onto his back for a choke. She also hit a flying crossbody outside the ring.

In the end, Jake saved Alisha from a Border Toss by Hernandez. She ran her mouth at Super Mex and slapped him. That contact allowed Hernandez to step back from a charging Rhino, who speared Alisha by accident. Hernandez rolled up Rhino for the win. As the winner, Hernandez earned the 20th spot in the Call Your Shot Gauntlet at Bound for Glory. As the loser, Rhino will enter 1st.

John E. Bravo was losing his cool at the wedding rehearsal. Taya questioned where he got that bossy behavior from.

Deonna Purrazzo believes that Impact is the place to be to be taken seriously as a women’s wrestler. At Bound for Glory, she can either crumble under the pressure or rise above to become great. High pressure is where the Virtuosa thrives. Kylie Rae has been emotional as of late. That’s when mistakes happen. Purrazzo plans to celebrate with delight at breaking Rae’s arm and retaining the Knockouts Championship at Bound for Glory.

The Knockouts Division began at Bound For Glory in 2007 and @DeonnaPurrazzo plans to continue that historic legacy at #BFG2020. #IMPACTonAXSTV pic.twitter.com/Shv65AGOgs

Rosemary defeated Havok. The hoss lady hossed up early. Rosemary came back with a reverse DDT. Havok fired up again, but Rosemary countered with a spear. A second consecutive spear sealed the deal for Rosemary. Since Havok lost, the stipulation is that she must assist Rosemary in resurrecting James Mitchell to officiate Rosemary’s wedding to John E. Bravo next week.

Kylie Rae wants to become Knockouts champ to inspire little girls dreaming to be pro wrestlers. Anger has gotten the best of her after seeing Purrazzo break Susie’s arm. Rae would never intentionally hurt anyone. Her motivation won’t be revenge.

[email protected] was forced to watch as @DeonnaPurrazzo broke her best friend @realsuyung‘s arm – she’s out for revenge SATURDAY at #BFG2020. #IMPACTonAXSTV pic.twitter.com/9eTE6DxZ8F

Sami Callihan defeated Eddie Edwards. This was a very physical bout with slaps, forearms, billy goat headbutts, and thumbs gouging the eyes of both men. Edwards hit the first big shot with a suicide dive, but Callihan rebounded for a brainbuster on the entrance ramp. In the end, Edwards had momentum after a Tiger Driver. He was biding his time to unleash Boston Knee Party. Callihan anticipated what was about to come his way and used his hacker phone to turn the lights out. Lights on and Ken Shamrock created a distraction on the apron. Callihan rolled up Edwards for the win.

Afterward, Shamrock pummeled Edwards with a belly-to-belly suplex and an ankle lock.

[email protected] has been UNLEASHED on @TheEddieEdwards once again. #IMPACTonAXSTV @TheSamiCallihan pic.twitter.com/iBuniFOsmY

Trey, TJP, & Willie Mack defeated Rohit Raju, Chris Bey, & Jordynne Grace. X-Division champ Rohit stirred the pot with his competitors in this sampling of the 6-way scramble at Bound for Glory. In the end, the action broke down with a bevy of signature maneuvers. Rohit was the last man standing after a flying knee to Trey, but Bey was the legal man. That delay allowed Trey to survive Bey’s pin. Bey attacked Trey on a springboard cutter, but Rohit tagged himself in. The delay in pinfall once again allowed Trey time to recover. Rohit and Bey argued. Rohit punched Bey, so Bey hit Rohit with a springboard cutter. Trey kicked Bey in the head then covered Rohit for victory.

Eric Young blamed all his violence on others not getting out of his way. Swann attacked Young. They brawled outdoors and knocked into the camera.

No contest between the Good Brothers and The North in the main event. Josh Alexander saved Ethan Page from a Magic Killer. Everyone began fighting in the ring, so the referee bailed and called for the bell.

Afterward, Ace Austin and Madman Fulton gave the bad guys odds against the Good Brothers. The Motor City Machine Guns made the save with all the babyfaces standing tall. Karl Anderson suckered Alex Shelley in for a handshake only to hit him with a cutter. Chris Sabin was next for a Magic Killer. The Good Brothers puffed out their chests ready for the four-way tag title match at Bound for Glory.

Another mixed bag episode from Impact. Half the matches didn’t really mean anything, since the Bound for Glory card was already set. At least the action was spirited. The promos shined though. They all built strong anticipation for the PPV.

Sami Callihan versus Eddie Edwards was my favorite contest of the evening. It was physical and downright dirty. The finish was a little curious in that Edwards took the loss. Sure, Callihan was sneaky, but it slightly tarnishes the the importance of a potential Ken Shamrock win over Edwards at Bound for Glory. I guess if Edwards is going to win, then it won’t matter.

It was interesting that the Good Brothers suckered the Motor City Machine Guns into an attack. It was one of those middle ground tweener moves. MCMG have had a snotty attitude toward Karl Anderson and Luke Gallows, so it wasn’t a blatant heel turn by the Good Brothers. That’s why I’m still on the side of Anderson and Gallows.

Share your thoughts on Impact Wrestling. Who stole the show? Was it an effective go-home toward Bound for Glory?