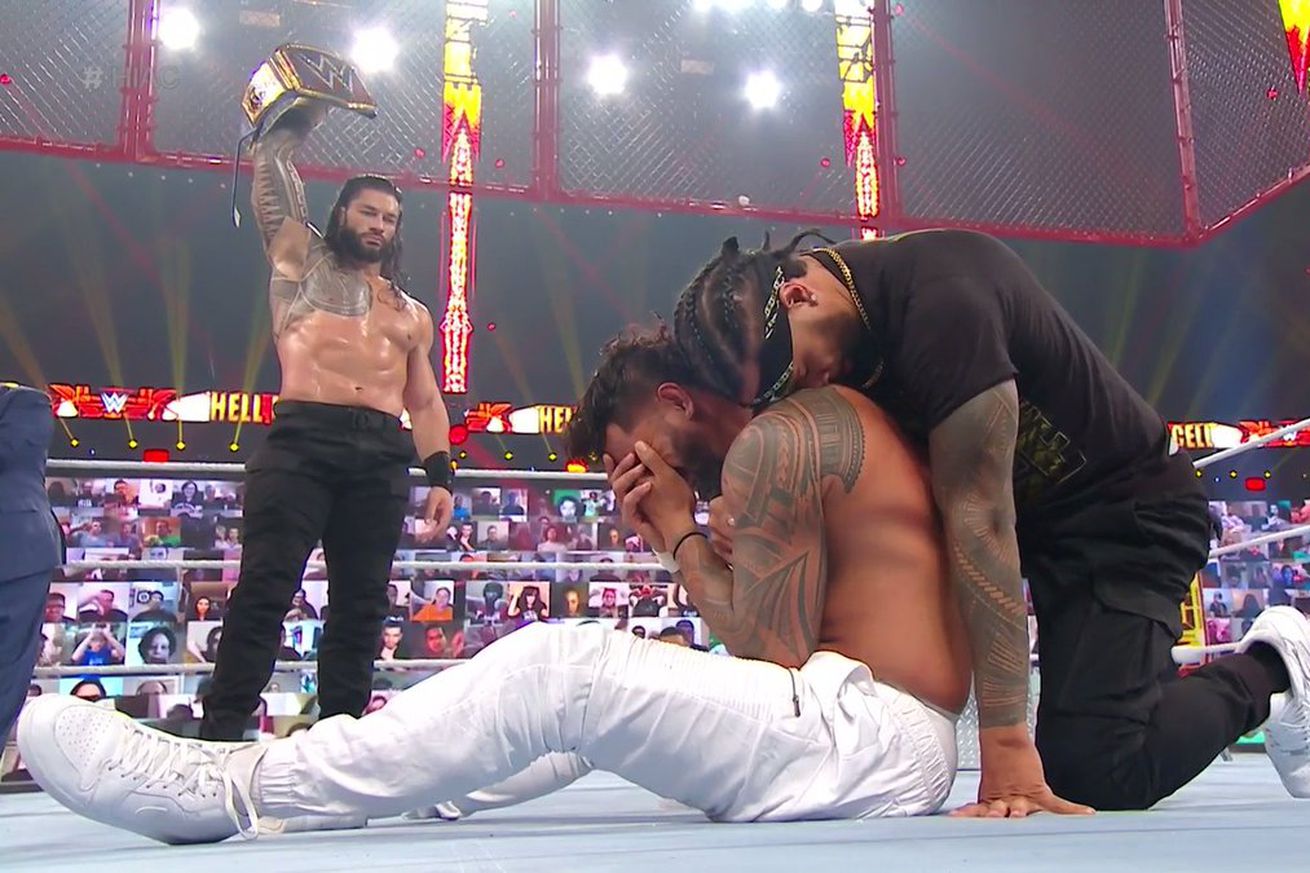 The deeply personal family feud between Roman Reigns and Jey Uso already had the former’s Universal title on the line at Hell in a Cell on Oct. 25. Then, for the first time ever, Reigns gave their Hell in a Cell match got an “I Quit” stipulation. But that wasn’t all. He promised the “highest stakes in history.” That seemed to mean* that if Jey lost and didn’t agree to follow Roman’s orders, both Usos and their families would be kicked out of the Anoa’i dynasty

Whatever the stakes, the alignments were clear. Uso entered the cell dressed in white. Reigns was clad in black, and asked forgiveness for what he was about to do.

Neither man had any quit in him early, despite two big Spears from Reigns, and two Uso Splashes in response. When Roman declared “the head of the table doesn’t quit,” Jey retrieved a leather strap from under the ring and put it to work.

That came back to bite him, of course. A third Spear knocked the strap out of Jey’s hands, and then Reigns used it on him. Roman tethered himself to his cousin, essentially adding a fourth stip… a Hell in a Cell I Quit Excommunicado Strap match.

Each man was almost rendered unconscious in the stretch that followed, but neither would say the words that would end the match.

Even though it wasn’t clear if Jey was knocked out or refusing to quit, a frustrated Tribal Chief continued to escalate things. He crushed Uso’s head between the ringpost and the steps with a drive by. Then when the referee wanted to stop the match, Reigns threw him off the cage.

That brought in the outside ref and producers from the back to try and stop Roman’s rampage. They couldn’t.

For the second straight PPV, it was Jimmy Uso who ran in to save his brother. While pleading for his twin, Jimmy seemed to be able to convince his cousin to change course and deal with “whatever he was going through” in a different way. A tearful Reigns looked like he was going to embrace that way, but instead grabbed Jimmy in a guillotine chock. Jey finally said “I quit” to get Roman to stop.

After the match, Reigns was met at the top of the ramp by Afa & Sika, who bestowed upon him the ceremonial beads to made his leadership of the dynasty official.

Get complete Hell in a Cell results and coverage of the entire show here.

* There was confusion on this point, with an edited version of Reigns’ Friday promo describing the stakes which aired tonight and announcers Michael Cole & Corey Graves claiming that Jimmy & Jey would be ousted from the family if Jey quit at all. Paul Heyman, however, explained that a Roman win meant Uso had to become an “indentured servant” of his cousin.