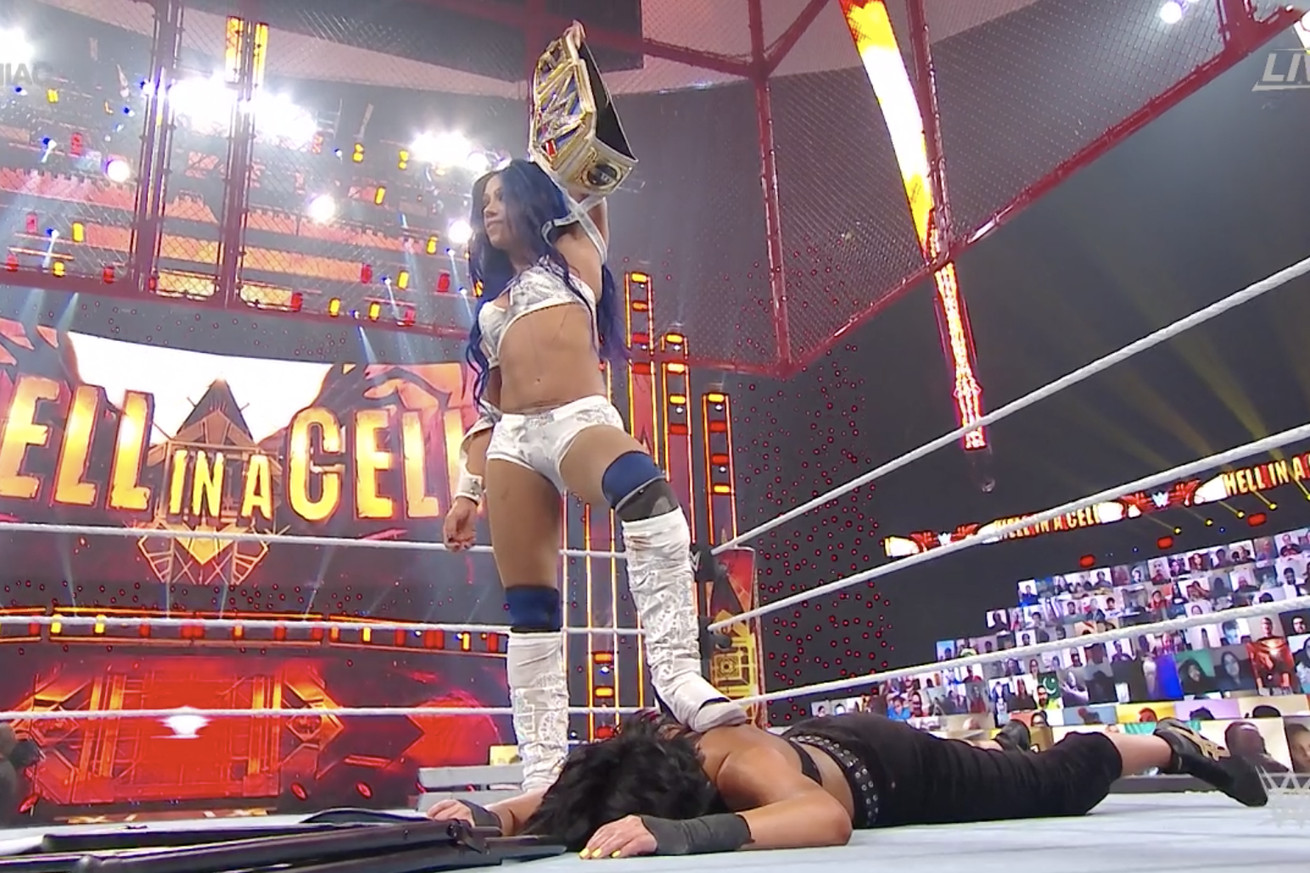 With some feuds, it would seem weird to have the first match take place in Hell in a Cell. But with a rivalry like Sasha Banks and Bayley, which dates back to 2015, and where even during the long stretch when they were teammates everyone was waiting for the hostilities to resume… well it makes more sense in their case.

Bayley entered the match on Sun., Oct. 25 with more than just her SmackDown Women’s title. She also had the chair she’s used to try and break Sasha’s neck on multiple occasions. But Banks was able to kick it out of the Role Model’s hands right before the cage lowered into place.

Next-level strategy from @SashaBanksWWE right off the bat. #HIAC pic.twitter.com/DdvLyRECbI

It didn’t take long for Bayley to get another weapon, though. And it didn’t take long for The Boss to kick that kendo stick away, too. Sasha brought out a table, and immediately used it to wreck the champ. A pair of meteoras – one into the cage and another in the ring – gave Banks a nearfall.

Chairs and more kendo sticks followed, with The Boss locking to inflict as much punishment as possible en route to her first win in the Cell (Banks is the 12th person to compete in three or more HIAC matches, and lost her previous two to Charlotte Flair & Becky Lynch). A series of counters ended up sending Sasha crashing neck-first onto the steps, and put Bayley in the driver’s seat.

Fighting spirit kept Banks going, and led her to power bomb the champ into the cage. But every time Sasha did some damage, her former friend answered with something more brutal.

Escaping a Bank Statement created an opportunity to smash Sasha’s face off the metal ring frame. Then she took too much time trying to build a better mouse kendo stick trap, though. In that time, The Boss got a fire extinguisher, a blast from which blinded the champ.

Banks’ beatdown ended with an emotional kendo stick assault in the ring. The weight of the moment with her long-time friend & rival seemed to give Sasha pause. Bayley protected herself somewhat on a Frog Splash by putting a chair between them. Another exchange drove a frustrated champ to set a ladder across two chairs in the ring. It backfired when the Boss used it to hit another meteora, then nailed Bayley with her own move onto the ladder, but it could still only get two.

A Belly to Bayley by Bayley got two, but when she tried for the move with the chair, Sasha countered and used the chair in her own submission. The Role Model fought a bit, but she was forced to tap to the Banks Statement.

Sasha is SmackDown Women’s champ, as Bayley’s historic reign is over. Is their feud?

Get complete Hell in a Cell results and coverage of the entire show here.