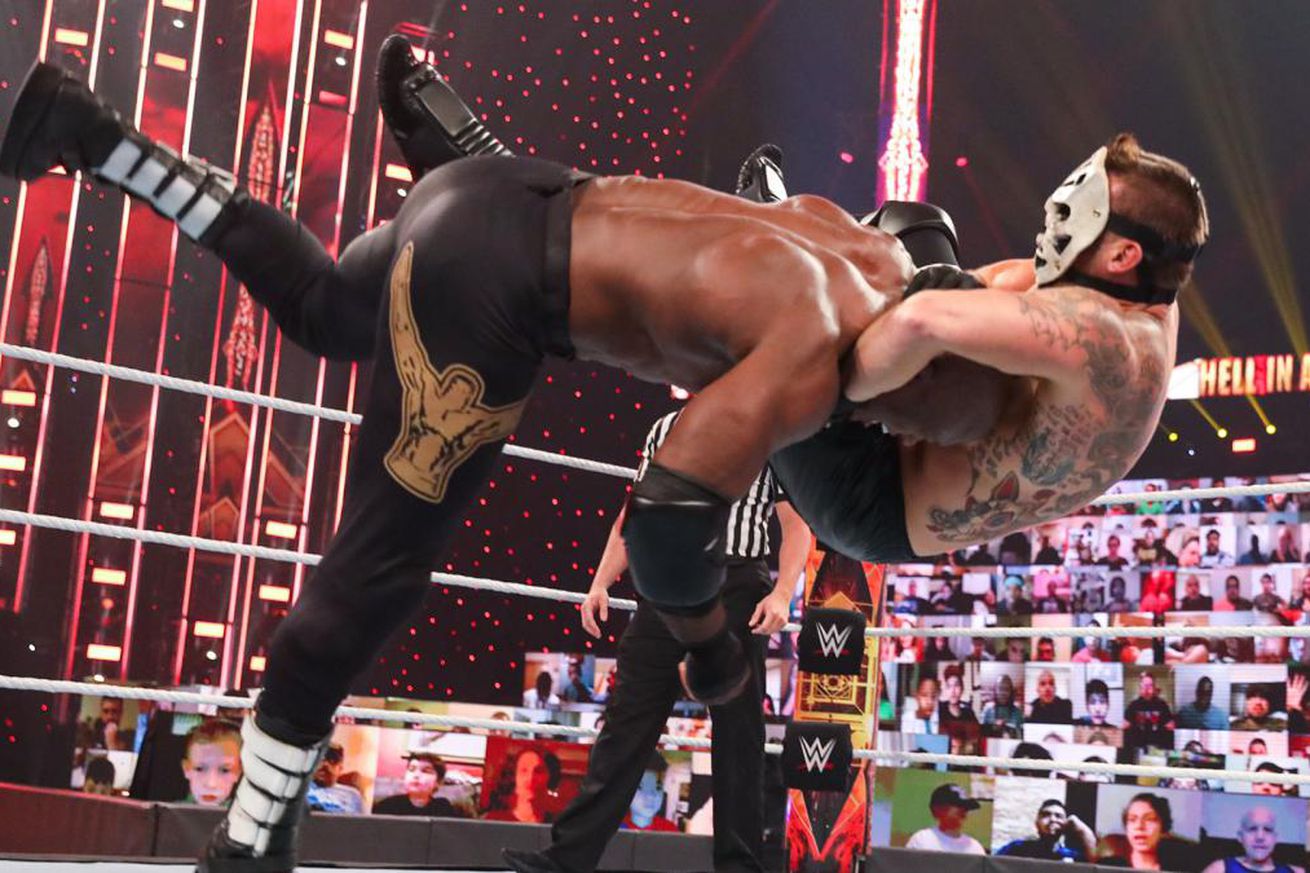 Most pro wrestling fans offered a hearty golf clap for last night’s Hell in a Cell match between Sasha Banks and Bayley. And I’m right there with them, it was a solid 4 out of 10 match. Good effort!

But their match paled in comparison to the elegant masterpiece that WWE delivered in the form of Bobby Lashley vs. SLAPJACK.

Fans were demanding this championship fight all weekend long, and if nothing else, WWE always listens to the audience and gives them exactly what they want. This was a dream match of epic proportions. Bobby Lashley is the unflinching leader of The Hurt Business who possesses a killer ass and a devastating finisher that no wrestler has ever escaped. SLAPJACK oozes testosterone from every orifice of his body, and is the most intimidating and mysterious member of the hottest act in WWE, RETRIBUTION. The WWE Universe was never going to be the same after these two gods of sports entertainment clashed at Hell in a Cell. The Hurt Business’ catchphrase “I’M IN” was designed for this very moment.

WWE Network subscriptions skyrocketed to unprecedented levels when Shelton Benjamin selected SLAPJACK to enter the ring for this once-in-a-lifetime encounter against the undisputed champion of America. After all, SLAPJACK is basically 1997 Sting all over again. He’s a silent, brooding figure with a covered face, donning the colors black and white, who will only wrestle on one pay-per-view over the course of a full year despite frequent run-ins on television. Like Sting in 1997, SLAPJACK’s existence is completely driven by the need to bring vigilante justice to an unjust and (deeply) illogical kayfabe world, and he won’t hesitate to use an occasional melee weapon to carry out his purpose. Power generators tremble in cowardice at the mere presence of SLAPJACK.

The most highly anticipated wrestling match of the year was finally set to begin. A torrid pace was set right from the opening ring bell. SLAPJACK flexed his overflowing muscles, resulting in his shirt flying off and launching like a bullet right into Lashley’s face. Just like that, it was immediately established that this stupefying figure standing across the ring from the champ was not your ordinary SLAPJACK.

Bob was relentless in the face of this unpredictable adversity, however, and managed to wrap his arms around his foe and trap him in the corner. He whaled away on SLAPJACK with almighty strikes, before catching a head of steam and thrusting a power shoulder right into SLAPJACK’s 12-pack abdomen. Lashley exploded in a fit of rage and tossed SLAPJACK around the ring, before crushing SLAPJACK’s torso with a high impact suplex. The audience stared on in awe and gasped at the bone-crunching noise. What a maneuver!

But the irresistible intrigue surrounding SLAPJACK’s mysterious identity became too much for Bob to handle. He furiously grabbed at the vigilante’s mask, desperately seeking to uncover the peculiar man hidden underneath. SLAPJACK’s master plan came to fruition, and he immediately took advantage of the diversion. He dashed, darted, slapped, and jacked his way around the ring, unleashing a flurry of carcinogenic blows that left gruesome welts all over Bob’s chiseled physique. SLAPJACK followed this up with his trademark cannonball in the corner, and the CEO of the Hurt Business was fading fast. SLAPJACK was so caught up in his tremendous success that he forgot to move Lashley’s prone body to the center of the ring. As a result, Bobby was too close to the rope for the referee to make the surefire three count that would have finally brought the star-spangled championship home where it belonged, with RETRIBUTION.

Undeterred, Lashley rose up and charged forward, but he ran right into SLAPJACK’s iron boot and iron will. SLAPJACK twirled around Lashley in a whirlwind of excitement to land a game-changing tornado DDT. This was it! The referee hurried into position to make the count, almost tearing both quads in the process. 1…2..Lashley somehow kicked out! The “Holy Shit” chants were deafening from the piped-in crowd noise at the ThunderDome. SLAPJACK could not believe it! He’d never come that close to winning a match before. The adrenaline rush that surged through his body was disturbingly addictive, and he knew that he needed to go to a darker place to finish the fight. That’s when SLAPJACK briefly rubbed his mask against Lashley’s skull on the mat, using his deadly pheromones to subdue Lashley’s mind and weaken his previously impenetrable defenses for one final blow.

Motivated by pure patriotism, Lashley managed to shake off those toxic effects. He intercepted SLAPJACK on the top rope, slamming him all the way down to the mat with thunderous force. Lashley executed a perfect overhead belly-to-belly suplex and then a modified chokeslam for good measure, because that’s what CEO’s do to vulnerable men who are down on their luck.

SLAPJACK was on spaghetti legs. He weakly reached towards the ring ropes, hoping T-BANE would be there to give him a chainsaw or molotov cocktail, just like he always did in the past. However, SLAPJACK forgot that his anarchist faction agreed to play by the rules yet again, and so there was nobody ringside to offer assistance. There wasn’t even a giant fake spider anywhere in sight. If he squinted a little harder he probably would have seen all the shovels circling around him, but unfortunately his vision was compromised after taking such a beating. With all hope now lost, Lashley picked his prey off the mat and slapped jack with the Hurt Lock. SLAPJACK is well known for his seemingly infinite threshold for pain, and he fought like hell with every fiber of his being to escape, but after one or two seconds it was time to tap out. The match was over!

I could not believe my eyes at this incredible spectacle of sports and entertainment. That’s right, Bobby Lashley actually defeated SLAPJACK to retain the United States championship. Unbelievable! It doesn’t get better than this, folks. This victory was the legacy-defining moment of Bob’s career, easily surpassing that time when his sisters visited Raw.

After the match was over, Mustafa Ali and a few of Akira Tozawa’s ninjas hit the ring and tried to gang up on Lashley. But he fought off those jabronis and they ran away, keeping everyone in suspense and on the edge of their pillow for what’s to come next for RETRIBUTION.

With this classic main event match in the books, I assume the cameras went dark before WWE went ahead with an exhibition match between Randy Orton and Drew McIntyre to close out the night for the live fans in attendance. It was probably something of a test run so that McIntyre could gain the experience that he’ll need to match the elite level of SLAPJACK when they meet in the main event of WrestleMania 37. Keep working at it kid, you’ll get there one day.

If you haven’t seen Lashley vs. SLAPJACK yet, then you need to seek it out ASAP. My eight minute recap can only capture a small amount of the drama and storytelling that was crammed into this four minute bout. Thank you for putting a smile on my face last night, WWE. Bobby Lashley versus SLAPJACK was truly the greatest match in the history of our sport.