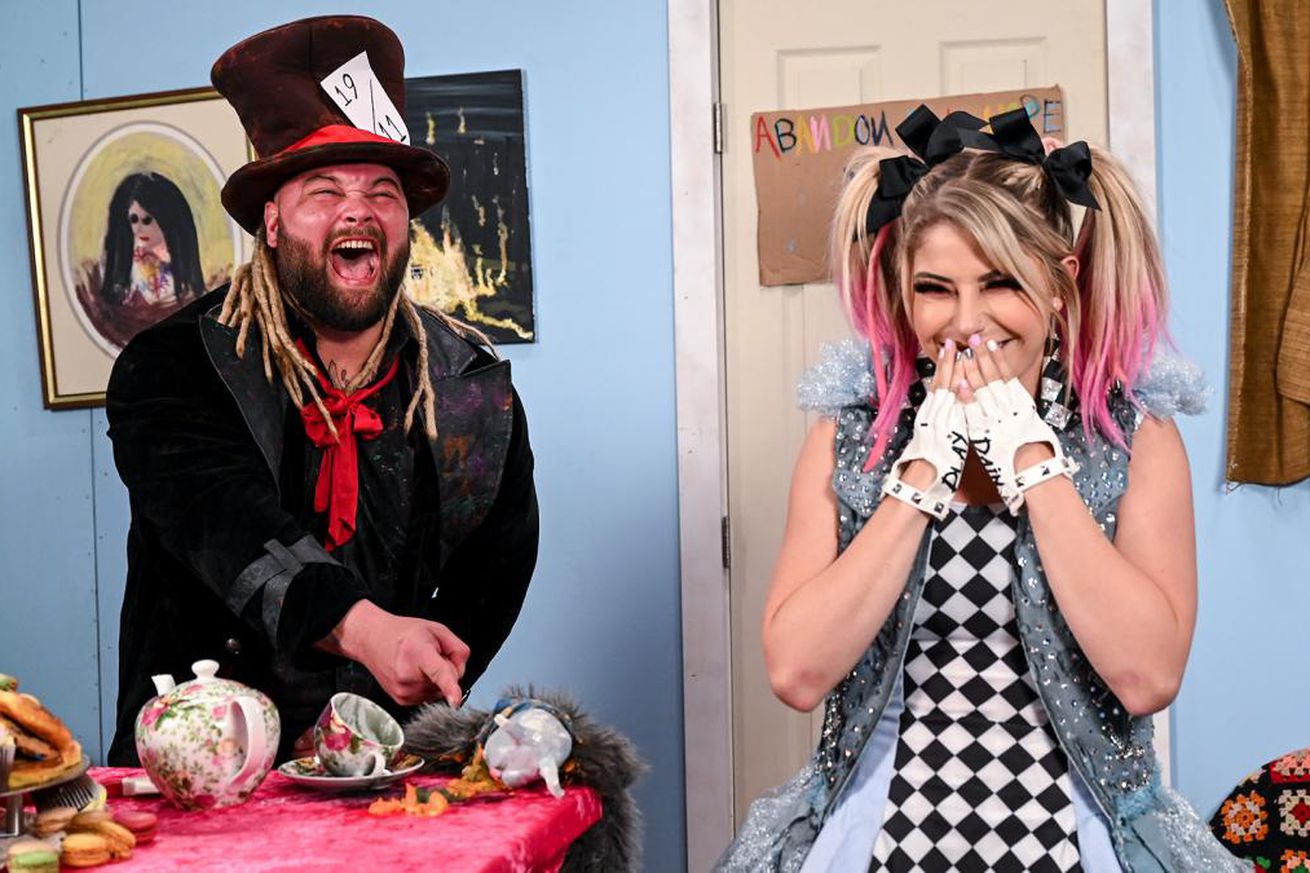 Alexa Bliss has let him in.

So we had a very interesting Firefly Fun House and main event on this show, and while I really enjoyed most of it, I’m left scratching my head about one key part.

In the Fun House, Alexa Bliss brought tea for Ramblin’ Rabbit and attempted to kill him. They did some continuity playing up Orton’s past with Bray with a picture of a house on fire which I believe has always been in the Fun House but was a nice angle.

On A Moment of Bliss, Randy could tell that something was up, because Alexa did absolutely nothing to hide the fact that the Fiend was going to show up. She’s doing this role perfectly. I know a lot of people aren’t really into the horror aspect of this, but I am digging it. Alexa is a horror fanatic so she’s living her dream right now.

But instead of the Fiend showing up, McIntyre appeared and started brawling with Orton as Alexa sat up on the top turnbuckle laughing. The lights then went out, and came back on with only Drew in the ring and Orton up on the ramp. They did the classic “shit he’s behind me” camera angle and facial with Orton and Orton slowly started walking back down to the ring.

This is where it got strange. Drew totally ignored the Fiend. I… don’t get it. He brawled with Randy around the ring and then onto the announce table, and the show went off the air. Fiend completely disappeared, and Drew acted as if none of that happened. Why?

Later on Drew gets involved with Miz and Morrison and it leads you to believe that’s Drew’s next feud, but then they do this. I am confused. I think all of this would have been fine with me if the show ended with Orton up on the ramp and a Mandible claw in his mouth. I worry about how they’re going to book the Fiend here, because if that was any type of inclination, I don’t see good things in the future.

And yeah, I know how capable they are of trashing the Fiend’s booking. It’s the reason why I quit WWE after last year’s Hell in a Cell. When it comes to the Fiend, I’m cautiously optimistic.

Drew McIntyre def. Miz – All the promo before this did was continue to remind me how much I hate Miz and Morrison together. McIntyre’s bored and uninterested look as they were talking was all of us. Me, at least. Shout out to angry Miz girl from 10 years ago.

Miz tossed Drew into the steel steps and they played up Miz crashing through the table last night. Miz took control and Morrison took a cheap shot while the ref wasn’t looking. Morrison then tried hitting Drew with the briefcase but he tossed Morrison 50 feet and threw the briefcase up the ramp. Miz had a really nice sell of the Claymore.

AJ Styles def. Jeff Hardy – Styles did some talking but all I can really focus on is how friggin huge Jordan is. He’s nearly as tall standing outside the ring as Styles standing in the ring. WWE finds weird spots to go to commercial. Hardy dove off the ropes and into Jordan, and then they cut right there. Jeff had a cool pin attempt after a side Russian leg sweep. If Jeff really knew of the threat that Jordan is, I don’t get why he would use the ringposts on the side the behemoth was standing next to, because it cost him the match. Really nice Phenomenal forearm.

I somehow forgot about the whole Elias thing and jumped when he attacked Jeff after the match. That’s not going to be a fun continuation. I’m expecting this to last until 2021.

Keith Lee def. Elias – The match started off right, with Lee dominating. Then a bunch of Elias getting over on him, and then what I thought would be the ending of this was Strowman coming out to distract Lee. We got Jeff distracting Elias instead! While I hate that the feud is continuing, I rather have Lee in the Survivor Series match, so I’ll take it. Also, why is Jeff better at smashing guitars than the dude with the actual guitar smashing thing? That guitar shattered.

Sheamus def. Matt Riddle – Every guy fighting to be on the men’s Raw Survivor Series team was on SmackDown a few weeks ago, except for Keith Lee. That’s a bit strange. This match was pretty good. Sheamus is a great brawler and he brought the ferocity here. Riddle sold Sheamus’ double knees across the back of his spine really well. I almost thought he was legitimately injured. Riddle’s back gave out on a Bro Derek attempt and Sheamus hit the Brogue kick for the win. You know what? These dudes have some pretty good in ring chemistry together.

Lana wins a fatal four way – and then gets put through the announce table again by her Survivor Series partner, Nia Jax. Strange that Nia couldn’t put that gimmick away for a few weeks so she wouldn’t injure someone on her team, but semantics I guess? Also, Nikki Cross was in this match and Alexa Bliss is a crazy lady right now, and it’s weird that after all of their history together, they aren’t using her to close that friendship up and make Nikki look more like a concerned friend.

New Day and Asuka rock – New Day dressed up as Street Profits and did their old gimmick of announcing matches, this time for Survivor Series. They’ll be facing Street Profits, Lashley will be facing Sami Zayn (remember that feud, y’all?), Orton and Reigns will face off, and Asuka will face Sasha Banks. Asuka came into the shot and told The Hurt Business that she and New Day rock and then danced. I love her. I love all three of them. Kofi went full Dawkins. Never go full Dawkins, fam.

Lucha House Party def. Akira Tozawa and Drew Gulak – WWE cares more about putting random people who shouldn’t be tagging together in a match than building actual tag teams. It’s really ridiculous. R-Truth came out and everyone tried to pin him, and then Dorado dove off the top rope to pin him but pinned Gulak instead. They all chased Truth to the back. Pointless match.

The Hurt Business def. RETRIBUTION via DQ – What the hell was that camerawork as RETRIBUTION walked down the ramp? Holy shit. Lashley started with T-Bar and they traded barbs. Mia Yim started flopping around in the ring trying to brush something off of her and MVP got distracted and was eliminated by Slapjack. Lashley eliminated him after the break. Lashley and T-Bar were counted out. Shelton eliminated Mace, and then there was one. Ali caused a DQ using a chair on Cedric.

I’m now realizing that WWE was smart to hire the violent anarchist group because the world is being shown every week how terrible they actually are at everything. Perfect example of dudes who talk shit and have nothing to back it up.

This show wasn’t bad, but I’m still finding more things to dislike than like.

One thing’s for sure — it’s time for BRAND WARFARE again! You know, because Survivor Series is the… only… time Raw and SmackDown go head to head. Only time. I swear.