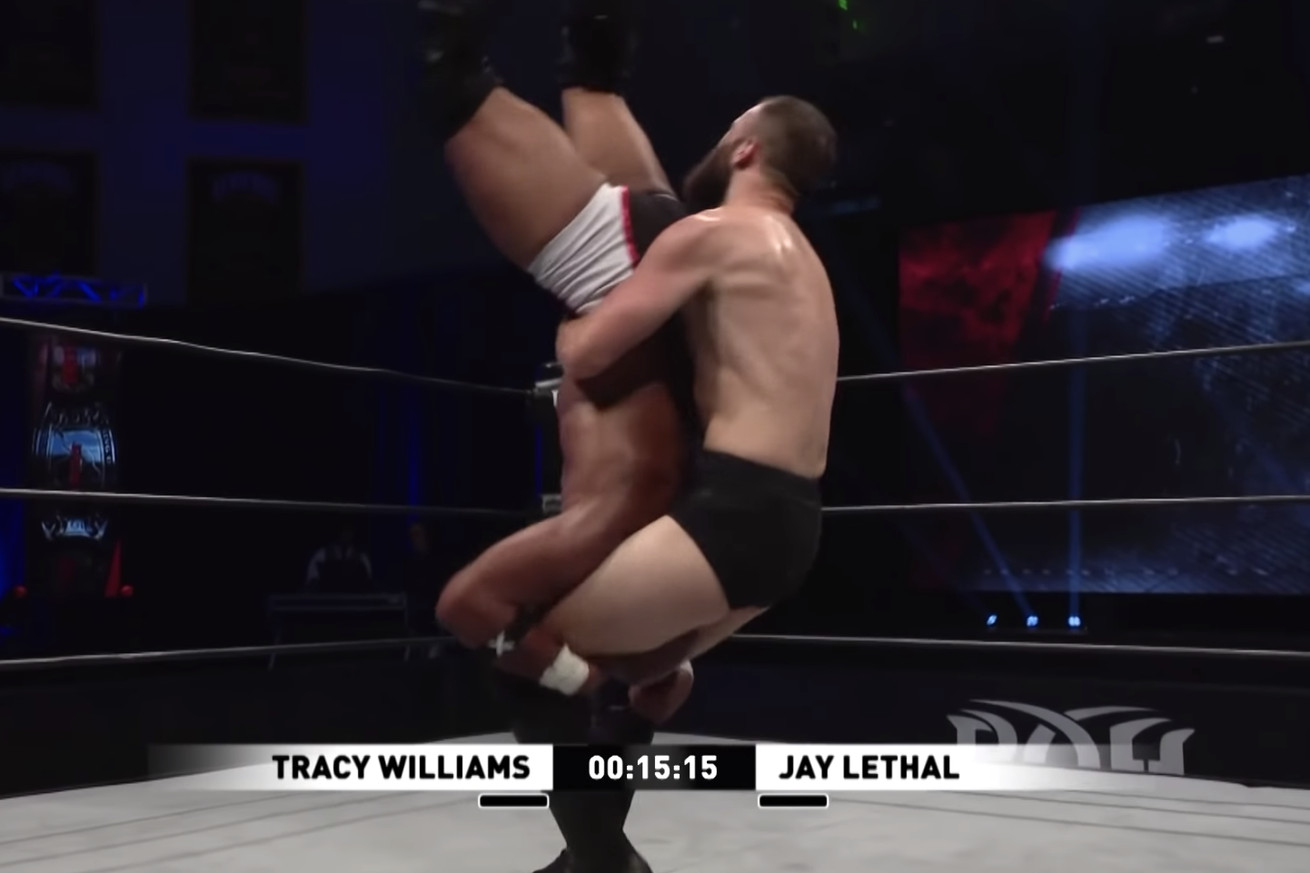 The ROH Pure Championship tournament was whittled down to the final two competitors in episode 475 of ROH Wrestling. Jonathan Gresham had to figure out ways to topple the much larger Josh Woods, and Tracy Williams was forced to grit through the pain against Jay Lethal. There was also a promo exchange between EC3 and Shane Taylor as well as a fisticuffs exchange between Vincent and Matt Taven.

Let’s break down the show.

Quinn McKay opened with a recap of last week’s bouts and comments from the winners. Tracy Williams was upset that Jay Lethal didn’t mention his name. He wondered if Lethal even knew who he was. Williams will teach his name to Lethal by force. Silas Young pumped up the win of Josh Woods. Young said Woods will have no reservations about fighting Jonathan Gresham. Woods thought he meant reservations for dinner.

30-minute time limit. Gresham was tentative to start. Woods’ size advantage was too much. He picked Gresham up in a gutwrench, so Gresham grabbed the rope for his first break. Gresham came back for a single leg, and Woods gutwrench slammed him. A suplex attempt sent both men over the ropes down to the floor. Gresham favored his knee, while Woods agitated his shoulder and elbow.

Gresham caught a knee strike and countered into a dragon screw legwhip into the rope. Woods rebounded with a big toss off the top turnbuckle. Gresham got his foot on the rope during the pin for his second break.

After two gutwrench slams, Gresham escaped the third and wrapped Woods up in an octopus stretch. Woods reached for the rope, so Gresham hooked his arm and dropped heavy elbows to the head. Woods powered up for a slam to escape.

Gresham went low to tweak Woods’ knee. On a leapfrog attempt, Woods’ leg buckled in pain. Gresham pounced for a leglock attempt, however, Woods grabbed him for an inside cradle. The two combatants rolled around on the mat fighting for position. Back on the feet, Gresham scored a sunset flip for the winning pin at 12:00. Gresham advances to the Pure Championship tournament final.

This was supposed to be a grudge match, but Vincent ambushed Taven before the bell for a brutal beating. Vincent pulled out Taven’s huge purple ladder for more violence. Taven had used that same ladder to win the ROH World Championship, and Vincent claimed that was when Taven forgot about his crew. Vincent climbed the steps and jumped off for a cannonball senton onto Taven through the table.

Just because EC3 didn’t mention Shane Taylor’s name in his promo last week, that doesn’t mean he doesn’t know about Taylor. They fight for the same things. The reason EC3 didn’t mention him alongside other greats is because he hasn’t earned it.

Taylor responded that his hostility is about respect. He fights for his people. Taylor plans to adjust EC3’s attitude.

30-minute time limit. Williams started with focus on Lethal’s tender leg. Lethal countered into a side surfboard. Williams got free and took Lethal down while snatching the leg again. Lethal reached out for his first rope break. On a quick exchange, Williams caught Lethal in a crossface. Lethal’s leg forced the second rope break. Williams used his first break on a figure-four.

During the commercial, Lethal hit a neckbreaker and dropped knees to the upper spine. Back from break, Williams locked in a Yurikamome. Lethal was able to escape.

The match progressed to the outside. Williams hit a running shotgun dropkick. His landing on the floor seriously damaged his shoulder. In the ring, Williams talked smack. Lethal attacked with a dropkick to the injured socket. Lethal went to work with strikes to the shoulder, a shoulderbreaker, and a Fujiwara armbar that resulted in Williams’ second rope break.

Williams fought back with a barrage of strikes. Lethal neutralized him with an enzuigiri to the shoulder. Williams tricked Lethal for a DDT into the top turnbuckle. He powered up for a discus clothesline and a piledriver. Lethal barely got his foot on the rope before the count of three for his third break.

Williams went for a crossface, but Lethal escaped to hit a cutter. After a handspring cutter, Williams got his foot on the rope for his third break. No more rope breaks for either man.

The finish was high drama. Both fighters stood toe to toe exchanging chops. Lethal attacked Williams’ shoulder again. Lethal went high risk for a flying elbow drop. He went to finish it with a handspring cutter, but Williams caught his back for a rear naked choke. Lethal got his foot on the ropes. There was no break though since he already used his final one. Lethal used the ropes to flip over into top position for a pin, so Williams transitioned into a crossface. Lethal tapped out at 19:29. Williams advances to the Pure Championship tournament final against Jonathan Gresham.

Both contests delivered excitement in the Pure Championship tournament final four. It was interesting to see Gresham’s chess match against the larger, more powerful Woods. Chopping down the tree always works. It was one of those instances where I think Woods wins a rematch once he gains more experience. The main event nicely worked the rope breaks to provide a thrilling conclusion. The lure of gold giving Williams the mental boost needed to fight through the pain was a nice touch to the story.

Fighting through the pain with his eyes set on the Pure Championship @sauce_williams is not giving up!#ROHPure

I’m a little disappointed that Lethal didn’t win. A final fight versus Gresham would have been very cool. Williams has good skills and his lanky physique allows him to play the comeback role well, but he has no natural charisma, in my opinion. I’m also concerned that Williams’ shoulder injury will hinder his performance against Gresham. Assuming he has one week to recover, that still may not be enough time. Gresham should be able to make mincemeat out of him.

Next week’s show will feature the Pure Championship final between Jonathan Gresham and Tracy Williams. Also, EC3 will make his ROH in-ring debut when he teams up with the Briscoes in trios action against Shane Taylor and his crew.

In other action, ROH offered a bonus match during Week by Week, starting at 9:49. Rocky Romero teamed with Kenny King against the duo of Rust Taylor and Dalton Castle for a random draw wildcard bout. It was a solid bout with a cool wristlock helicopter spin from Taylor. King pulled it out in the end with a Royal Flush side slam to Taylor.

The Honor List countdown is back with the greatest moments from Death Before Dishonor and Matt Taven’s greatest ROH moments. Check those out for plenty of cool highlight clips.

Share your take on episode 475 of ROH Wrestling. Which of the two bouts did you prefer? Whose performance stood out most? Who are you picking to be crowned Pure champion?