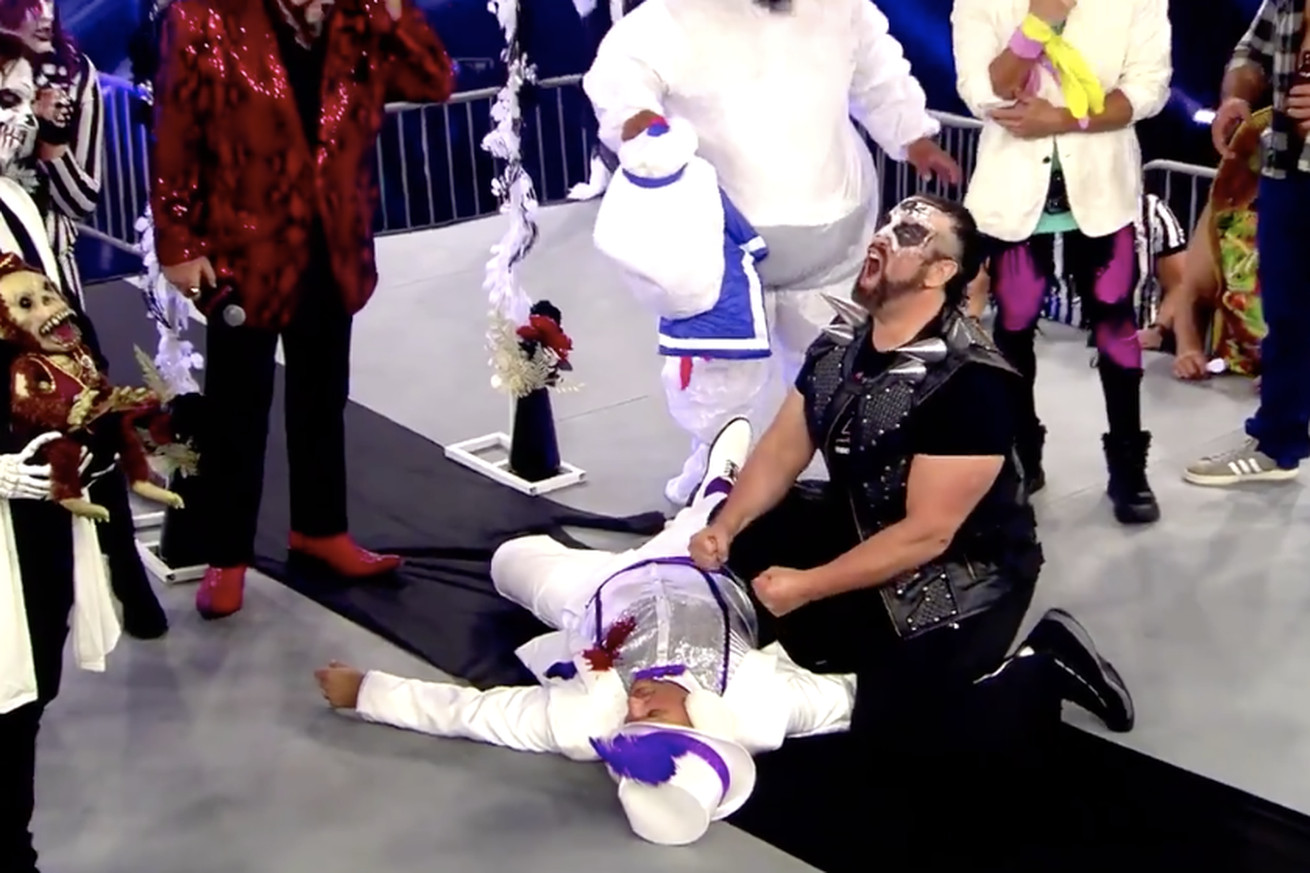 Everyone loves a wrestle wedding. The end result is always crazy hijinks. The matrimony between Rosemary and John E. Bravo did not disappoint on Impact Wrestling (Oct. 27, 2020). In fact, it went so far over the top that Bravo may be murdered.

The wedding was the main event segment, but there were a few little scenes leading up to it. Havok informed Nevaeh that Father James Mitchell was resurrected to oversee the demon ceremony. Hernandez and Reno Scum cornered Fallah Bahh to get Super Mex’s money back. Bahh lied to say Bravo had the cash. Later, Bravo confronted Bahh about the fib he told Hernandez. Bravo was going to rat Bahh out next time he sees Hernandez, and Bahh will have to deal with the consequences.

Before the wedding kicked off, Taya wanted to talk to Rosemary backstage about Bravo becoming a controlling bridezilla. Rosemary was not concerned. She has something much better planned for Bravo than leaving him at the altar.

Now it was time for the big moment. The spectators wore Halloween costumes ringside. Bravo came out in a white tuxedo with purple flair. Crazzy Steve walked Rosemary down the aisle. She wore a black and white pinstripe dress. Father James Mitchell officiated the ceremony.

Impact actually pulled a minor swerve at this wedding. Nobody interrupted the vows, despite three separate occasions to do so. Bravo gushed that he is destined to be with his little gargoyle. Rosemary was pleased with the extra virginal blood running through his veins. Swoggle handed off the jewelry as ring imp. Bravo and Rosemary exchanged the golden symbols of love. Both answered affirmative to the final question with, “I do.” Mitchell pronounced them man and wife.

Right as Bravo and Rosemary leaned in to kiss, the lights went black. A loud gunshot rang out with a muzzle flash. The lights came back on, and Bravo was lying on the mat with a bloody wound on his chest. Tommy Dreamer wondered aloud, “Who shot Bravo?” Dreamer then shouted a dramatic, “NO!!!!” as the show closed.

Here is the full ceremony.

Well, that was certainly unexpected. And totally awesome!!! If Impact was going to be over the top, then it can’t get much more ridiculous than that. Time for a good old-fashioned whodunit mystery.

Hernandez seems to be the prime culprit at first glance. Don’t get in between him and his money. Rosemary’s choice of dress may become foreshadowing for her to spend time behind bars. James Mitchell is a creep, so you can never rule him out.

For more wedding fun, check out the countdown of Impact’s wildest weddings.

What was your reaction to the outcome of the wedding between John E. Bravo and Rosemary? Who’s on top of your suspect list?