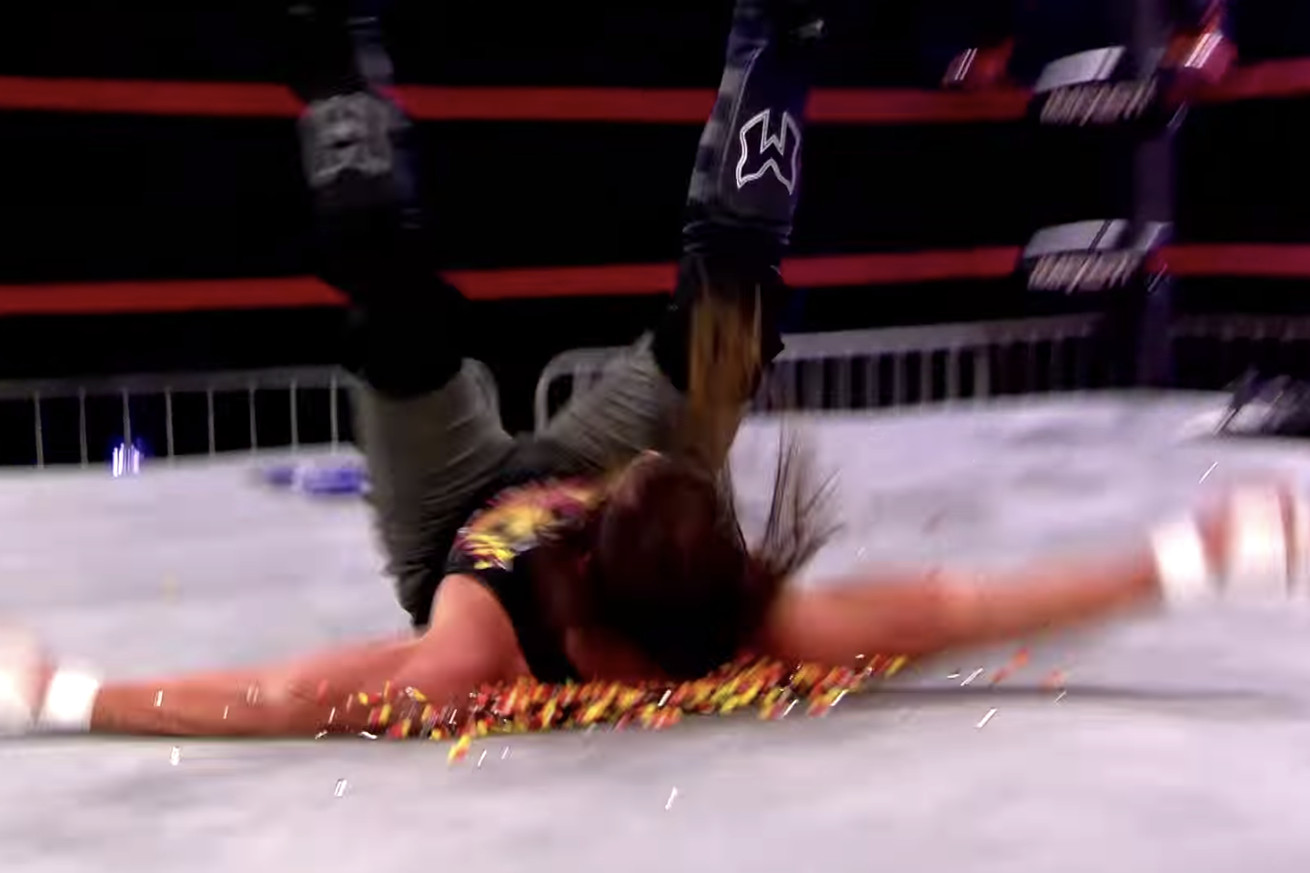 Impact Wrestling (Oct. 27, 2020) featured fallout from Bound for Glory. Rich Swann closed the door on Eric Young, but he has new challengers eyeing the Impact World Championship. Tommy Dreamer used candy corn and thumbtacks in a Hardcore Halloween match. Finally, the wedding between Rosemary and John E. Bravo resulted in someone getting shot.

The big stories of Swann defending the title against Young and the shocking ceremony for Rosemary and Bravo have already been covered. The next best segment belonged to Tommy Dreamer and Brian Myers. They competed in a Hardcore Halloween match.

Dreamer came out in homage to Road Warrior Animal, while Myers wrestled in generic street fight gear. All kinds of foreign objects were used. There was a baseball jersey, a walker, an atomic drop onto a guardrail, a kendo stick, apples, trashcans, a wet floor sign, chairs, and a ring bell.

The wackiest utensil of pain came when Dreamer emptied out a sack of candy corn mixed with thumbtacks. Myers went crashing down into that mess.

Trick or treat? Why not both! @THETOMMYDREAMER sends @Myers_Wrestling CRASHING into thumbtacks and candy corn. #IMPACTonAXSTV pic.twitter.com/ZKocnupXVB

In the end, Myers was in control with a kendo stick. All of a sudden, Swoggle crawled out of a garbage can and grabbed Myers’ junk with kitchen thongs. Dreamer picked Myers up for a DVD through a table while yelling, “What a rush!” Dreamer won in a match that he does best.

This was a fun little fight fitting into the Halloween theme. Myers still has claim to being the most professional wrestler, since Dreamer benefit from Swoggle’s interference. Even though Dreamer won, there is still meat on the bone of this feud if Impact decided to carry on with it.

Before we get to the recap, let’s go over the results from Bound for Glory, in case you missed it. Rich Swann won the Impact World Championship, Su Yung returned to win the Knockouts Championship, The North won the Tag Team Championship, Rohit Raju retained the X-Division Championship, Moose controlled his narrative against EC3, Ken Shamrock bested Eddie Edwards with help from Sami Callihan, and Rhino won the Call Your Shot Gauntlet, which means Heath gets a contract with Impact.

Let’s roll through the rest of the Impact Wrestling episode.

The show opened with Eric Young ambushing Rich Swan backstage. The action carried to the ring and had to be separated by security and EVP Scott D’Amore. Young wanted a title rematch right then. D’Amore denied that request until Swann spoke up to accept. D’Amore honored the new champ’s desire.

Impact World Championship: Rich Swann retained against Eric Young. (Full details here.) In the end, Swann used his agility for a handspring cutter and a Phoenix splash to win.

Havok told Nevaeh that Father James Mitchell has been resurrected to officiate the wedding.

News broke that there will be 8 teams in a tournament vying for the Knockouts tag titles. The women looked around for partners. Kiera Hogan and Tasha Steelz made fun of Alisha Edwards, since she was alone. Jordynne Grace stepped in to have Alisha’s back, and a tag bout was made for later in the show.

Everybody is eying up potential partners for the Knockouts Tag Team Title Tournament – could @MrsAIPAlisha and @JordynneGrace be the perfect team? #IMPACTonAXSTV @HoganKnowsBest3 @RealTSteelz pic.twitter.com/KYBvsqHQvW

Rhino and Heath were interviewed backstage about the Call Your Shot Gauntlet. Rhino said he’ll use his title shot for tag team gold once Heath gets healthy. Heath was excited about signing his new deal next week. When asked about being hurt, Heath brushed it off. I got the impression that he was worried his injury might cancel the contract before it gets signed. Or maybe he’ll be out of action for a really long time and doesn’t want Impact to try to get out from paying him.

[email protected] plans to use the Call Your Shot trohpy to challenge for IMPACT World Tag Team Titles with @HEATHXXII! #IMPACTonAXSTV pic.twitter.com/Z2Zu4w71R9

Hernandez and Reno Scum surrounded Fallah Bahh to get Super Mex’s money back. Bahh claimed he didn’t have it anymore and pointed the finger toward John E. Bravo. After they left in search of Bravo, Bahh pulled the cash out of his underwear.

XXXL defeated Rascalz. Dez and Wentz hit surprise flips onto the big men to start the bout. The super heavyweights rebounded with power to take control. Larry D wanted to go high risk, but the Rascalz climbed up to cancel that. Acey Romero slammed Dez down to the mat then Larry launched for a flying splash to win.

[email protected] and @legendoflarryd just made a statement in the tag team division. #IMPACTonAXSTV pic.twitter.com/RekXENkhRC

D’Amore was in a meeting with Deonna Purrazzo, Kimber Lee, and barrister Artie Evans (aka Archibald Peck). Evans threatened a lawsuit if D’Amore didn’t strip Su Yung as Knockouts champ and reinstate Purrazzo as title holder. He gave D’Amore until the end of the night to make a decision. D’Amore didn’t need that much time and headed to the ring to make a public announcement.

Alex Shelley was in a neck brace. He’ll be hurt for two months. Chris Sabin said they were never pinned at Bound for Glory, so they’re coming back for a rematch when Shelley is 100%. XXXL interrupted about wanting to be #1 contenders. They didn’t want the Motor City Machine Guns to hold up the division. Bickering ensued. XXXL left, then they came back for a big belly smash to sandwich Shelley.

D’Amore was in the ring to address the Knockouts Championship controversy. He declared that Su Yung is the rightful winner. He offered Purrazzo a rematch next week instead of her wasting time and money on a lawsuit. Purrazzo accepted. Su came down to the ring, goozled Lee and Evans, spit red mist in D’Amore’s face, and choked out Purrazzo with the mandible claw.

Swann was backstage celebrating with Willie Mack and the Rascalz. Enter Moose with his TNA title. That makes him #1 and Swann a pretender. Moose insulted Swann’s upbringing. The Rascalz held Swann back, while Mack stepped to Moose. The TNA champ told Mack that they will fight when he says so. Swann walked around backstage into a room with Sami Callihan and Ken Shamrock. They issued a warning to the Impact champ that he’ll be hearing from them.

The North soaked in adulation for being new tag champs. The Good Brothers interrupted. Ethan Page insulted them as the worst investment Impact ever made. Luke Gallows returned fire about Page’s Karate Man indie gimmick. Page slapped Gallows across the face. Security rushed in to prevent a brawl.

[email protected] just called @The_BigLG and @MachineGunKA the worst investment IMPACT has ever made and things EXPLODED. #IMPACTonAXSTV @Walking_Weapon pic.twitter.com/a8dkJxJUeQ

Rohit Raju was having a party for retaining the X-Division Championship. No one was there until Jimmy Jacobs walked in. Jacobs accused Rohit of stealing the win from TJP.

Bravo was onto Bahh’s money scheme and heard rumors that Hernandez is coming for Bravo. Bravo will rat Bahh out to Hernandez.

Kiera Hogan & Tasha Steelz defeated Jorydnne Grace & Alisha Edwards. Competitive match with a story of trying to establish Grace and Edwards as a potential team. In the end, Grace powerhoused with a hot tag. Alisha tagged in and accidentally ran into Grace when Steelz sidestepped. Steelz scored the roll-up victory as Hogan grabbed Grace’s foot to pull her out of the ring. After the match, Grace and Edwards shoved each other. Grace gave Edwards a disrespectful look upon exiting.

Taya wanted to warn Rosemary that Bravo has become controlling. Rosemary had something better in store for Bravo than leaving the altar.

Main event wedding. (Full details here.) John E. Bravo and Rosemary pulled off their matrimony without a hitch. The only problem was that the lights went out before a kiss, and someone shot Bravo in the chest. No big deal. It’s just a flesh wound.

This was an enjoyable evening from Impact. The show did a good job closing doors, opening doors, and setting up big matches for next week. Purrazzo vs Su Yung should be entertaining.

The wedding was goofy fun. Impact acknowledged wrestling’s propensity for shenanigans during the nuptials and saved their big bang for afterward. A big bang it was. It was funny how Dreamer seemed to be the only person who cared that Bravo was shot. Everybody else stood around gawking. I look forward to the upcoming mystery.

Now that we know the women’s tag title tournament will have 8 teams, let’s look at who could be involved. There are only 14 women officially on the roster, so that means a few outsider should get a call. The 5 established pairs are:

That leaves Alisha Edwards, Jordynne Grace, Madison Rayne, and Tenille Dashwood. What other teams would you like to see in the tournament?

I’m curious how Moose has changed. It seems like the same guy so far, but the big tell will be if he adjusts his style in the ring. Out of all Swann’s potential challengers, Moose is the one I’m most interested in. That is if he has truly evolved from his feud with EC3.

Speaking of EC3, he was not present on the show, however, he did release his own statement with jibber-jabber about the industry.

The first step to immortality is how you die.

How can one be bound for glory when glory in this industry has been:

This industry needs a #Rapture #YouHaveBeenWarned#ControlYourNarrative#FreeEC3

Share your thoughts on Impact Wrestling. Who stole the show? Do you like the story directions post-Bound for Glory?