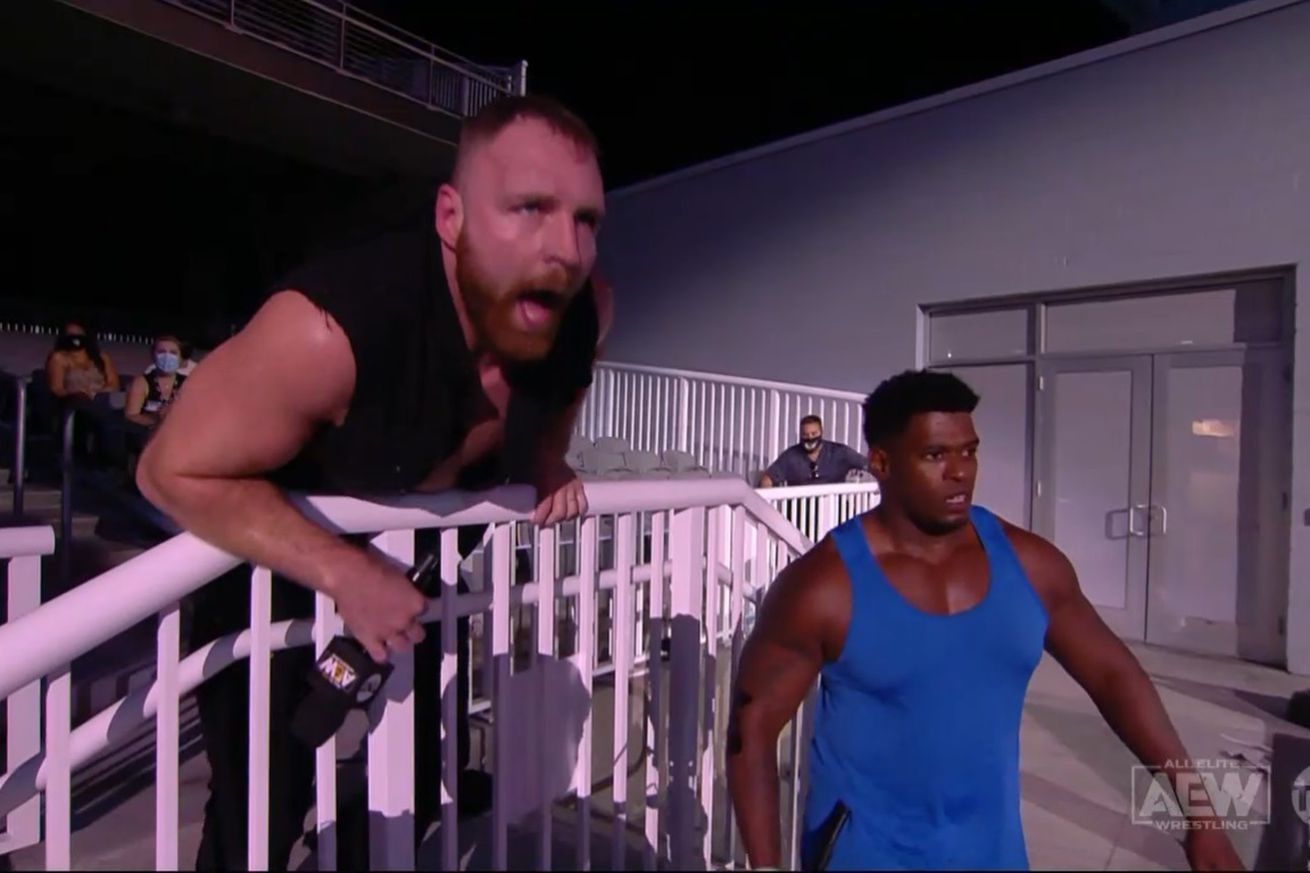 All Elite Wrestling comes our way live from Jacksonville, Florida. Last week, The Young Bucks superkicked a ref, Matt Hardy was attacked backstage, Kenny blew off Hangman, Eddie Kingston riled up his family and set them on the warpath, Jericho & Hager began their quest for tag team gold, Thunder Rosa put the AEW women’s roster to shame, Will Hobbs joined forces with the AEW Champion, and The Best Friends killed Proud and Powerful in the parking lot.

Taz and Jake The Snake have entered into a diabolical deal. If Lance Archer wins The AEW Championship, they promise to give Brian Cage a championship match. In return for that generous favor, they (Taz, Cage & Starks) will help them weaken their opponent. Talk about the wrestling equivalent of selling your firstborn!

Unfortunately for them, and perhaps surprisingly to the audience, Jon Moxley has friends, and he ain’t afraid to use them! Newly signed Will Hobbs will join the Champion as will his erstwhile partner, Darby Allin.

I don’t know what’s going to happen, to be honest. There is a lot of power and a lot of chaotic elements headed into this match. Jon Moxley singles championship matches have historically been boring. Perhaps this chaotic match paired with this equally chaotic alliances will add a little spice to that meeting.

Thunder Rosa (NWA Women’s Champion) has dominated the AEW women’s division over the past few weeks, which has been great if a little embarrassing. Fortunately, her presence has inspired the rest of the roster to step up, including The AEW Women’s Champion, Hikaru Shida. Tonight, the duo of champions will face the AEW women’s tag team cup winners, Ivelisse and Diamante. Can they work together, or will an actual tag team be their kryptonite? Even more important, what will the AEW women’s roster do when Thunder Rosa isn’t there to inspire them?

FTR is on top. Not only are they the Tag Team Champions, but they not only made it clear to the entire roster just how little of a threat they are, but they have expertly manipulated The Elite into a break-up and have pushed The Bucks into full heel territory. But, while everything is coming up FTR, they may be a little TOO overconfident. Not only do they have a roster full of enemies, but The Young Bucks gone bad are historically unpredictable. FTR better watch their backs!

It’s been a busy couple weeks for Mr. Brodie Lee, TNT Champion. He’s had to defend his title more than, frankly, any heel should. It’s gone a long way to cement his presence as a formidable force within AEW – which is doubly important considering that his legion, The Dark Order, is once again struggling to be taken seriously. Speaking of not being taken seriously, tonight, he faces Orange Cassidy for the championship. This is a wild match up! First, GOOD for Cassidy! He deserves this title shot. He’s been stealing the show since his debut and has been slowly building himself up into championship material. If it weren’t for the looming presence of The American Nightmare, I’d say he was likely to win. I don’t think he wins tonight, but I don’t think he loses clean either. My prediction is that Brodie Lee comes too close to losing, so The Dark Order interferes. Cue Best Friends vs. Dark Order!

-Chris Jericho is on commentary tonight. Historically, that means we can expect some kind of shenanigan around the announce table. He can’t help himself.

-Are Proud and Powerful alive? What’s the state of The Inner Circle after that embarrassing loss?

-Eddie Kingston has been telling The Blade to “get his house in order.” Could we see a confrontation between The Blade and QT Marshall? Allie, AKA The Bunny, is no damsel, but could she be persuaded to switch teams?

-More insights into just what kind of best man Miro will be.

-Jurassic Express? I mean, they don’t have a match or anything, but they somehow are always on TV. I just assume they’ll be there. Eating time.

NXT reportedly moving from Full Sail to the Performance Center

This version of Roman can take him to another level