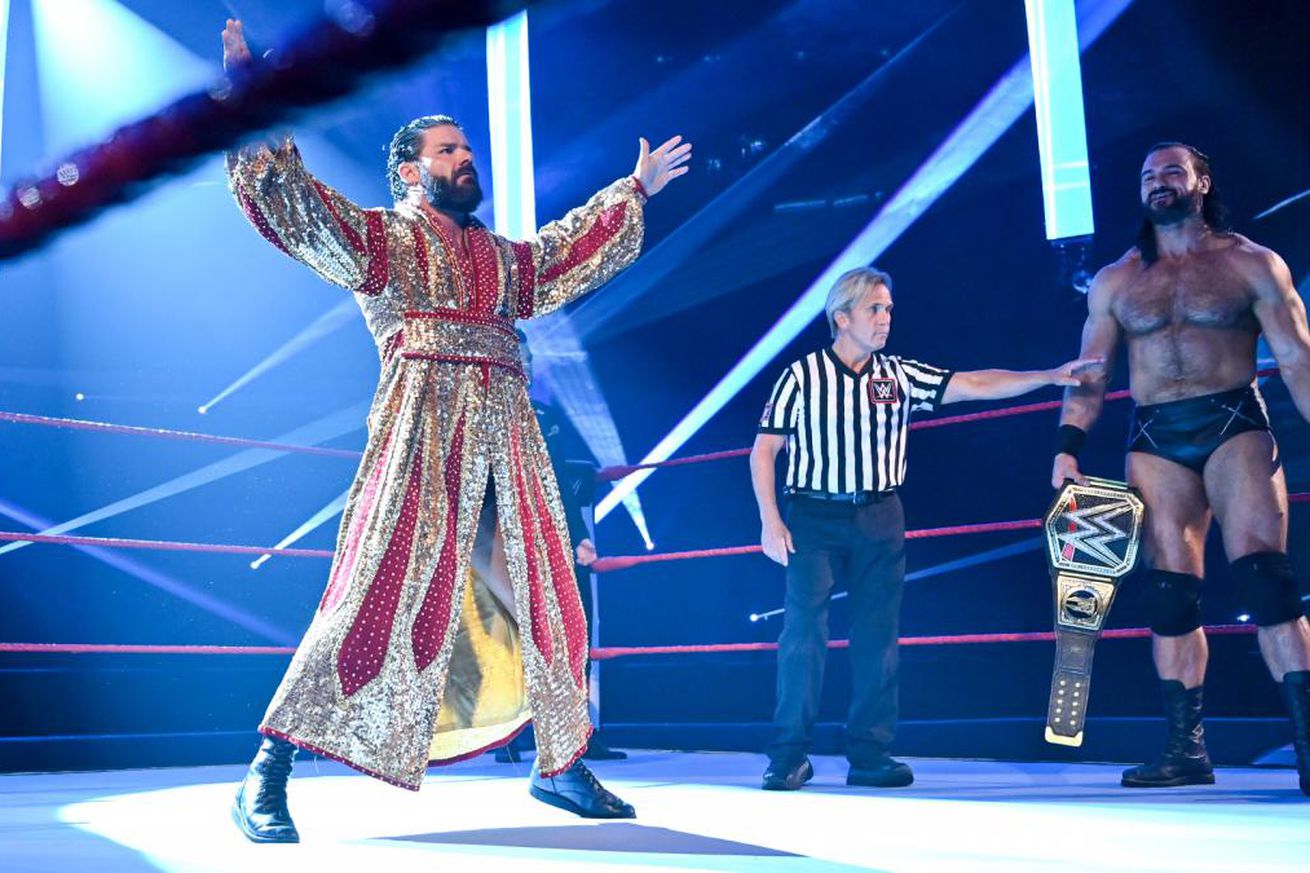 Shawn Michaels, Big Show, Christian, and Ric Flair were out to talk about Clash of Champions.

Shawn said that McIntyre didn’t know they were going to be there but said he’d understand if he was mad.

McIntyre came out and spoke nicely about each man in the ring, and then issued an open challenge for Raw’s roster who have yet to face him for the WWE title. Orton then appeared on the tron and said that he would be facing McIntyre again for the title because he’s Randy Orton and he gets what he wants. As for the other men, they would be getting what’s coming to them. He then left the building.

But we all know leaving the building means absolutely nothing in WWE.

Attempts at nostalgia rarely pop me, and this one was no different. Michaels and Flair have been all over WWE television as of late and I don’t really care about Big Show. I don’t mind Christian, though. They don’t trot him out 5 times a year to promote something so seeing him puts a smile on my face.

In the main event, Dolph Ziggler got the returning Bobby Roode a match for the WWE title. I was so incredibly not into this match that I happened to find Alexa Bliss tweeting about what happened on this show with Murphy, and found that more entertaining.

After McIntyre won, a cloaked figure with a janitor’s outfit entered the Legends Room with a chair and night vision goggles.

Surprise! It was Orton. Shocking, I know.

Here’s why I didn’t care about the match – Drew has spent a majority of his title reign facing guys who didn’t deserve title shots. This was no different in my mind. Okay yes this time it was an “open challenge” so that’s an out for WWE. It’s not an out for me. After last night’s incredible booking with the Roman Reigns/Jey Uso family stuff, we deserve better.

Orton’s part at the end was dastardly, and that I liked.

I have wanted a draft for a while, and I’m finally going to get it. However I’m going to talk about why the timing of it is bad.

They did a spot where Murphy had to leave his phone laying on a box so Rollins could take it.

On the King’s Court, Aalyah Mysterio said that she was still hurt by Rey’s words last week, but she said that anyone who comes in contact with Seth is bad and there’s something wrong with them.

Cue Seth on the tron, and he said that Aalyah wasn’t being truthful. He somehow got a screenshot of text between Murphy and Aalyah to production lightning quick. Aalyah ran to the back and Murphy confronted Seth, but Dominik tackled him and a match between the two was announced for later.

What a match that was. It had some shades of Murphy and Ali matches from 205 live. Dominik grabbed a kendo stick and was about to hit Murphy, but Aalyah came out and tried to stop him. Both she and Murphy tried to tell him it wasn’t what he thought, but Murphy took advantage of Dom’s back turned to him and scored a victory. It was a weird looking pin, which has been happening as of late in WWE.

He chased Murphy off and then told his sister she really is naive, and she slapped him. I’m enjoying Dominik and Murphy matches, but I know that adding the sister only continues this feud until Hell in a Cell, at least. Gosh it’s just been too long now.

This needs to end at Hell in a Cell.

Asuka def. Zelina Vega… again – Vega put a nice stretch submission on Asuka early into the match. Vega was smart to keep targeting the left arm like last night at Clash. They kept going back and forth and Vega got a near fall before Asuka put her foot on the bottom rope at the last moment. Vega didn’t do enough though, and got another Asuka Lock for her troubles.

I’m not a fan of losers getting immediate rematches. While Zelina did pretty well here, it would have made more sense to me if Asuka just laughed her off last night and held off on doing a rematch until the next pay-per-view. Very rarely do I get into these types of automatic rematches.

Keith Lee def. Andrade – Andrade started by telling Zelina off as she started crying and walked to the back. He issued an open challenge of his own and Keith Lee answered. Andrade was able to answer much of Lee’s offense, while Lee was able to ragdoll him around, and deliver a wicked Spirit Bomb to get the win. This was a quick match and I actually enjoyed it.

I had a thought that maybe they’d repair the relationship between Zelina and Andrade while Garza is out injured but nope they went full jerk with it. Looks like Andrade has himself a singles career until Garza returns, and I’m not unhappy about it.

Crews, Ali, and Ricochet def. The Hurt Business – MVP said he didn’t know what was going through Crews’ mind as he keeps deciding to step to the Hurt Business. (I’d like to know too!) HI MUSTAFA ALI! Everyone brawled until the lights started flickering and RETRIBUTION’s logo appeared all over the place.

Everyone died for us, essentially. Big spots and at one point Ricochet dove onto Benjamin and looked like Benjamin’s shoulder went right into Ric’s spine. Ow. But Ali was able to get the victory for his team pinning MVP, which I believe he also did the last time they were in the ring together. Unfortunately, the babyfaces winning means that this feud will also be continuing. Another feud that needs to end by Hell in a Cell.

Aleister Black gets disqualified by a stupid referee – New music alert for Aleister Black. It’s a bit more screamo but I’ll reserve judgement until I hear it in my headphones. Can someone tell me why Aleister hates Kevin Owens so much? These guys are violent with each other and I do appreciate that. The ending was ridiculously stupid and Drake Wuertz is an idiot. (Not just in kayfabe.) So this feud will keep on going!

Mandy Rose and Dana Brooke def. Lana and Natalya – Latalya were complaining about not being given the tag titles since Shayna and Nia are out. Adam Pearce came out and said that they’d get a match between them and the new Raw signees. Mandy hit a frightening kick that almost could have led to an injury to Lana before she got the win. Let’s see what happens with this new tag team.

By the way – there’s a draft in two weeks but they’re already signing new people? What’s the point of two draft shows then?

R-Truth def. Akira Tozawa and Drew Gulak – Before this match, they had all of these guys win the 24/7 title off of each other, and then immediately announced this triple threat. Odd. Truth is now 41 time 24/7 champion. Gulak and Tozawa worked with each other and against each other for the whole match. Truth hit Gulak with the Attitude Adjustment to win which popped me.

So, let me explain why the draft timing is bad.

Hell in a Cell is Oct. 25. The draft is Oct. 9 and Oct. 12. That leaves very little time between that Monday’s draft to Hell in a Cell. Why can’t they just let Hell in a Cell decisively end feuds, and then do the draft? Makes me think not much drafting is going to happen and we’ll still see Rollins and Mysterios and Andrade/Garza and Street Profits when Garza returns. And holy shit get Apollo and Ricochet away from The Hurt Business. It’s been done to death, revived, and killed again. We’re in for a wild October.

Where, and when, Jon Moxley plans to retire