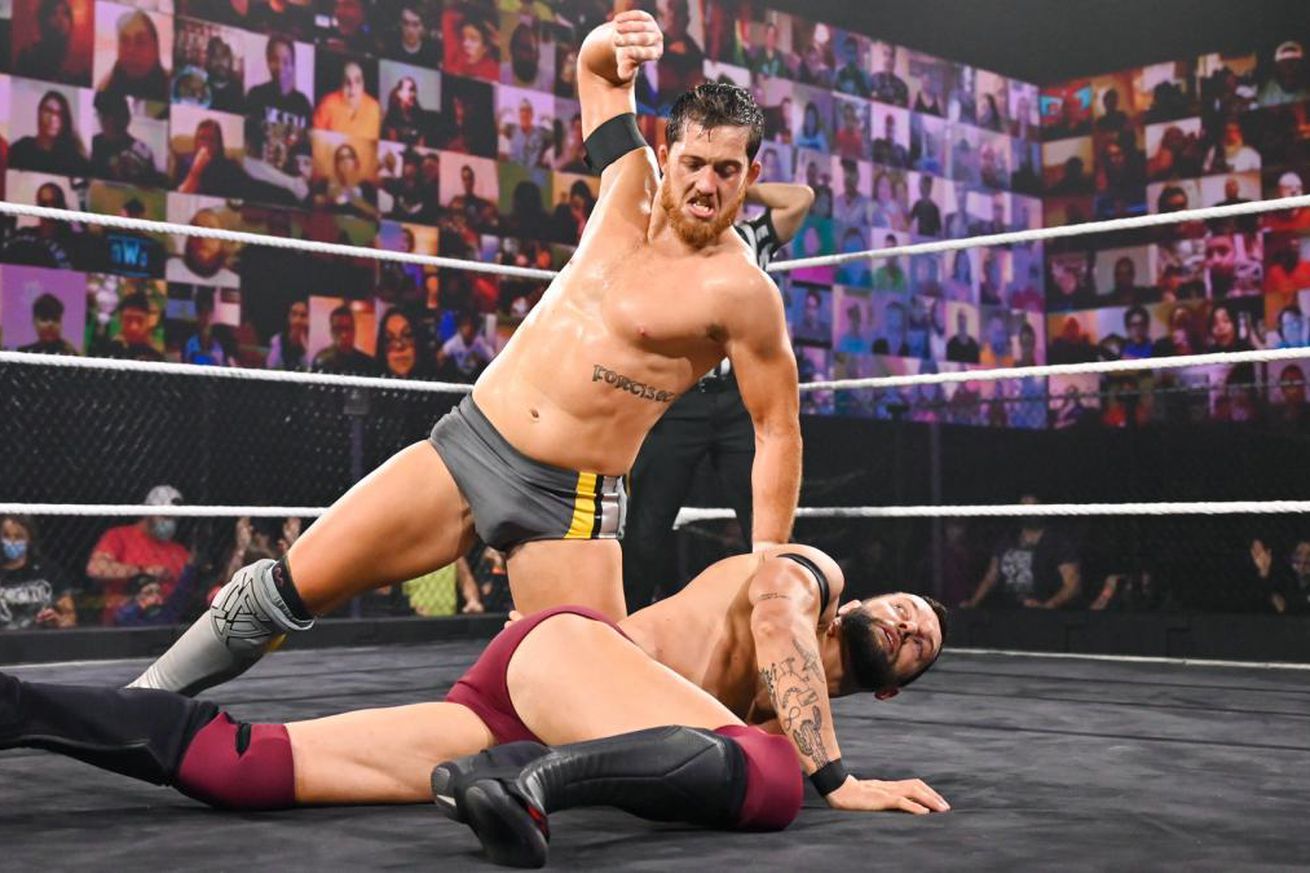 NXT returned last night (Oct. 4) with their latest special in TakeOver 31 from the Capitol Wrestling Center (formerly WWE Performance Center) in Orlando, Florida. You can find the results at the live blog here.

The main event was a banger of a match.

It established Kyle O’Reilly as a threat as a singles star despite losing to Finn Bálor. He endured abdominal pain stemming from a well placed kicked to the gut from the champ to stormed back and do what he does best – target the leg and try to earn a submission.

It led to a style of match that was different than your typical NXT main event. You know, those matches that are high paced, limited on selling, with multiple finisher kick outs. Instead, this was a more ground based match focused on two mean trying to outwrestle the other with more of a submission focus.

This type of match is more appealing to me than those others. Not that they’re bad or I haven’t enjoyed a good deal of them. But this is more my speed. The ending felt abrupt after a great flow, but the rest was top notch.

There was no interference from Undisputed ERA at all, which was surprising but welcomed. Kyle losing a very tight bout all by his lonesome did much more for him than losing with a bunch of ERA BS in there.

Now the very end of the show was weird. After KOR accepted a handshake from Bálor, the camera panned to the crowd to show newcomer Ridge Holland holding a beaten Adam Cole over his shoulder. He dropped Cole on the floor and walked off as Roddy Strong and Bobby Fish ran out to see what that was all about.

It surely an odd way to end. Ridge Holland is new so if he’s a new big villain for the ERA boys, it’s quite the jump for the man. It’s not the hook that has me dying to watch on Wednesday, but I’m curious what the angle is.

But the important takeaway here is they elevated Kyle O’Reilly big time here. That’s what matters.

Io Shirai and Candice LeRae put on a good match for most of the time. It wasn’t the level of their match a year ago, but still very good. But the ending got almost silly and then multiple returning women took the headlines.

It all started with back to back ref bumps. The idea was likely that the second one (where a missed Io moonsault hit the referee) happened because he was just accidentally hit in the eye by LeRae when he was trying to get her to break a hold. But ref bumps in general can be eye rolling so two is a bit ridic.

This brought down Johnny Gargano who was wearing a referee shirt and tried to quick count Io Shirai, who kicked out. (As if that would have been legit anyway.) The actual official eventually recovered and argued with Johnny, who was able to slip his wife the championship belt during this. He left the ring as Candice clocked Io with the belt.

But Io kicked out before three and soon put LeRae away with a top rope Spanish Fly and her moonsault.

So all the Gargano shenanigans weren’t enough to make it even feel close against the champion. I’ve wondered for awhile what they’re doing to do with these two and I think after this, with Candice not at all effective stealing one from Shirai and Johnny losing earlier (more of that in a bit), they may be leaving NXT as part of the WWE Draft. Because there’s not much for them here after losing as their newest characters.

After the match, Toni Storm popped up on the big screen telling Io that she’s coming to NXT. She didn’t mention it, but they were in the finals of the second Mae Young Classic so there’s some history there. Then Ember Moon revealed herself as the mysterious motorcyclist so there’s a former champ that has her eyes on the prize.

The Women’s division, the strongest in wrestling, just got stronger. That’s another reason I think Candice may be on her way to the main roster.

If this was a farewell match for Candice, I can understand why they went this way. Put over the champion strong on the way out. If not, it’s going to take a good deal of work to build her back up after this.

This match opened the show and it had a bit working against it, at least in regards to my enjoyment.

One was the fact this was the first match inside the new look PC (Capitol Wrestling Center) and the addition of fan screens like in the ThunderDome just didn’t work in this venue. It was distracting and getting used to it had to happen during this bout.

The other thing is that personally, I like but don’t love either of these guys. Johnny Gargano is very talented, but he’s been pretty consistently around in NXT for a long time and has become overexposed in that sense. Meanwhile, Priest took time to grown on me (which he has), but he’s still not a fave. So mixing these guys together was something I figured would be good but not something I was overtly looking forward to.

The match was in fact very good and drew me in at the end with a couple strong drama spots. It was a sharp match where Gargano went underhanded enough (tossing security guards in front of Damian’s dive which led to a low blow) to even the score given the size differential. So they did their job.

The intent of this match was likely to give Priest a win over one of NXT’s established guys. But it’s not like Gargano has had any long title reign or has been booked super strong lately. So this win over someone established didn’t help elevate Priest as much as they were probably helping. As I speculated before, if Johnny is on his way to Raw or SmackDown, this was putting over a rising talent on the way out.

This is a match that’d likely receive pretty universal praise if it weren’t for the out of ring accusations of Velveteen Dream.

Because of those #SpeakingOut accusations, there are always going to be fans who don’t want to see him at all or can’t fully enjoy his matches. Certainly not everyone. Some people can just watch a match not think of those things. Everyone is different. But that shadow still hangs over Dream.

This was a very bout and in general, I was able to enjoy it, though probably would have enjoyed it more if Dream didn’t come with such baggage now.

Kushida’s new aggression has been incredible for him. Velveteen Dream came down in a bit of a Doc Brown cosplay, mocking Kushy’s Marty McFly get up. He didn’t expect to be ambushed by a Kushida who’s aggression he awoke. Everything that happened here is his own fault.

The Japanese star mixing that aggression with his technical savvy is a an excellent combination. Meanwhile, Velveteen is playing the heel role differently from his initial heel run. He’s more vicious and more cunning. The two different character made for a mix in this bout.

Kushida absolutely needed to win this match. A loss in any fashion would cut the legs from the man after he just found a formula that is working better than before. He did win and rather dominantly. Then after the match, he beat the hell out of Dream more. That could be considered heelish, but again, this is all Velveteen’s doing. He asked for this by attacking Kushida months back. You reap what you sow.

It looks like they finally found what they need regarding Kushida. As for Dream, we’ll see how they handle him from here.

This was what you’d expect from a cruiserweight title match. Nonstop action, high risk moves, and some extra kickouts.

El Legado del Fantasma inevitably got involved, but Ashante “Thee” Adonis aided Swerve. I don’t recall a history established between the two. And the last time we saw Adonis, he was losing to Velveteen Dream so there’s no known animosity between him and Legado. It was all random.

At the same time, the Cruiserweight division needs more players on Wednesday night so if this is how they get here, it’s a net positive.

The ending involved Swerve hitting his head on what the announcers referred to as an exposed turnbuckle, but the exposure wasn’t clear and definitely wasn’t well set up. Still, didn’t take away from the main draw of these matches and that’s the high octane pace.

This was a solid show with a strong main event. Outside the ending of the women’s bout getting a bit too ridiculous, the matches were good.

The new Capitol Wrestling Center was a mixed bag. The general look was strong with the fencing in front of the plexiglass pods. It would help not to have fans in front of the hardcam that routinely pulled down their masks to shout things though.

The remote fan screens did not work. The ThunderDome is set up specifically to display them in the large Amway Center. But placing them on the walls here just drew attention to how small the building is. They may be better suited to leave them black to give the illusion that the venue isn’t so small.