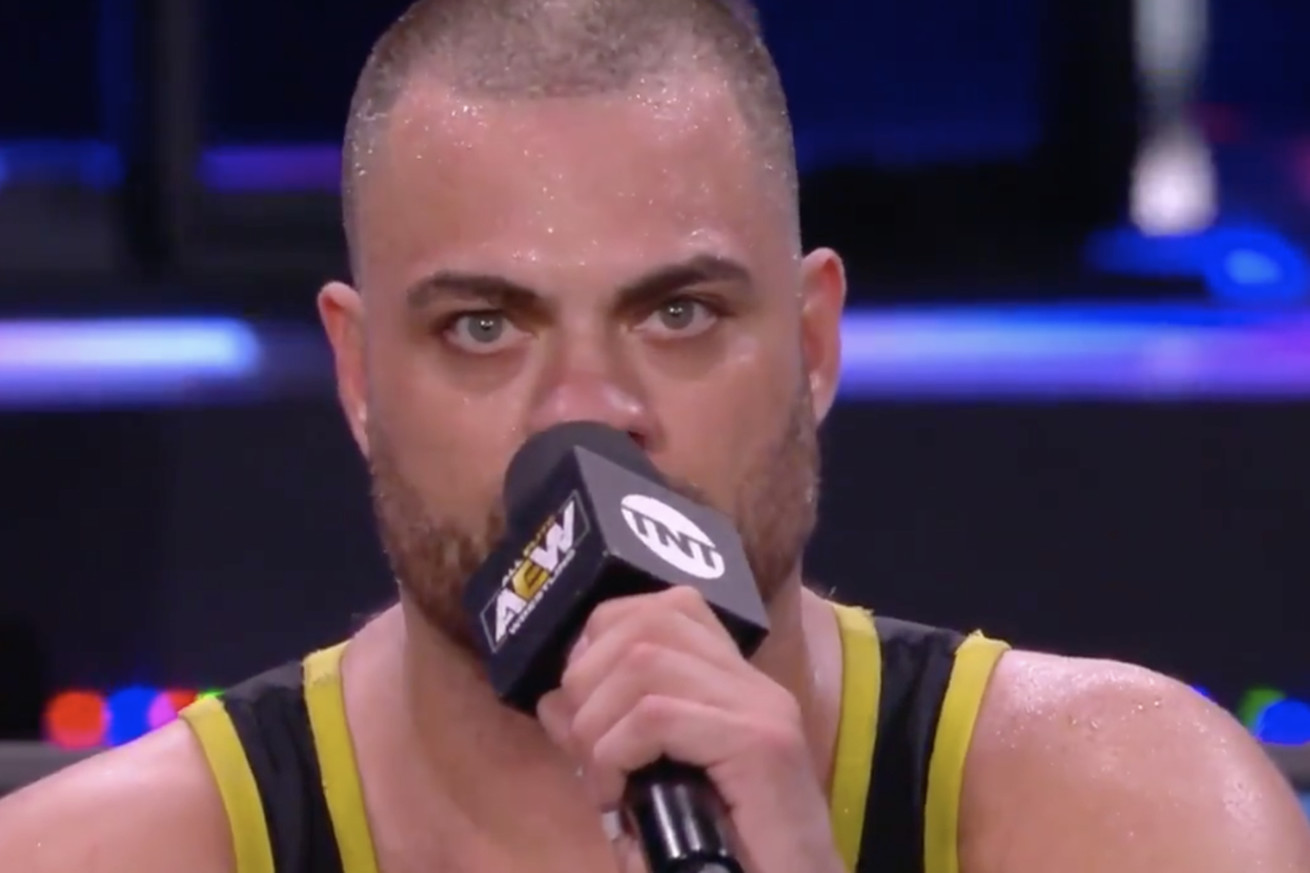 Here’s the lineup with ratings (watch, solid, okay, pass) on which matches are worth your time toward Dynamite:

The main event was the best of the bunch. Kingston’s match is worth watching to see a new submission folded into his AEW arsenal. His promo afterward for Moxley was the top moment of the show. The rest of the matches were all decent enough. Anna Jay made an appearance after Brandi’s bout. Hobbs’ power game is always cool. Same for Angelico’s ground game. Sydal and Nakazawa had an amusing comedy contest for fans of Being the Elite.

Excalibur teamed with Taz to call the action. Justin Roberts was the ring announcer. Shirtless Ricky Starks was back at the table for the fourth week in a row. He stayed for the first four matches.

Dustin Rhodes was ringside. Brandi handled her sturdy opponent with a bulldog, stunner, and pump kick. After the match, Anna Jay attacked. Red Velvet ran down to make the save.

Jungle Boy and Luchasaurus represented Jurassic Express. Marko Stunt was ringside. The highlight for me was seeing the two tall men go it. There aren’t many people in AEW taller than the dinosaur. Watts and Luchasaurus didn’t get too crazy, but it’s a singles match I’d be interested in. Watts got the better of their exchanges. Rosas almost picked up the win with a flying elbow drop. In the end, Jungle Boy took out Watts with a suicide dive then sprinted back into the ring to assist on a teamwork cutter to put Rosas away.

Bowens has a nice body build for an enhancement player, although, he did go a little too much on the baby oil. Bowens rolled with an offensive flurry to pin Serpentico, but Luther broke the count. Serpentico took out Johnson with a standing sliced bread. Chaos Project worked over Bowens and ended it with a teamwork flying double knees attack.

Will Hobbs vs Ryzin

Hobbs powerhoused through Ryzin with a vertical suplex, front suplex, and shoulder tackle. Hobbs caught a leaping Ryzin for a powerslam and finished it with a big spinebuster.

I see @TrueWillieHobbs handing out spinebusters, I make gifs of ’em. That’s how it works! #AEWDark

Eddie Kingston had words for Joey Janela and Sonny Kiss. There are levels to this game. Janela and Kiss are clowns. The Lucha Bros are top level.

Evil Uno coached Silver, while Dustin was by QT’s side. QT was in strong control until Uno grabbed his boot. Silver pounced to gain momentum. QT clawed back with a superplex, flying elbow, and tilt-a-whirl slam. Silver rebounded with a German suplex, head kick, and lungblower. Uno caused a distraction one too many times, so Dustin punched him. That allowed Dark Order interference as the referee lost focus. Stu Grayson ran in but was tossed out by QT. 5 and 10 were next in, but both ate cutters. In the end, Silver was able to capitalize with a spinning airplane slam to steal the win.

Bononi was fierce with power. The Blondes neutralized the big man by tossing Ali into him. Garrison planted Ali, and Pillman dropkicked Bononi off the apron. The Blondes set up a flying clothesline into powerbomb combo for their first victory in AEW.

Matt Sydal’s debut at All Out didn’t go how he wanted. He slipped on a shooting star press and nearly died due to Michael Nakazawa’s malicious baby oil. Sydal plans to end Nak’s career.

DARK [email protected] finally gets his revenge on @MichaelNakazawa for what he did at All Out!

This grudge match was set up through Being the Elite creatively rewriting history of a botch when Nakazawa tried to screw Sydal on purpose by oiling the ropes. Before the bell of this bout, Nak squirted his Turkish liquid onto the turnbuckle behind the referee’s back. Sydal quickly knocked out Nak with a question mark kick. He noticed the greasy pad, so he wiped it down with a towel. Nak recovered to spray baby oil in Sydal’s face. Nak hit a driving slam then did his underwear claw. Sydal countered with a leg sweep into a crossface leg catcher. Nak tapped out.

Kingston laid in heavy chops. M’Badu returned fire with a running corner splash. Kingston retaliated with an eye rake, but he ran the ropes right into a powerslam. Kingston remained tough and delivered a knee to the gut then a brutal spinning backfist.

Kingston pulled up M’Badu on the pin to apply more pain from a kimura. M’Badu submitted.

After the match, Kingston grabbed the mic to send a message to Jon Moxley. He will use that kimura lock to make Mox scream, “I quit!” He plans to mess up Moxley and have fun doing it.

Janela and Kiss aren’t scared of the Lucha Bros. They want to use a win over them to climb the rankings.

DARK [email protected] & @JANELABABY never back down from a fight!
This Tuesday on Dark, Kiss & Janela are focused and prepared.

Jack Evans was ringside. Angelico used his submission skills to wear down Dean.

Dean blasted Angelico with clotheslines and a German suplex. Dean tried to finish it, but Angelico escaped a double underhook to transition for a wrenching leglock to win.

Eddie Kingston was ringside drinking coffee. The party guys launched for a double side dive.

Fenix returned the favor with a tope con hilo.

[email protected] takes flight and @MadKing1981 loves every second of it! #AEWDark

This was a competitive contest that almost came to an end on a 450 splash from Kiss.

Fenix broke up the pin. Janela ran into a rolling cutter from Fenix, and Pentagon superkicked Kiss. The Lucha Bros won via butt-stomping package piledriver.

All it took was a submission win and a two-minute promo for Eddie Kingston to sell me on a rematch against Jon Moxley. I love the direction of it being, “I quit.” I think there is little doubt that Moxley will win. I’m more interested in seeing how far the champ has to go to make Kingston quit. Their eventual fight should be bonkers.

The promos from Kingston and Joey Janela & Sonny Kiss did a good job of building desire to see an otherwise inconsequential tag match in the main event. That made all the difference. Likewise for Matt Sydal’s promo. I’d have forgotten about Michael Nakazawa’s deviant behavior. Their match was goofy, but the intensity from Sydal made it interesting.

Big Swole shined in victory. Her finishing train of maneuvers was aggressive. I’m pleased that Red Velvet appears to be moving on up. She earned her time with solid efforts in defeat.

Share your thoughts on Dark. Who stood out most for episode 55?