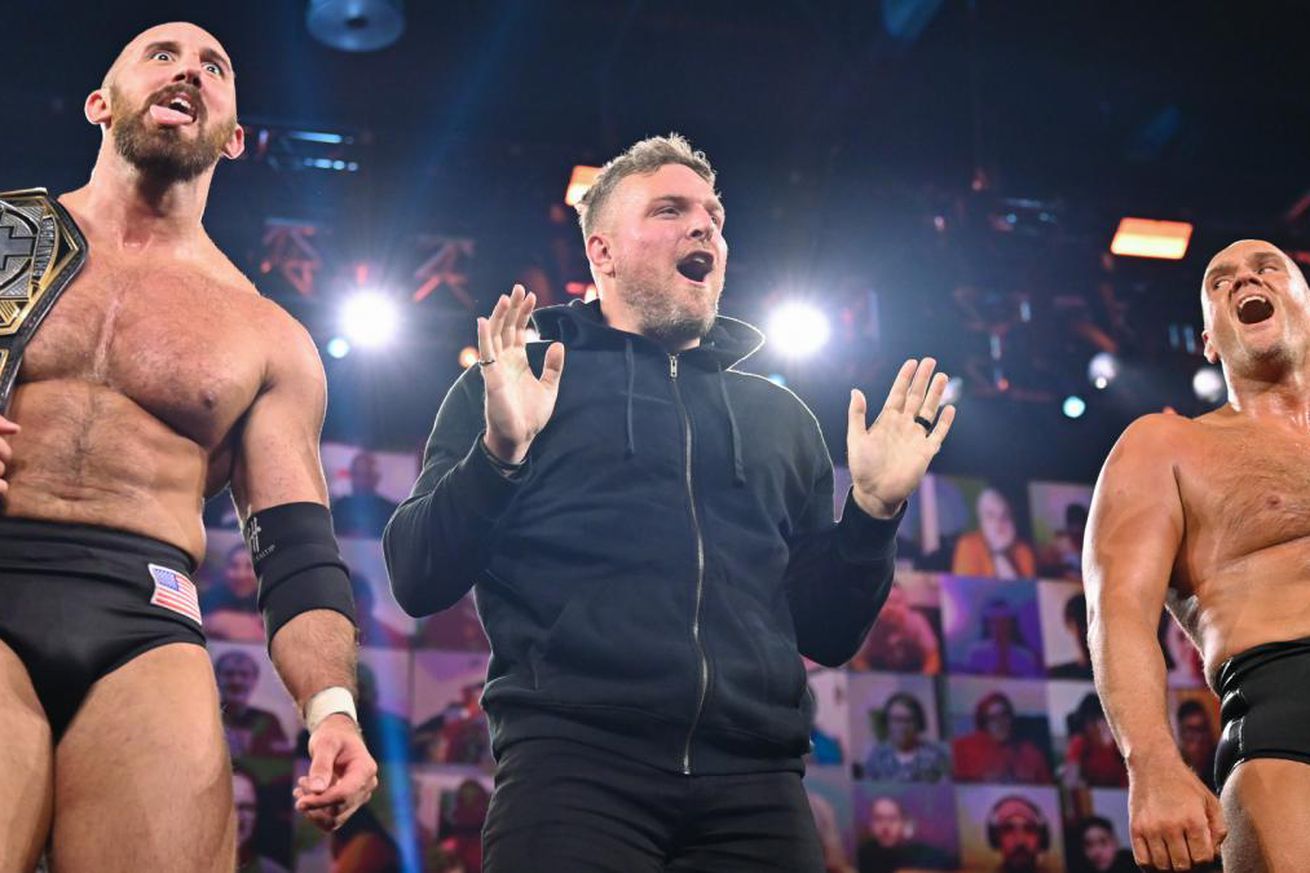 NXT returned last night (Oct. 21) from the Capitol Wrestling Center in Orlando, Florida. You can find the results at the live blog here.

NXT’s ‘Who dunnit?’ angle had a big reveal this week, but hopefully, it wasn’t the final reveal.

It felt like this part of the angle was rushed. Perhaps because a major player in the story got hurt when Ridge Holland suffered his unfortunate injury. Perhaps it was the plan all along. Whichever it is, at the end of this week’s episode, good ol’ Pat McAfee revealed himself to be at least involved in, if not completely behind, the destruction of the Undisputed ERA.

Throughout the episode this week, they advertised the main event as the Undisputed ERA vs. Breezango for the latter’s tag team gold. But throughout the night, members of Undisputed were found attacked backstage. First Bobby Fish and then Roderick Strong. Kyle O’Reilly avoided the fate, but he opted not to pick a new tag partner and instead traveled to the hospital with his boys.

This allowed Oney Lorcan & Danny Burch to step in and challenge Breezango instead. William Regal made this call because they were on the scene (convenient) and were the team Undisputed defeated to become #1 contenders.

It was during the main event that Lorcan & Burch were revealed as part of the conspiracy. They won the match with the help of McAfee (who was then masked) and a low blow, winning gold for the first time in NXT. After the match, McAfee made his official reveal.

It’s a good angle as long as it’s not the end of the it. I love the Brit-Am Brawlers a bunch and Pat McAfee really wowed me when he feuded with Adam Cole, but if this is all his brain child, that would be underwhelming. Because he still feels like a celebrity guest and not threatening enough to be a big bad.

I think there’s still a member of Undisputed ERA that’s behind all of this. And it’s either Kyle or Cole. So there’s likely more ‘who dunnit’ afoot. That’s great because speculating on mystery angles like these are always a blast. So let’s do that a bit.

Kyle O’Reilly makes the most sense. When he returned to NXT months back, it looked like he was shooting some nasty looks towards Cole. Adam’s feud with McAfee cost Kyle and Bobby the tag titles. If KOR was tired of Cole’s BS, maybe he would enlist the services of the man who was able to get under the Panama City Playboy’s skin. This would also allow Kyle to play the heel and Adam the babyface, which I think are the roles best suited for them in this angle.

Adam Cole would take more work to explain. He technically wasn’t in the building this week, delivering a promo via video. That could be misdirection. But the motive isn’t there. Why would he attack the guys who have had his back for so long? Why would he team with a man who demeaned him and antagonized him like McAfee? It would take more effort for them to sell it, but it’s still an option.

Of course it could just be McAfee. Or another major player. Maybe Wade Barrett is creating a new Corre.

We should get more answers in the next few weeks. This could be a great angle, as long as tonight’s reveal wasn’t the end of it.

The opening bout this week was a triple threat between Kushida, Velveteen Dream, and Tommaso Ciampa.

It was high octane, a match that never stopped for air. And while sometimes those matches are too much (some just need to breathe a little), this one was entertaining throughout.

All three men are strong in their roles. Kushida has been absolutely killing it since he’s gotten more aggressive with his character. He’s still technically savvy but now he’s angry about it. Tommaso Ciampa has mastered this version of him ages ago. And while I definitely understand people who have no interest in seeing Velveteen Dream on their TV, I think he’s doing very well with this heel version of him. It what was needed after failing to win the big one as a babyface. Unfortunately, a character change that would normally have fans hoping to see more of him can only do so much given the accusations against him.

Kushida pinned Ciampa in the end after Tommaso was clocked by the cast on Velveteen’s arm, the arm that Kushy injured. It protects Ciampa a bit while allowing the right man to win. Because while Kushida is on a hot run, he needs to keep winning to build that credibility. If a new character loses too much, that character is dead in the water.

Now Kushida is in the position where he could soon enter a title picture, even the top men’s title. It would just take a couple more big wins to get there.

Ember Moon had her first singles match since returning from her Achilles injury.

She faced off against Jessi Kamea, and Jessi got a bit of a chance to shine before taking the inevitable loss. Moon looked good. It’s almost amazing how little ring rust she seems to have after missing so much time.

Moon debuted a submission finish, which will allow her some variability in the finishes of her matches. It’ll also preserve her tailbone because that stunner from the top rope can’t be great for it. Also, submissions are just badass.

The post match angle involved Dakota Kai attacking Moon. This is a good program for Ember’s return feud. Kai is a good heel but not someone who is too high up that she can’t take this loss. We have to assume the top of the division is Io Shirai, Rhea Ripley, Ember Moon, and Toni Storm. It makes sense for Ember to feud with an established talent like Dakota while staying away from the four pillars of the new division for now.

This was after he lost twice in a row to Big Thicc Bronson Reed. The first time was just the scheduled match. The second time was after he demanded a rematch and lost in a matter of seconds. He’s not the brightest.

The cameras caught up to him walking to his car after all this. There he told them that he’s done. He quits NXT.

This is the logical next step to this story. He hasn’t won anything worth noting since returning from a failed main roster run. For a man who is so damn cocky and full of himself, losing like this is going to push him over edge. And since he’s young and brash, instead of working on the issue, lashing out and quitting is more likely.

We’ll see where they take that. He’ll be back with a new attitude or a manager or some manner of change.

– El Legado del Fantasma’s feud with Swerve Scott and friends feels like a never ending one. My man Sean Rueter even compared it to the Hurt Business vs. Apollo Crews and friend on Raw, which felt like an apt comparison given constant rematches with little story advancement. This week, Legado faced and defeated Scott, Jake Atlas, and Ashante “Thee” Adonis. However, Atlas laid out Cruiserweight champion Santos Escobar during the match, setting him up as Escobar’s next challenger.

– Timothy Thatcher’s lessons were in the CWC this week. This was to see his student stand up to him when Thatcher took the demonstration too far and wouldn’t release a submission. It turned into an impromptu match between Tim and Andrew (or was it Anthony?) that Thatcher won with ease. One of these weeks, the student will hold his own against Thatcher, serving as a debut, or someone will come to the ring and challenge the Catch Wrestler.

– Johnny Gargano and Candice LeRae had a very entertaining bit where they practiced spinning a wheel in preparation for Halloween Havoc next week. Gargano, who apparently has a known hatred of wheels (hating one of the first inventions ever is something else), kept spinning matches like Buried Alive or Casket Match. He’s not going to have a good week next week.

– Drake Maverick earned just a little more respect from Killian Dain when he unloaded on Ever-Rise with a chair. That’s the type of action that the Beast of Belfast can get behind, even if it does result in a DQ loss. He’s still not feeling that music though.

– Xia Li still can’t pick up a win, this week losing to Kacy Catanzaro. And like usual, she lashes out afterwards. Afterwards, Raquel González appeared to wreck all the women involved ahead of next week’s match against Rhea Ripley, reminding us that this Xia story is still a low card angle.

This was another solid week. The McAfee reveal didn’t leave me stunned as much as it did leave me hoping there’s more to it, but it could be a good part to a bigger story. The triple threat was very good and the rise of Kushida has been great. The show is still lacking from not having its top men’s title represented since TakeOver.

I’d also like to comment on the new presentation now that they’re in the Capitol Wrestling Center. I still feel the video screens don’t fit the vibe (especially now that we know those aren’t people watching live) and now they’re adding in fake crowd noise that can be really distracting when you notice it. There’s a crowd there. Just depend on them for the noise.