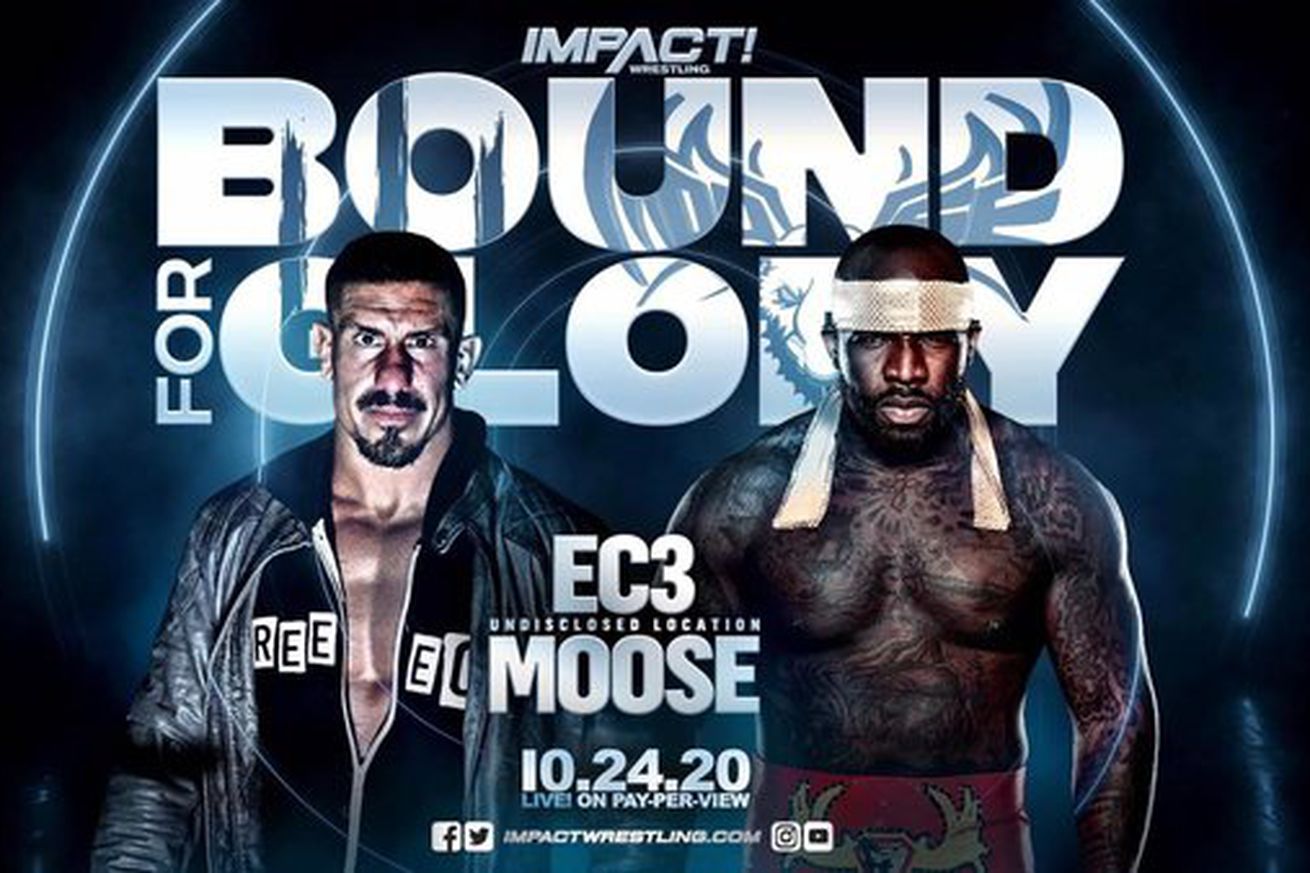 Get your dancing shoes ready, or the slipper equivalent for lounging to watch a wrestling PPV. Impact is bringing Bound for Glory to your screens tonight. Rich Swann will have his chance at both revenge and the world title, EC3 will attempt to control his narrative in a cinematic fight, and Heath will have his last chance to earn an Impact contract.

Bound for Glory is available on PPV and Fite TV. The show begins at 8 pm ET.

Let’s run down the storylines with predictions for each contest to get you prepared for the evening.

Eric Young is a maniac. His noggin isn’t quite cogging with proper rotation. He seems to have had the idea that winning the Impact World Championship was inevitable. The problem is that he has been ruthless to anyone standing in his way.

Young was eliminated in a multi-man championship contest by Rich Swann at Slammiversary, so he injured Swann. The damage was so bad that Swann was going to retire. Young ended up winning the top belt from Eddie Edwards down the line, and he still decided to injure the former champ after the match. Now, Young plans to increase his violence for Swann trying to get in the way of his destiny as champ.

Swann proved to be an exceptional athlete and recovered in rehab faster than a mere mortal. He will be out for vengeance against Young. Expect intensity and booty kicking.

Prediction: Swann is bound for glory. This feud has been brewing for awhile. Impact built up Young as a very bad man while also building up Swann as a sympathetic hero. All the pieces are in place for an iconic moment to close the show.

Kylie Rae won her #1 contender spot in a Knockouts gauntlet at Slammiversary. Deonna Purrazzo continually tried to get under her skin, but smiley Kylie kept her polite demeanor. That was until Purrazzo broke Susie’s arm. Now, Kylie has a mean streak.

Prediction: Purrazzo snaps Rae’s arm in victory. The big question is if the champ can use Rae’s newfound rage to her benefit. Mistakes happen when fighting in anger, and I think that’s where Purrazzo will prevail.

The Motor City Machine Guns made a surprise return at Slammiversary. A few nights later, they won gold by dethroning The North, who were tag champs for over one year. The Good Brothers also returned at Slammiversary, and it is time to back up their talk of being the best. Ace Austin & Madman Fulton are there, because they have issues with everyone else.

The biggest moment in this build-up was on the go-home show when Karl Anderson and Luke Gallows suckered in Alex Shelley and Chris Sabin for a cheap shot attack.

Prediction: Good Brothers. They were big free agent signings, and it is time to prove their value. The biggest wrinkle in their plans will be the speed of MCMG. The quick strike style of Shelley and Sabin could position them to steal the win in a chaotic bout.

Rohit Raju has been a weasel as X-Division champ. A very smart weasel, but a weasel nonetheless. He figured out ways to have Chris Bey, Trey Miguel, and TJP knock each other off in a series of matches. That culminated in a three-way with an instant title opportunity. Rohit swooped in on a tired Trey for a quick defense.

Rohit then started an open challenge. He retained against Mack via intentional count-out. Jordynne Grace was next and won, but Rohit claimed it was not a title bout. EVP Scott D’Amore was impressed by Rohit giving out opportunities, so he booked the six-way scramble.

Prediction: TJP. I’m rooting for Rohit to retain, but that would kind of clean out the entire division. So, I’m taking TJP instead. His unique set of skills are fun to watch.

EC3 vs Moose at an undisclosed location

EC3 returned to Impact to control his narrative by destroying his past. That’s where Moose came in. The big man was prancing around town as the self-proclaimed TNA Heavyweight Champion. EC3 stole the belt and forced Moose to evolve into a worthy adversary, which happened when Moose pounded EC3 to a bloody pulp on a bridge. EC3 exposed his master plan of luring Moose into his narrative to fight at an undisclosed location.

EC3 has been mostly words and mind games up until this point. With Moose primed to punish, EC3 will be forced into physicality. EC3 wants to defeat peak Moose so that the act of destroying the TNA title will possess cathartic value through being earned. This has strong potential to be a show-stealing effort in cinematic style.

Prediction: EC3 conquers his past as part of a larger narrative. EC3 hasn’t been shy about expressing his desire to compete in different promotions. After his debut promo in ROH, it is making me believe that this fight with Moose is the first step in his evolution to a higher plane. I also predict that Moose will go out on his shield and level up as well for his Impact future.

Sami Callihan has managed to convince Ken Shamrock that he needs to get his edge back by exploding with rage as The World’s Most Dangerous Man. Shamrock decided, or was coaxed, to focus on Eddie Edwards. Two surprise attacks later, and the match was made.

Prediction: Edwards wins via disqualification. I think Shamrock will snap too hard and go overboard with violence against the referee’s orders.

Twenty wrestlers will compete to earn a title shot at any title they want. The intrigue revolves around Heath and Rhino. Heath kept showing up at Impact to make an impression. It eventually worked, but the resulting contract negotiations exploded. Heath blamed Rhino for giving advice to pass on the WWE and come to Impact instead.

Rhino proved to be a good friend and is sacrificing his Impact career to get Heath one more contract opportunity. If Heath or Rhino win, then Heath gets his big money contract. If they don’t win, then Heath is gone for good, and Rhino’s contract will be torn up as well. The wager on Rhino’s future is unbeknownst to Heath.

The announced participants include Rhino at #1, Hernandez at #20, Heath, Tommy Dreamer, Brian Myers, Cody Deaner, Cousin Jake, Johnny Swinger, Alisha Edwards, Tenille Dashwood, Taya, plus nine more. There has been no tease of a major surprise, but you never know.

As for the other spots, I think Havok, Fallah Bahh, Acey Romero, and Larry D are likely as hosses. Every over-the-top elimination bout needs big bodies. The rest could be filled out with names like Rosemary, Crazzy Steve, Nevaeh, Kiera Hogan, Tasha Steelz, Kaleb Konley, and Sami Callihan.

Prediction: Heath finally gets signed. I’ll admit that I want to see the happy ending here. The story with Heath was been executed well enough to make me root for his success. It could actually become a tear-jerking moment if he celebrates with his kids. Sami Callihan would be my swerve pick.

The pre-show will feature the Rascalz versus the Deaners and Ken Shamrock’s Hall of Fame induction. The Rock may be taking care of the video greeting for Shamrock. The festivities air at 7 pm ET on AXS and other digital platforms.

Check back with Cageside Seats for live results. Bound for Glory begins at 8 pm ET on PPV and Fite TV. Until then, let us know your predictions.