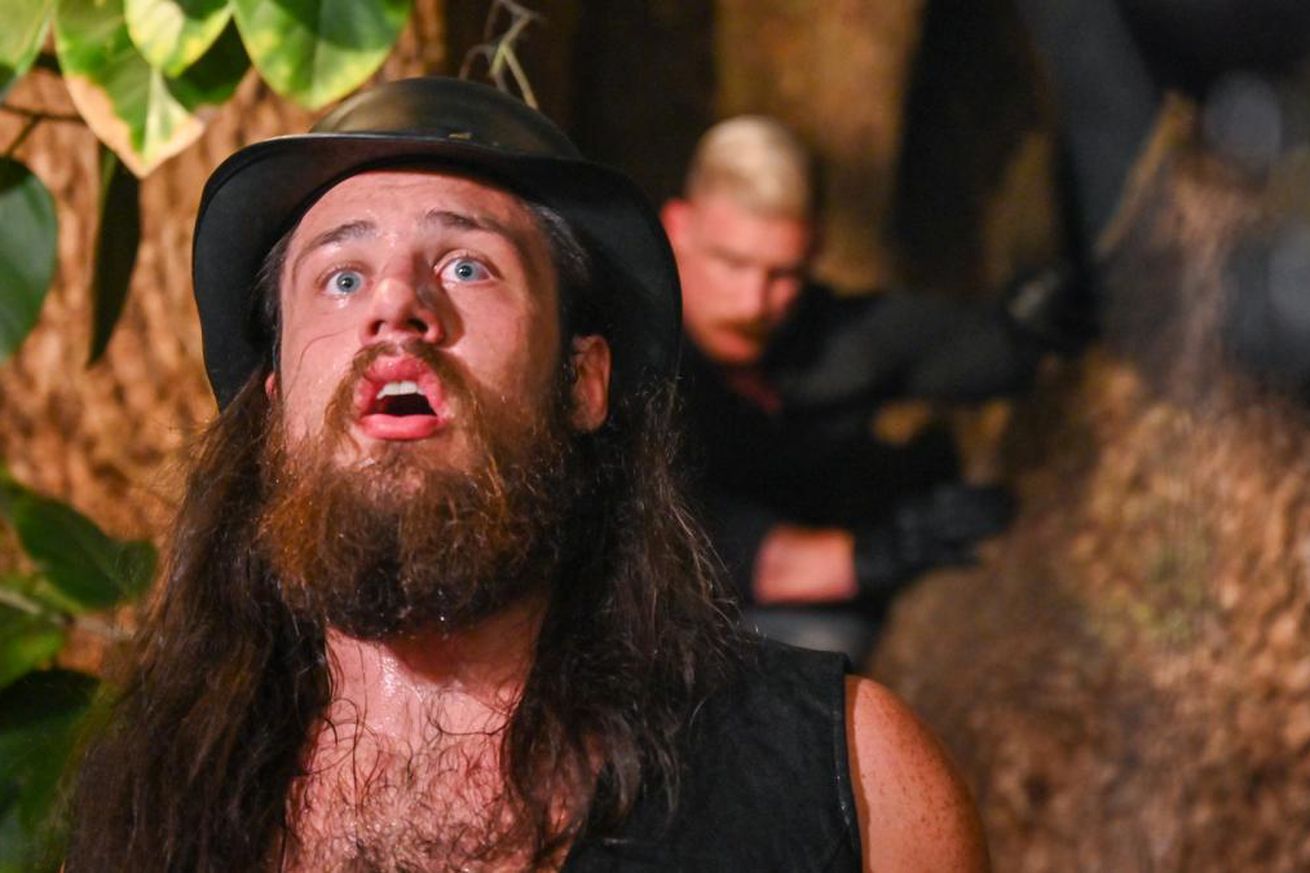 NXT returned last night (Oct. 28) from the Capitol Wrestling Center (CWC) in Orlando, Florida with their Halloween Havoc special. You can find the results at the live blog here.

Who is that Masked Man?

Johnny Gargano picked up what has to be considered an upset win over Damian Priest.

They opened the show with the first of the wheel matches. It landed on “Devil’s Playground” which the announcers described as Falls Count Anywhere, No Count out, No DQ, Anything Goes. That’s super redundant. A Falls Count Anywhere match is all those things. But of course, that doesn’t have a spooky Halloween Theme. Which is fine. But it’s a reminder that there are so many names for the same stipulations in wrestling.

It was a fun match, fighting through the array of impressive Halloween decorations. They made full use of the stipulation, moving all around the CWC.

The match ended up on a platform that housed a second wheel, putting Johnny next to his sworn enemy (a wheel) for the closing moments of the match. Gargano held his own by unleashing a barrage onto Priest using a garbage can, but the champ fought back and appeared to have this locked up with the Reckoning.

But before he could deliver the move, a mystery individual in a Scream mask (maybe weird principal Henry Winkler?) attacked Priest with a pipe. Johnny delivered a Hurricane DDT using the wheel (take that, wheel!), and then hit the champ over the head with a tombstone that the person in the Scream mask (maybe known wrestler David Arquette who was in Scream?) handed him. This knocked Priest off the ledge and allowed the challenger to cover for the pin.

The masked individual came to play later in the night during Candice LeRae’s match. Indi Hartwell, who’s been helping the Garganos, was nowhere to be seen so maybe it’s her. There’s been speculation that Austin Theory, who “quit” last week, is helping the couple. I’m still holding out hope for David Arquette, mainly because that’d be crazy.

Candice LeRae was not as lucky as her husband this week.

Before I even jump into this main event, I’d like to acknowledge how smart they laid this episode out. I never expected either Johnny or Candice to win. But by leading off with the surprise Gargano victory, it set the stage for a possible LeRae victory later in the night. It was suddenly entirely possible that they’d book the Garganos as champions. So when Io Shirai climbed the ladder in this Tables, Ladders, and Scares match and retained her title, it was no longer the obvious outcome. It put the drama back into this match.

As mentioned, the wheel landed on a Tables, Ladders, and Scares match (a TLC with some body parts to add in the scares). The two women had themselves a really fun match with the stipulation, with some big spots, such as a swinging neck break through tables or Candice taking a big spill from the ladder in the ring through a ladder set up between the ring apron and announce table. (She broke that fall with her knee so… ouch.)

The masked individual from Johnny’s match attempted to help LeRae and would have gotten away with it too if it weren’t for that damn Shotzi Blackheart. Shotzi neutralized the mystery person and this allowed Io Shirai to knock over the ladder that Candice was standing on, sending the challenger to the floor. All that was left was climbing up and claiming her gold.

While I would have enjoyed the Gargano Way holding both titles, I am glad Io is still champion. She’s been fantastic in the role. They’ve figured out the way to present her, using video promos that capture her cool vibe and of course superb matches all the time. With women like Rhea Ripley, Ember Moon, and Toni Storm waiting in the wings for a title shot, the future continues to look bright.

Pat McAfee has a pretty rad stable going on.

The former punter, with tag champions Oney Lorcan & Danny Burch at his side, delivered a detailed explanation of his plot to get revenge on Adam Cole. It was pretty much the same explanation he delivered on Twitter, but they needed to do it here too. They can’t depend on people following an explanation on Twitter. If anything, he shouldn’t have given so much away on the social media.

But that’s OK either way because this segment added way more to this angle.

Kyle O’Reilly came out alone, looking to take on all three men. But soon he had help in a returning Pete Dunne, who walked out with two chairs to help KOR take down Pat and co.

This never sat right. What problem did Pete have with McAfee or the tag champs? Of course this didn’t make sense. Because the Bruiserweight was actually aligned with them. (This makes more sense as Undisputed has antagonized Dunne for ages.)

He attacked O’Reilly with the chair and then the four of them beat down the last standing member of Undisputed.

This pretty much kills my “Kyle O’Reilly is really behind this” theory. Because my man took a beating this week. Now maybe he’s a disciple of the Eric Bischoff commitment to the long con, willing to take beatings to get people off your scent. But more likely they’re setting up a babyface Undisputed against McAfee’s posse.

This would normally be the time of the year for WarGames, but we haven’t heard anything about that. They wouldn’t be able to do it in the small Capitol Wrestling Center, but they could run it in Amyway or wherever they find next if that’s what they’re planning.

The Haunted House of Terror match was wild.

Much like the House of Horrors match that they probably didn’t want to name it after because of the bad connotation associated with that match, this started off site as a cinematic and ended up in the CWC.

This type of match isn’t for everyone. Some people like campy and sometimes supernatural in their wrestling. Others like a more realistic vibe. Personally, if done well enough, I enjoy myself some stupid and some outrageous.

The first segment was up my alley, a lot of it because of how damn good Cameron Grimes is. He found his NXT personality and it is excellent. The dude did not shut up while walking through the house, somehow so obnoxious that person who’s alone in a haunted house was still the villain. He really had me laughing when he walked into the bathroom with a woman showering and started undressing to join what was obviously a zombie. “I’m feeling a bit Grimey” was an all time douchey line.

All the actual haunted house stuff I enjoyed. The fellow wrestling zombies and referee. Lumis stalking him from all angles. Just some real campy goodness.

I didn’t feel exactly the same when the match returned to the CWC. The nice thing about a cinematic is it’s separate from the world within the arena. The arena is for more real matches like Rhea vs. Raquel. So bringing all the zombies back from the house to continue to torment Grimes was a little tougher to swallow.

That being said, the entire night had an extra layer of camp that went along with the spirit of the corny WCW Halloween Havoc’s and the campiness of horror movies in general. In that sense, I give it a pretty easy pass than I would if this were a normal night.

In the end, this was fun and allowed both men to continue to excel at their characters. Lumis has his stalker character down while Grimes plays an incredible overly arrogant heel. And both are still midcard enough that this won’t hurt anything they’re planning for either in the future.

While I wouldn’t want to see more zombies in the CWC, for one night only on Halloween, it was a fun time.

Coming into Halloween Havoc, the match I anticipated the most was the one between Rhea Ripley and Raquel González. They had done such a great job building this match, slowly teasing the issues between the two big women of NXT but never going one on one until this week.

Right off the bat, they bring the power game. And the match remained a slugfest between two powerhouses the entire time. That’s what we tuned into see. Not trading highflying moves or long submissions. (We saw a little of both but this was a hoss fight.) It was billed as a brawl and that’s what we got.

This did a fantastic job building Raquel. She went from Dakota Kai’s heavy to a big player in the women’s division in no time, and this match did its part in establishing her. Rhea Ripley sold the hell out of González’s power, not just taking the moves but with her facial expressions when should couldn’t over power her opponent like she is so accustomed to.

Rhea was able to gut out the win, but this was a win for González too. Ripley can move up, even to a title match. But González is going to be a force in the women’s division.

– Santos Escobar defeated Jake Atlas in a non-title match. But it wasn’t a clean win. Atlas took a headbutt on the outside of the ring from Raul Mendoza who was wearing the loaded luchador mask. It was a good bit of heeling that really had me feeling “Man, that wasn’t fair” when it was over. We’ll see if Jake is able to get his revenge.

Halloween Havoc was a really fun show. I appreciated the extra level of 80s corny with the vibe. Shotzi Blackheart delivered her lines like you would see if you combined metal and cheesy horror. The matches were all top notch, we have some intrigue in a new masked individual (c’mon, David Arquette!), and Pete Dunne returned to NXT’s hottest angle.