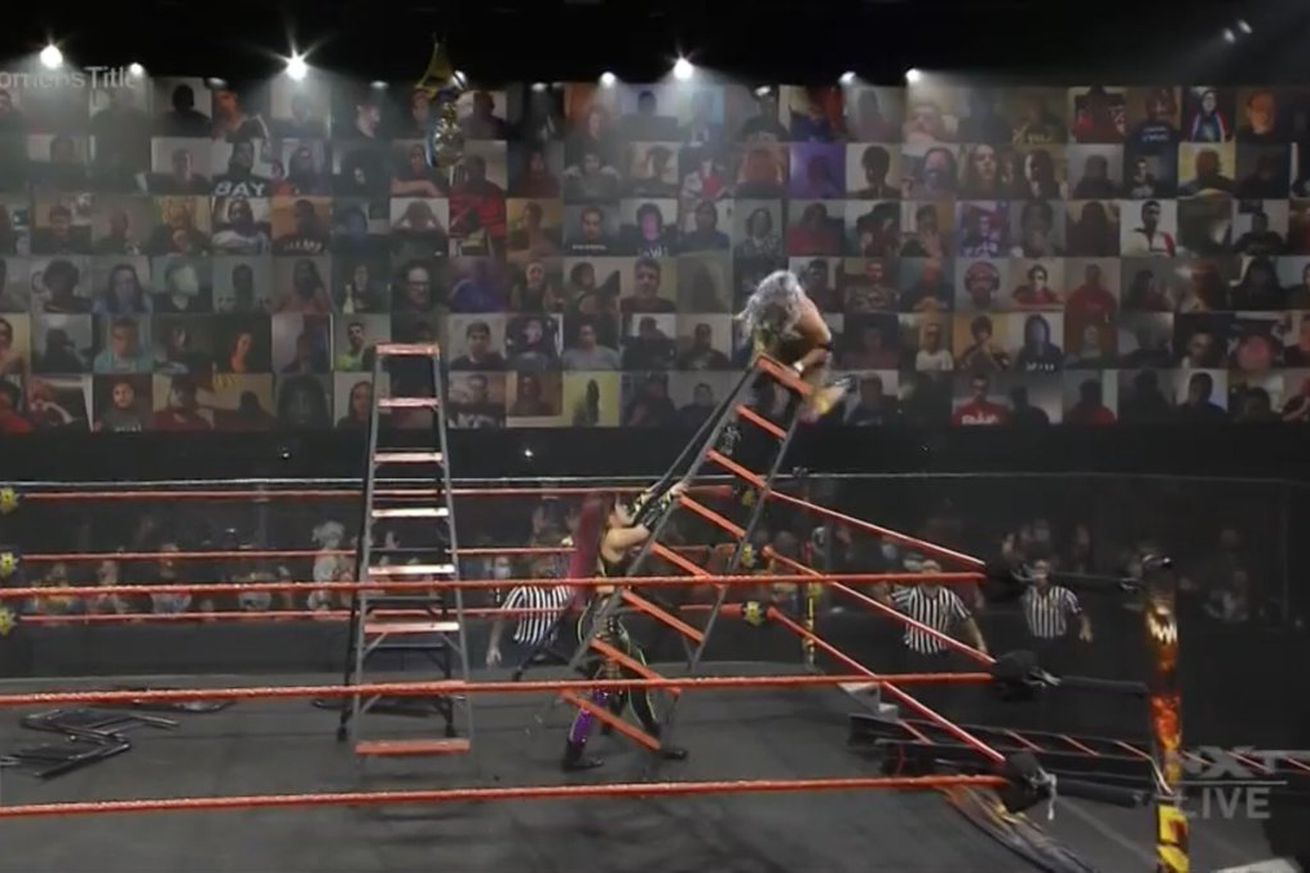 The NXT Women’s title got the main event spot on a stacked Halloween Havoc show on Oct. 28, and if that wasn’t enough to tell you it was a big deal, the brought Poppy in to sing champion Io Shirai to the ring.

What an entrance for @shirai_io! pic.twitter.com/3xKNHX8fan

This was a “Spin The Wheel. Make The Deal” match, so Shotzi Blackheart gave us a final spin of the night, landing on Tables, Ladders, and Scares.

Our first scare came from a bag of “body parts” on a table challenger Candice LeRae pulled from under the ring, but there were plenty throughout the 15+ minute match.

Scares came first, but tables, ladders, chairs, scares, and just about any painful thing you can think of came into play as the match took advantage of the overrun USA Network allowed WWE tonight.

We’re staying with this match as long as it goes LIVE on @USA_Network!

After the Poison Pixie was able to put her opponent through two tables they’d set up on the ramp side of the ring, a Scream-masked interloper (the same one who helped Johnny Gargano become North American champ in the show opener? We don’t know!) tried to literally carry Candice to the title, but Shotzi wasn’t going to let that happen.

In the inevitable battle atop the ladders, it initially looked like Candice would win. But the champ thought quick, and shoved over the one the challenger was on.

TABLES. AND LADDERS. AND SCARES. Oh [email protected] & @shirai_io put it all on the line at #WWENXT #HalloweenHavoc! pic.twitter.com/FbYNWsPHVK

LeRae landed knee first on a ladder which had been draped from the ring to the announce desk earlier, and there has to be some concerned she could be joining NXT’s long injury list after this spot.

We’ll hope for the best as wait for updates on that. For now, Io remains the champ, and one of the better protected champions in the company.

Halloween Havoc was a hell of a show, and between this and the Rhea Ripley & Raquel Gonzalez banger that came earlier in the nine o’clock hour, the women were definitely the most memorable part of it.

Check out anything you missed from the Oct. 28 NXT in our live blog here.