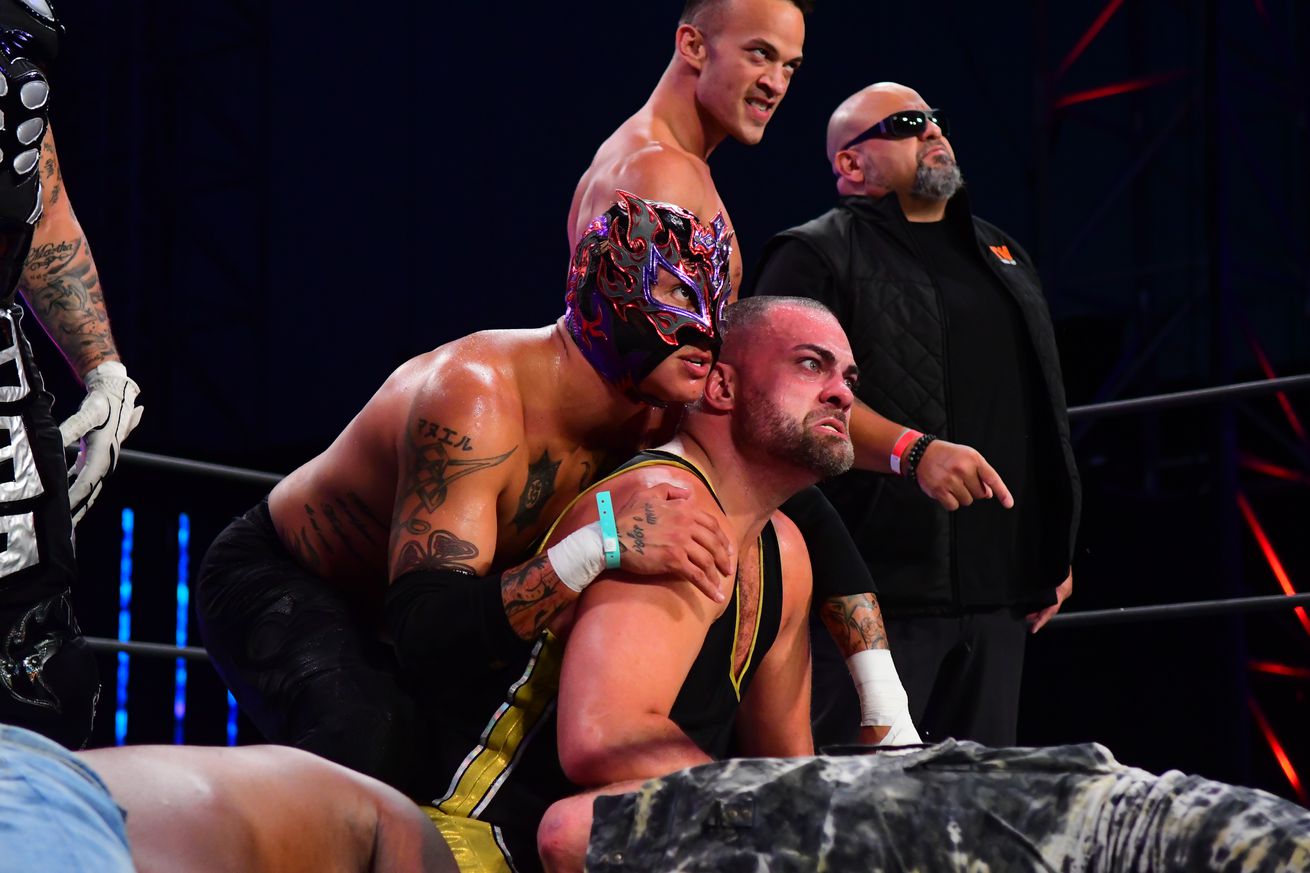 The big stories coming out of Dynamite (Sep. 23, 2020) were Jon Moxley defending the AEW World Championship against Eddie Kingston in a furious fight, the return of Cody Rhodes, and the Young Bucks continuing their tantrums of terror. The fallout includes Kingston not quitting, Cody and Brandi not backing down from Mr. Brodie Lee, as well as other goodies, such as Pentagon being the king of soccer-tennis.

Due to Lance Archer’s COVID positivity, Eddie Kingston was thrust into the limelight for a world title shot against Jon Moxley. Mox choked Kingston into unconsciousness. The champ retained, even though, the challenger never gave up. Referee Bryce Remsburg made the call to protect Kingston.

I’ve known you long enough to know I had to save you from yourself. Thanks to me, you’ll get to wrestle again.

Kingston would have rather died in the rind instead of lose his opportunity at gold.

That was a solid exchange to put over the value of AEW’s top belt as well as Kingston’s fighting spirit. I obviously don’t want Kingston to die in the ring, but I am curious how that sentiment could be further explored upon without death. For example, what would it take for Kingston to lose an I Quit match against Moxley for the AEW World Championship? If Archer is sidelined for longer than expected, then I’d like to find out an answer to that question on the October 14 episode of Dynamite.

The First Family of AEW is not scared of the Dark Order. Brandi Rhodes isn’t backing down from Mr. Brodie Lee’s criticism. Her thirst traps are open for business.

It is interesting to note that Cody’s red logo is being referred to as the Death of Cody for his new t-shirt.

What did you all think of that entrance?! Get your new Death of Cody shirt NOW! Only available for 24 hours on https://t.co/9hHlXpcSbp. Welcome back @CodyRhodes! #AEWDynamite pic.twitter.com/nBzKlgSNJO

Aside from newly dyed black hair, I’m curious to see how Cody has changed by his, “death.” Did his cockiness and arrogance die as well? Those are attributes that may have assisted in his downfall from the TNT throne.

As for a different attitude change, the Young Bucks have been quite rude lately, however, it might not actually be a heel turn. On the post-show, Tony Schiavone provided his opinion on whether the Bucks were acting the heel.

“No, I just think they are frustrated. You know how it to get frustrated, and you take out your frustration on inanimate objects like a phone. And I don’t get too pissed off about that.”

These post-shows are Schiavone’s takes and not necessarily the company line. He may or may not know the story that is to come. Either way, I think it is interesting that he isn’t framing the Jacksons as bad guys yet.

Thunder Rosa stood tall alongside Hikaru Shida after defeating Ivelisse and Diamante. That felt like the end of her short stint with AEW for now. After defending the NWA women’s title three times in six days, the champ is available if AEW wants more of La Mera Mera in October.

From a story perspective, I don’t think if there is much more AEW could do with Thunder Rosa while she is still under contract with the NWA. I assume she wouldn’t be taking any more losses to risk devaluing her status as NWA queen. I suppose Diamante could get a title shot. That would fit and also be a quality TV match. Penelope Ford would put up a feisty fight. Abadon would be intriguing. The question would then become how often AEW would be willing to put over a champion from a different company.

Here is the lineup for the next episode of Dark.

We have NINE stacked matches for you this Tuesday on Dark!
Watch #AEWDark at 7e/6c via our YouTube channel at https://t.co/oZiB2U1XM8 pic.twitter.com/kyrj4MLi9B

AEW should change the word order to say they have stacked nine matches instead of nine stacked matches.

We’ll wrap up with the astounding revelation that Pentagon is the king of soccer-tennis in AEW. This news came to light when Jack Evans issued a challenge to the skeleton ninja. Most of these videos are in Spanish. It began with Evans sending a message quoting Ezekiel 25:17 from the bible, also commonly known as the speech from Samuel Jackson in Pulp Fiction. Pentagon was not scared by Evans’ rookie skills.

Evans took it up a notch with bottle clanging reminiscent of The Warriors calling Pentagon to come out and play.

After a little bit of practice, some special shoes, and a pre-celebration funeral for Pentagon’s tyrannical reign as soccer-tennis king, it was game time.

…and so it begins… pic.twitter.com/WilesiopFS

Despite all of Evans boisterous claims, he was soundly defeated.

Final score: 10-2 Penta. You know soccer-tennis is a stupid game no one should take seriously.

Pentagon won several more games over Evans and also Angelico. That led to one final update.

Update: Penta 0 Valor is a prick.

This saga of soccer-tennis has concluded.

Would you like to see an I Quit match between Eddie Kingston and Jon Moxley? Do you classify the Young Bucks right now as babyfaces, tweeners, or heels? Aside from hair color, what other changes from Cody Rhodes would you like to see? How would you book Thunder Rosa for future dates in AEW?