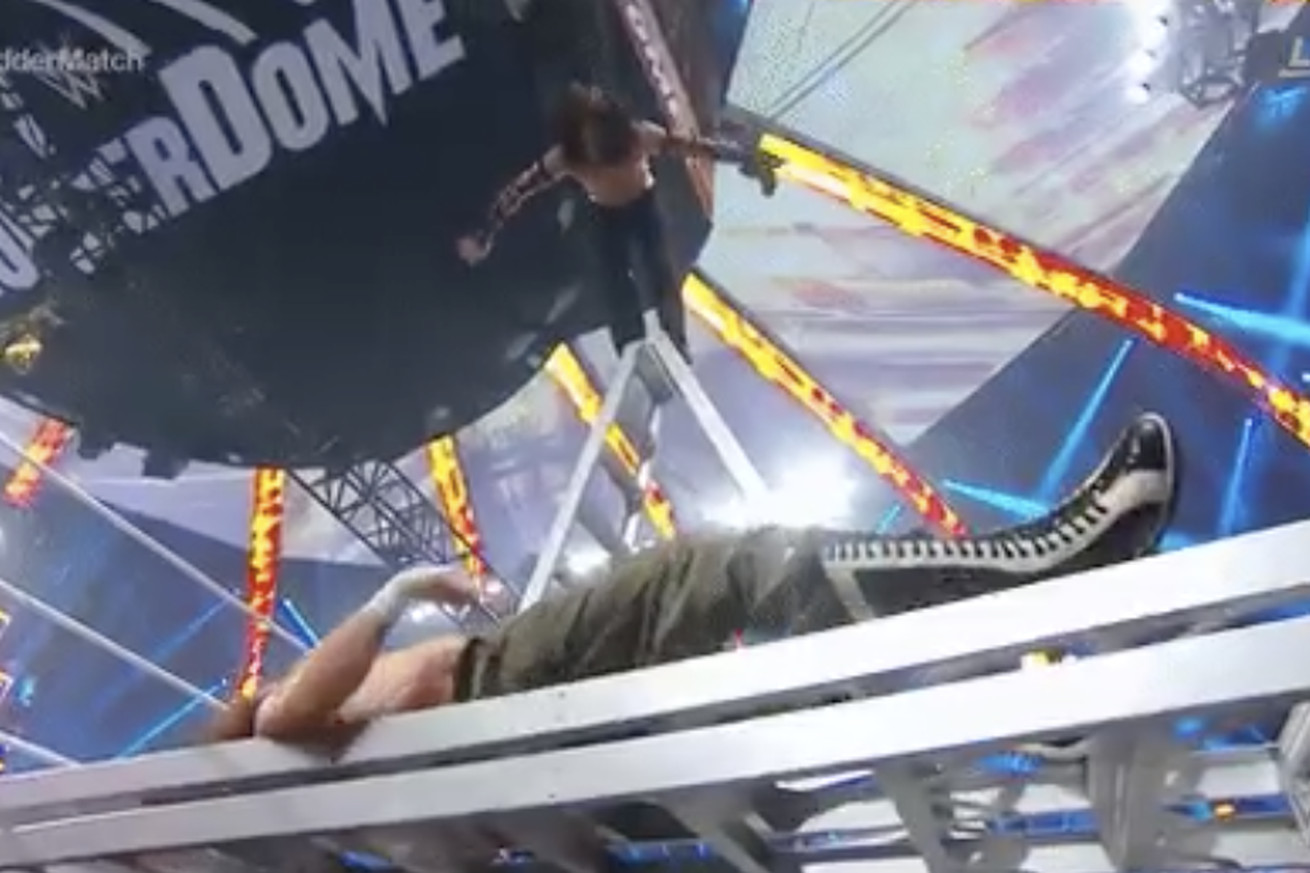 The PPV portion of Clash of Champions (no, I’m not typing out the “Gold Rush” subtitle) on Sun., Sept. 27 started with a bang… Sami Zayn, AJ Styles, and Jeff Hardy in a Ladder Match to determine the one true Intercontinental title.

Both the belt Zayn never lost before going on hiatus in the early days of the pandemic and the one Hardy defeated Styles for hung above the ring in the ThunderDome. Announcers Michael Cole and Corey Graves – perhaps killing time on a show which lost two matches late in the day – talked up each man’s experience in ladder matches during their entrances. It didn’t take long for the prowess to be on display.

Even as Cole & Graves were talking up Hardy’s knee injury, AJ sent the Charismatic Enigma across the supports of an inverted ladder…

… after he backdropped Zayn onto the ladder, Styles the first to climb for the titles. He fought off both his rivals there before Jeff was finally able to drag him down to the mat.

Painful looking spots weren’t kept in the ring, nor did they require ladders. A series ended with Sami Helluva Kicking Hardy over the barricade, but when he attempted to climb in the ring, AJ threw another smaller ladder at him.

Most of the remaining “HOLY $#!+” moments involved ladders. When Styles was close to winning, Jeff tipped over one with both of them on it. He also knocked over one into a leaping Phenomenal One mid-Phenomenal Forearm, but was sent falling all the way to the floor when Zayn pushed the ladder he was on over the ringpost.

The craziest spot happened outside the ring and involved ladders. It was a callback to Hardy’s famous WrestleMania 2000 swanton onto Bubba Ray Dudley… and it still looks painful as hell.

Somehow, there was more to come after that. And it was even nuttier. Sami brought out two pairs of handcuffs. He used one to attach Jeff BY HIS EAR GAUGE to a ladder on the floor.