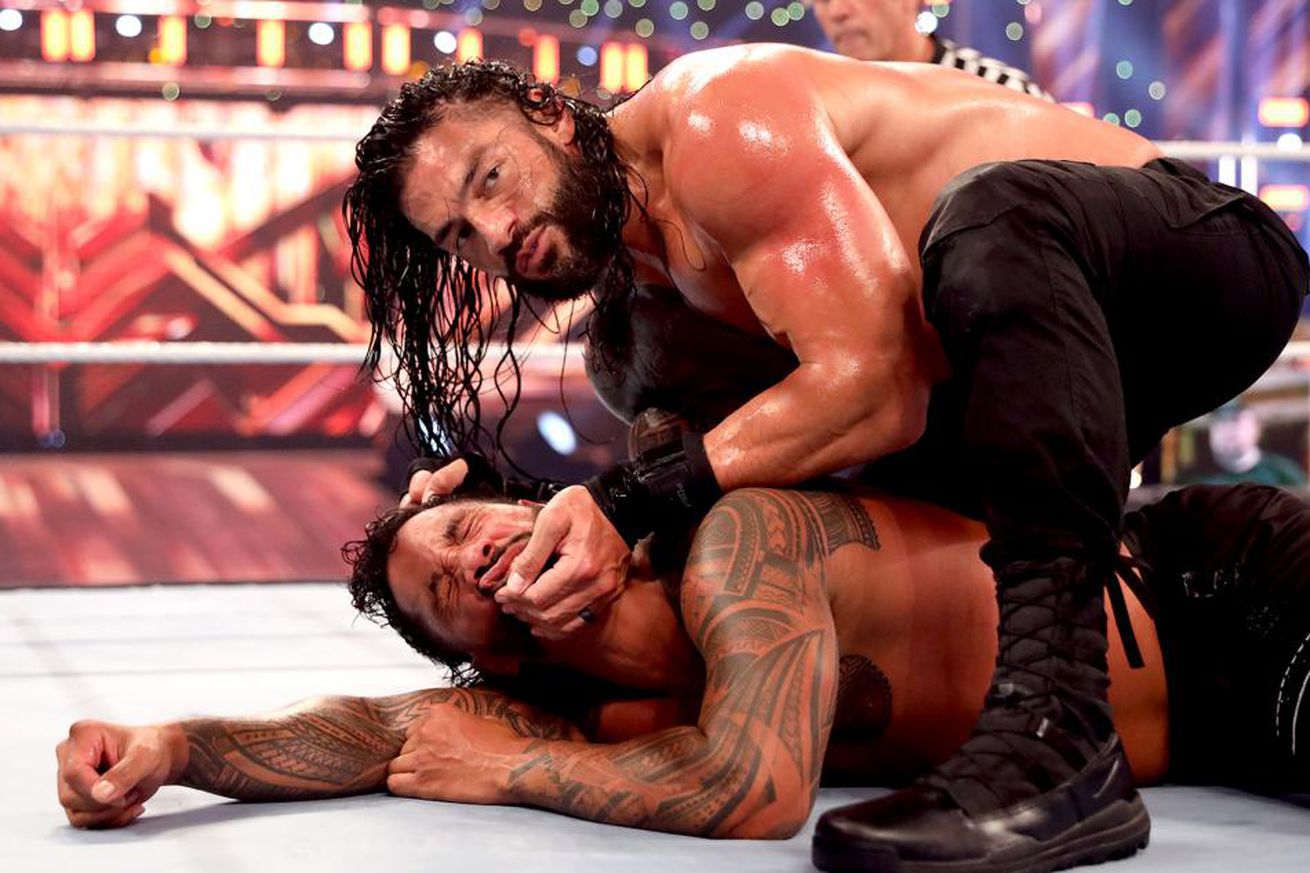 We may have just witnessed the greatest storytelling since Kofi Kingston’s rise and coronation at WrestleMania 35. If WWE could get it so right like this more frequently, that would be wonderful!

Roman Reigns is a bully.

Jey Uso is every young man stepping up and finally taking on that mean jerk in the schoolyard, and fighting valiantly to prove that no matter what, he’s leaving with his head held high because he didn’t back down.

Every single person played their role perfectly. Everyone.

Paul Heyman did not introduce Reigns, like he would normally do with Lesnar. Fantastic. Reigns started trash talking Uso early on, tossing him around and repeating that Jey is and never will be on his level. Jey was able to get some offense in, with some hard slaps and elbows.

Then Reigns dominated for a bit and it seemed like it was over, but Jey kept fighting. Reigns grew increasingly frustrated that Jey wouldn’t just take his payday and lay down. But then, the momentum suddenly shifted, and Jey was dominating. He threw everything he had at him, and the splash connected! Right at the 2.9, Reigns kicked out, but the way he did completely changed the game in his favor.

He low-blowed Jey without Charles Robinson seeing it. The smirk on his face afterward, that smug bastard. And he made sure to put the hurt on his cousin. Robinson was nearly pleading with Reigns to stop, and Reigns whipped back at him and said its his WWE and he does what he wants, so he better leave him alone or he’ll find himself without a job. Robinson was perfect. The way he looked at Reigns like he didn’t know who he was anymore. Chills.

And if that wasn’t enough, Jimmy Uso limped down with the towel and he was going to throw it, but Jey pleaded with him not to. Roman kept beating down on Jey, wanting him to acknowledge him as the tribal chief of the family, but Jey never said it. The beating kept coming and Jimmy finally threw in the towel and dove into the ring to protect his brother.

Reigns told Heyman to get the red lei that Jey wore to the ring to place over his neck as he was announced as the winner.

I am still stunned and still have goosebumps thinking about how unbelievably perfect all of this was. It was captivating storytelling. Roman bullied Jey, Jey valiantly fought without quitting, Jimmy gave Roman what he wanted, called him the tribal chief, and had such passion for his brother and anger towards his cousin, Robinson sold Roman’s vitriol so well, and Heyman’s shocked face as Roman’s arm was raised put the cherry on top. Roman Reigns is the top heel of wrestling.

It’s not just his yard – it’s his world.

No, it’s his universe.

Bayley had it coming

Bayley came out and said that Nikki Cross was unable to wrestle.

She felt bad because she wanted to continue proving that Nikki can’t cut it against her, and she announced an open challenge for the title.

After 5 seconds she closed the door and demanded the ref raise her hand in victory. Then Asuka came out! And she came out as if she hadn’t had a match literally 25 minutes prior, which was a bit strange.

So they had a pretty good match but it was so rushed and random that I didn’t even get a chance to consume it. It was over relatively quickly anyway, as Bayley grabbed a chair and the referee disqualified her.

AND THEN SASHA BANKS SLAMMED A CHAIR INTO HER BACK!

They brawled around and Bayley grabbed a kendo stick and another chair, but Sasha was able to get the better of her and it scared Bayley off. That moment was perfect.

Now would I have had her come back so soon? No. However, I like that what they’re doing by bringing her back so soon, is selling that she’s a tough woman. She sold the neck injury fantastically while beating down Bayley. Bayley also did a great job selling that Sasha is her biggest threat to losing the gold.

For selling Sasha as her biggest threat, I dig it.

Ghosts of Orton’s past

McIntyre started this match off really well, a real sense of urgency to hurt Orton. Orton was able to get control and hit the draping DDT quickly. He was about to punt kick McIntyre, but Big Show grabbed his foot and chokeslammed him into the announce table.

McIntyre was then able to take back control and got Orton to the ambulance, but then decided to play with some toys from the side of the ambulance instead of trying to get Orton into the back. It cost him, as Orton ended up not in the back of the ambulance and they brawled to the back. And then Christian appeared and attacked Orton.

McIntyre was finally able to put Orton into the ambulance, but gave him a punt kick for good measure. Then, arguably the best part of all of this – Ric Flair was the ambulance driver and drove Orton out of the arena.

I did not like Big Show’s involvement at first, because it wasn’t yet known what was going to be happening. I can’t say that I really enjoyed all of Orton’s ghosts interfering, especially since not once right after any of those interferences was Drew able to win. Orton was still able to get back at Drew, and that hurt the match for me.

What’s next for both men? Perhaps a few weeks off for Orton, which is well deserved after his stellar 2020 so far. Who challenges Drew next? There is a Limitless person waiting in the wings! I would like to see a decisive finish to a Drew and Keith Lee match.

Sami Zayn def. AJ Styles and Jeff Hardy – What an opening match! I did not expect Sami Zayn to be the winner, and it set such a positive tone for the evening.

Jeff hit his standard ladder match Swanton to send Sami crashing through a ladder. Styles at one point was attacking both men which was smart to try and not have any interference when he tried to go for the titles. But Sami… Sami was the smartest man of all. He brought handcuffs to the game. He handcuffed Jeff’s earlobe to a ladder, but when he tried handcuffing Styles to the rope, Styles got smart and stopped it. What he didn’t think was that Sami would handcuff him to Sami!

While Styles was busy trying to get Jeff away from him, Sami took the key out and unlocked his side and attached Styles to the ladder too. He was free to climb up and win. I loved this so much and said on Friday that Sami would benefit the most from winning. This was the right call.

Street Profits def. Andrade and Angel Garza – This was a really good match, which had an ending that no one saw coming. It looked like the Spanish Fly that made me legitimately jump out of my chair seemed to cause some sort of an injury to Garza and the ref threw up the X. As a result, what was going to be a kick out ended up being the winning pin for Dawkins.

Commentary made it a point to make it look like the referee messed up. Now, if Garza is legitimately hurt, that sucks for him because there’s no doubt in my mind he was going to be tag champ. That means that if Garza isn’t injured, we’re getting yet another match between these teams. Before the match, Tom made it a point to acknowledge that these two teams have been facing each other on and off since WrestleMania.

That’s not a good thing! Many feuds on this show have been going on for months. It makes Raw not that much of an exciting show. Again, with an injury it’s different, but hopefully the next match between them ends up being the last.

Bobby Lashley def. Apollo Crews – It felt Crews got more offense in against Lashley than he has in previous matches. Lashley hit a really great superplex off the top rope but Crews was able to kick out and do a nice standing Shooting Star Press and Frog Splash. Crews was not able to get out of the Full Nelson though.

So… can this feud be done now? Apollo needs to move on. Apollo/Ricochet/Cedric and Hurt Business with Cedric as well has been one of Raw’s never ending circles since before SummerSlam.

Asuka def. Zelina Vega – Vega was smart to tackle the left arm of Asuka as that is part of her deadly arsenal – the Asuka-Lock. Asuka is so great at selling an injury. Vega did well but didn’t injure the arm enough, as Asuka was still able to use her submission. It was a pretty good match, and Zelina being able to show off her wrestling skills always makes for a fun time for me.

What happened after however, means that we’re getting more of this. The standard attack after the match to keep the program going. Expecting a rematch tomorrow night on Raw.

24/7 title shenanigans – Little Jimmy led R-Truth to the referee’s room and Drew Gulak took advantage and pinned him to win. Later, Drew was being interviewed and Truth won it back. I was hoping for Drew to bring the 24/7 title over to SmackDown and have some new stuff go on with that title, but Truth seems to be nothing without it. Truth will never not be in the 24/7 title picture, until he retires. Maybe even further than that.

Clash of Champions was a really fun show. The last minute changes were unfortunate but necessary in COVID-19 times. There would have been one title change on this show if it were not for Garza’s potential injury. I was so hyped at the conclusion of this show that I Dm’ed Alex Briggs to watch just the main event, but he said no. Frowny face.

When wrestling is great, it’s great. I am so incredibly happy with how Roman vs. Jey went that I’m going to watch that again right now. I don’t do that very often. A match we all knew the finish to still ended up being one of the best matches I can remember. Going to enjoy this high before RETRIBUTION (absent from this show for some reason) does dumb stuff tomorrow night on Raw.

Hell in a Cell predictions