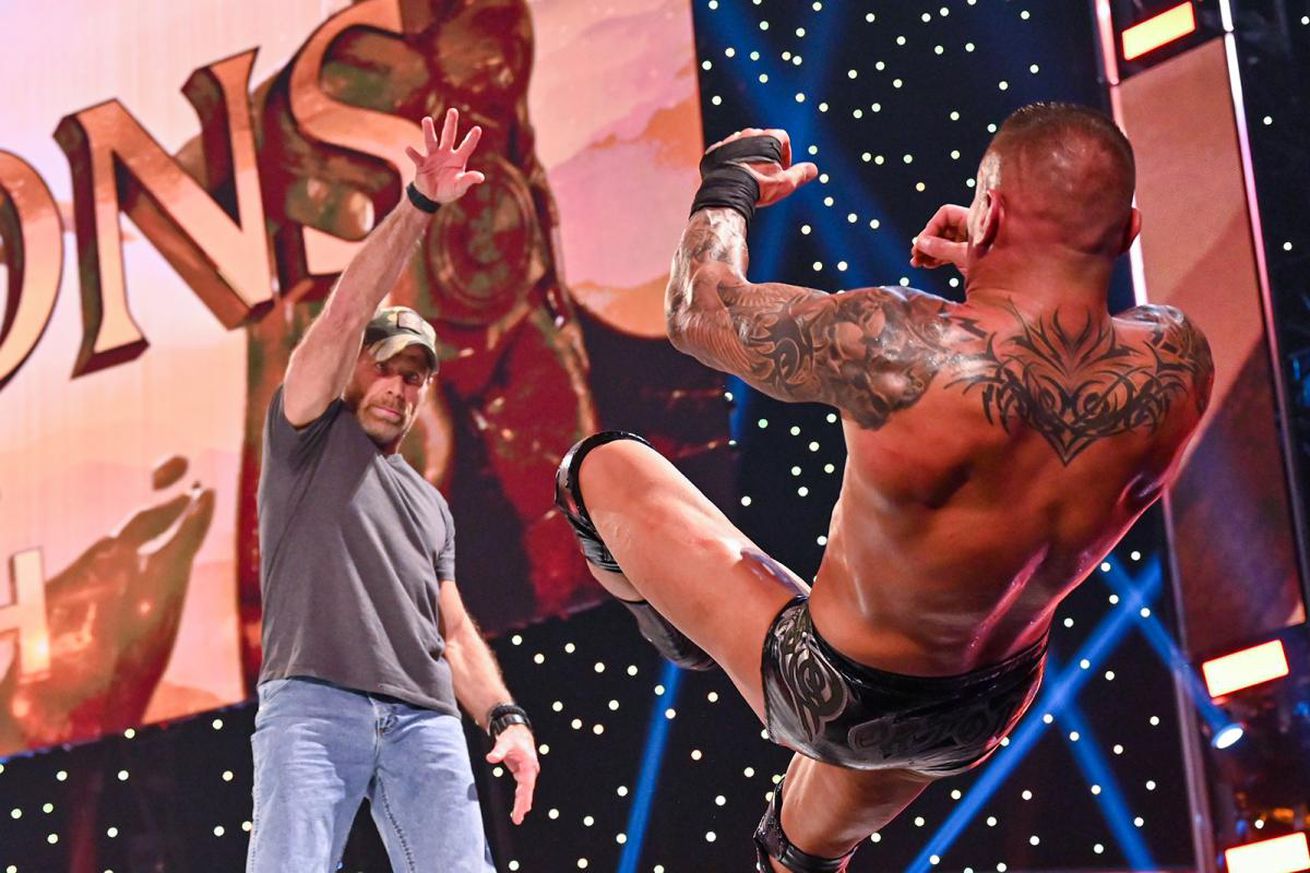 A couple important things happened for the red brand at Clash of Champions last night (Sept. 27).

1) In the course of Drew McIntyre beating Randy Orton in an ambulance match to retain his WWE championship, the Legend Killer got his comeuppance from all but one of the Legends he “killed” during his post-WrestleMania 36 reign of terror.

We’ve been looking forward to the Draft for a while around these parts, and it really can’t come soon enough. At least a couple matches we saw on Sunday’s PPV will probably be run back once or twice before the rosters are refreshed in a couple weeks.

Not sure we were expecting Orton’s name to be atop our list of who we think will be shipped off to SmackDown, though. But after Big Show, Christian, Shawn Michaels & McIntyre paid him back for the punts he’s given them over the past several months AND he came up short in his second attempt to win Drew’s belt, it’s probably the way to go.

The Viper’s 2020 has rejuvenated his career in a lot of ways. WWE used the momentum from his Edge feud to solidify McIntyre as a main eventer and give Keith Lee a solid foundation to build his main roster future on.

His feud with the Rated R Superstar is the major piece of unfinished business for Randy. But even if the 46 year old’s comeback from triceps surgery is going perfectly, he still probably won’t be back for another couple weeks. If his rehabilitation is proceeding at a non-John Cena-like pace, it could be months before Edge is back.

Will WWE keep him on the red brand until Edge returns? Or move him over to SmackDown while bringing a veteran of similar stature like AJ Styles to Monday nights?

Edge’s quest for vengeance probably supersedes the brand split. A Hall of Famer can probably get one of those brand-to-brand invitations, don’t you think?

We’ll see if we get any signs about their plans for ole Randall Keith tonight. But our vote would be for them to book another match with Lee for next Monday, and have the Limitless One send Orton on his way to Fridays as payback for the punt he took last Monday.

She put up a fight, but Zelina Vega wasn’t ready for Raw Women’s champion Asuka. She still thinks she is, though. Vega violently rejected the Empress’ post-match show of respect and looks to be demanding another shot. Asuka was softened up a bit by Bayley’s favorite chair, so maybe Zelina will fare better next time.

We’ll have to wait for word on Angel Garza’s health, but it wouldn’t be surprising if the freaky finish his injury caused leads to another Raw Tag Team title shot at Street Profits for Garza & Andrade. How else are we going to find out if the heels were finally going to claim the belts, break up, or both?

That wasn’t the only story put on hold Sunday. Nia Jax & Shayna Baszler weren’t cleared to defend their WWE Women’s Tag Team championship at Clash of Champions, so the celebration of Liv Morgan & Ruby Riott’s first WWE titles (or the latest round of complaining about their booking) will have to wait until they are.

With a clean win over Apollo Crews, United States titleholder Bobby Lashley and the rest of The Hurt Business should be able to move on to one of their other storylines, like owning Raw Underground or battling RETRIBUTION.

Twelve or so hours and counting on R-Truth’s 40th run as 24/7 champion. God is good.

– Seth Rollins latest ploy in his never-ending quest to destroy Rey Mysterio involves paternity papers and Rey’s daughter Aalyah. Is Murphy willingly taking beatings to look more sympathetic so Aalyah will turn to him her hour of need? Just how evil are these sick bastards?

– Speaking of sick bastards, T-Bar, Mace, Slapjack* & their goon squad did beat down The Hurt Business last week. But the guys & gals who want to destroy WWE from within still failed to stand tall when McIntyre lead the locker room’s response to their show-closing assault. Can RETRIBUTION get a win? Maybe they should let Reckoning & Retaliation try this week?

– Aleister Black will not let Kevin Owens move on to a Raw Underground match with Dabba-Kato. Maybe Dabba-Kato will try to get his win back from Braun Strowman while Black & KO settle their issues?

– Between the upcoming Draft and the COVID-19 issues, this feels like the kind of show we’ll hear reports of chaos and tales of last-minute rewrites about. Buckle up!