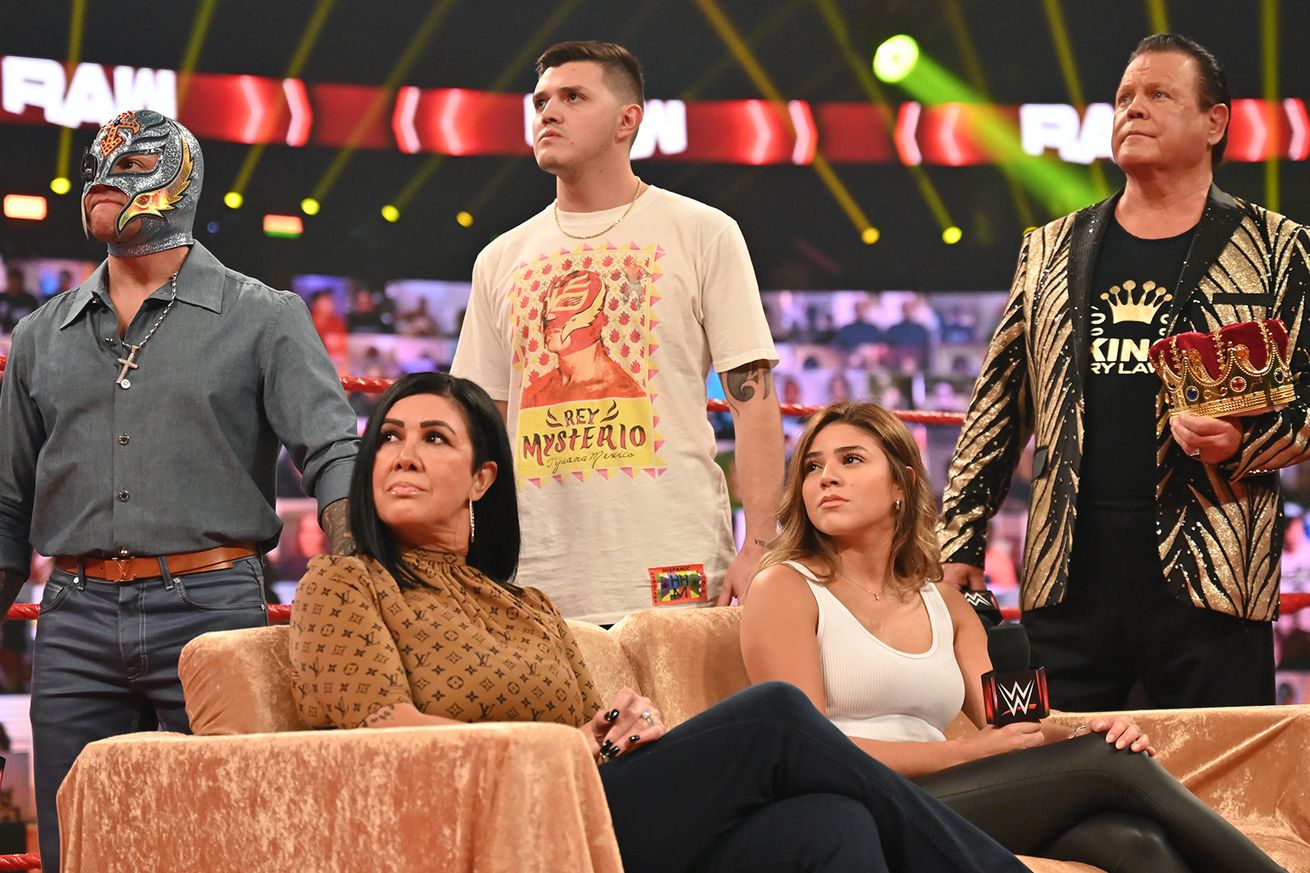 Here at Cageside Seats, we’ve been trying to figure out what WWE is doing with their tale of Seth Rollins’ latest scheme to destroy Rey Mysterio.

Best we’ve come up with – when Rey’s daughter Aalyah checked on Seth’s disciple Murphy after Rollins kicked Murph’s ass following a victory over Dominik Mysterio, the Monday Night Messiah decided to exploit Aalyah’s compassion as a psychological weapon against the Mysterios.

First he claimed, without proof, that Rey wasn’t really his daughter’s father. When that triggered an argument between Aalyah and her dad, Murphy reached out to Aalyah when she was hurting – just as she had to him. That led to some texts, which Rollins showed to the world on Raw last night (Sept. 28) in an effort to drive the wedge in deeper.

It seems to have worked, causing Dom to turn into an aggressively over protective big brother, and pushing Aalyah closer to Murphy.

It’s not 100% clear if this intended to be a romantic relationship developing between the 32 year old Murphy and 19 year old Aalyah.

WWE seems fine with the implication though, and makes sure to have everyone mention Aalyah’s age a lot to make sure you know she’s legal.

Everyone will have to decide for themselves how comfortable they are with the storyline. Personally, I’m more turned off by WWE using a man who was once indicted for raping a teenager (Jerry Lawler – the 1993 charges were dropped, with Lawler accepting a misdemeanor conviction for harassing a witness), and images of texts/direct messages that are commonplace in the #SpeakingOut movement (including multiple allegations against someone they’ll continue to push in a match this weekend at NXT TakeOver 31) to advance the angle than anything else.

Maybe The King and Velveteen Dream did nothing wrong, and the Aalyah/Murphy relationship is strictly platonic, but WWE’s need to flaunt these things is always weird to me.

One person who apparently is comfortable with the story Raw’s telling is Murphy’s ex, Alexa Bliss. She tweeted support for last night’s kayfabe developments, and was quickly called out for it.

Bliss deleted her originals, but a particularly zealous account saved the receipts. That person has since made their Twitter private, probably because they were getting harassed for criticizing Alexa… isn’t social media wonderful?

The SmackDown star’s comments on the online dust-up are still up:

Do I Know her or her age? No. Was I trying to be supportive of Murphy? Yes. Back off and calm down ppl. Just happy Murphy is getting the success he’s worked for. That’s all ‍♀️ be bothered by something else ✌ https://t.co/AuBYaltYqa

Absolutely. I agree that I should be held responsible for the storylines my ex-boyfriend receives at work.

Anything else I can take care of as well? https://t.co/a6j35ssKcD

What’s going on with Aalyah & Murphy in kayfabe? Stay tuned. Or don’t, as your conscience dictates.

What’s the moral of this story? Not sure… but probably “never tweet.”

Sermon on the Mat: Farewell to the Bulldozer