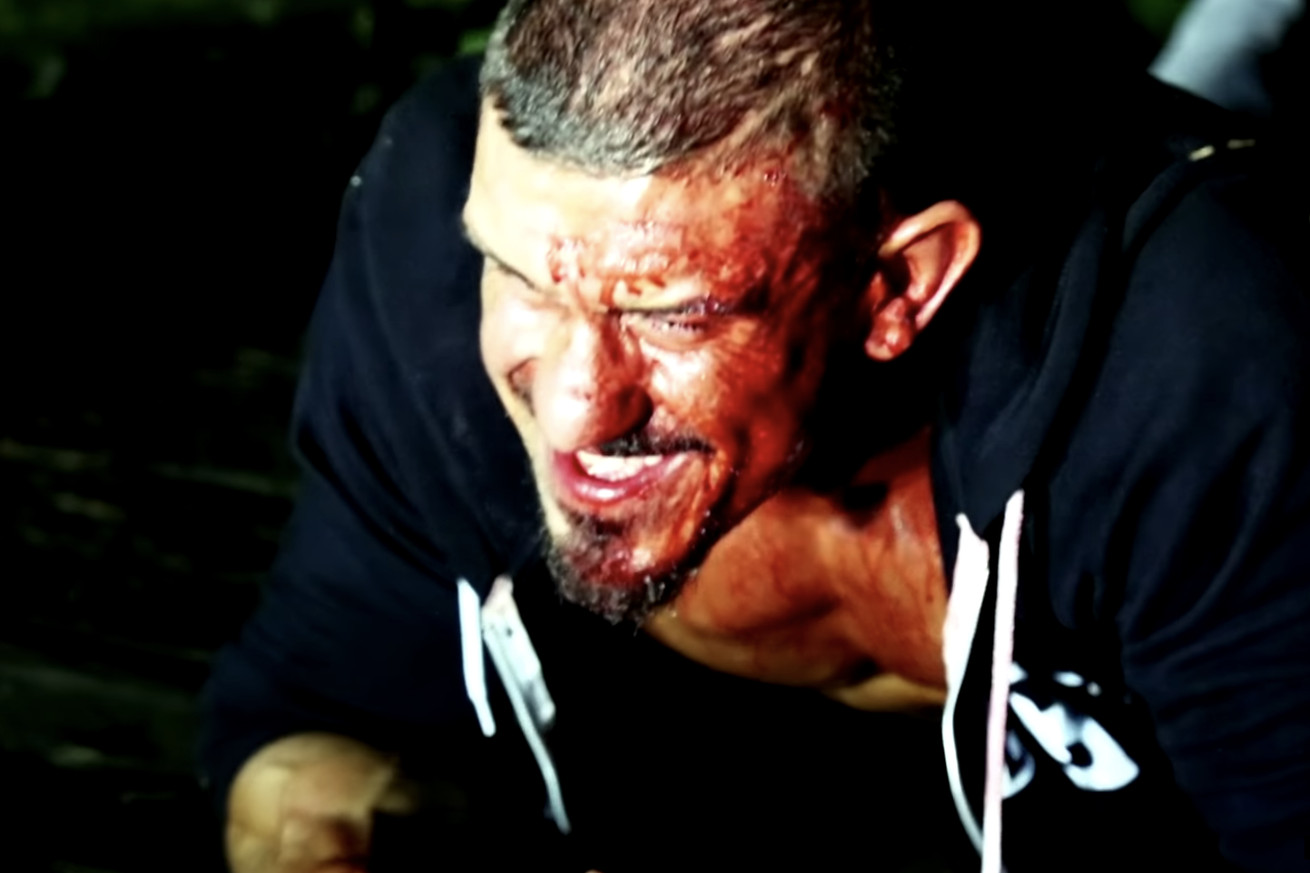 Impact Wrestling (Oct. 13, 2020) featured Heath getting one final shot at a contract, Moose beating EC3 to a bloody pulp, and an important health update for Rich Swann as he prepares to wrestle Eric Young for the Impact World Championship at Bound for Glory on October 24.

Let’s jump right into the bloody skirmish. Moose finally found EC3 and beat the stuffing out of him, but EC3 had the last laugh on this evening.

The show opened with Moose yelling at Scott D’Amore for doing nothing in regard to his stolen TNA Heavyweight Championship. Now, Moose is in a match against EC3 at an undisclosed location for the Bound for Glory. D’Amore summed it up as a pretend location against an opponent who doesn’t work for Impact for a title Moose never won. He brushed Moose off with the more important business of waiting for a health update on Rich Swann.

[email protected] now knows where he needs to go on the hunt for @therealec3 and the TNA World Heavyweight Championship. #IMPACTonAXSTV pic.twitter.com/HSSV5Xqju6

Another EC3 promo played on a wall for Moose. He called the big man pathetic. The things Moose thinks he owns are owning him. Not everything is what it seems. He believes Moose is learning and controlling his narrative. When Moose is fully prepared, he will cross the bridge to find what he seeks. EC3 held up the TNA title he dumped off the bridge last week. Moose stated that he knows where he needs to go.

The closing scene of the show saw Moose locate EC3 at the same bridge from last week. They shared a long distance shouting match. EC3 hammered Moose as unoriginal. Moose’s persona is just a mix of all his favorite wrestlers. As Moose approached closer, EC3 laid down the belt and said, “Fight me.”

“I know I’m trying to destroy the past but CROSS THE LINE. Fight me.”

The two men brawled on the bridge. EC3 got the upper hand when Moose focused on grabbing the TNA belt. After EC3 disrespected Moose with verbal barbs, Moose pummeled him into a bloody mess. Moose exited with his beloved championship, while EC3 laughed.

This story is a mixed bag at the moment. The opening scene was terrible and didn’t make sense. The closing scene was a cool cinematic vignette with vigorous violence.

Apparently, D’Amore is unaware of a major match which was previously announced for Bound for Glory. Talk about being an incompetent leader. And apparently, EC3 didn’t actually throw the TNA title off the bridge into water last week? Then EC3 claimed Moose is learning to control his narrative. Actually, that’s not true at all. Moose has been the same man he’s always been while on this wild good chase. If anything, Moose was controlling his narrative before by proclaiming himself the TNA champion.

The story rebounded for the bridge fight. The cinematic element was done well. It’s about time to see Moose kick some butt. It was a cool visual seeing Moose’s fist get bloody as he pulled back for more punches.

Now that Moose has the TNA gold, does he really need to show up for the PPV fight? If D’Amore doesn’t care, then why should Moose. It will be interesting to see how the story turns to entice Moose to continue this game of cat and moose.

Taya & Rosemary defeated Kiera Hogan & Tasha Steelz and Havok & Nevaeh in a tag team three-way. This bout had good chaotic action. In the end, Taya almost busted her face on the floor during a flying crossbody onto bodies below. Steelz danced in the ring about being too smart for that. She turned around into a spear from Rosemary then a butterfly butt buster to win. Taya & Rosemary have now won 3 in a row as a tag team.

A Call Your Shot Gauntlet match was added to Bound for Glory. It will feature 20 participants comprised of both men and women. It is like a Royal Rumble except the final two have a regular match at the end. The winner will be able to call their shot at any championship of their choosing.

John E. Bravo was stressing about his wedding going over budget. Fallah Bahh lied about not having any money after stealing Hernandez’s cash last week. Crazzy Steve called out Bahh and that led to a match later in the evening. The wedding will be in two weeks on October 27.

We cordially invite you to the wedding of @WeAreRosemary and @JohnEBravo1st on October 27th on IMPACT! #IMPACTonAXSTV pic.twitter.com/ihONscHi5U

Rosemary spoke with Havok about consensual cooperation to resurrect James Mitchell to officiate the wedding. Havok wanted no part of it, but she did agree to a match next week against Rosemary. If Havok wins, Rosemary has to leave her alone. If Rosemary wins, then Havok will assist in the resurrection.

Crazzy Steve defeated Fallah Bahh. Steve tried to trick Bahh into revealing the money hidden under his shirt. At the end of the short bout, Steve ripped off Bahh’s shirt and won with a roll-up. Bahh kept the money and ran away.

Rhino informed Heath that he pulled some strings to get Heath into the Call Your Shot Gauntlet at Bound for Glory. If either of them wins, Heath will get the contract he drew up. If they lose, then no more opportunities for Heath in Impact. Heath was stoked with positivity. D’Amore entered as Heath left. He reminded Rhino that he agreed to dump his contract as well if they don’t win.

Heath, Rhino, Hernandez, Cousin Jake, & Alisha Edwards defeated Tommy Dreamer, Brian Myers, Cody Deaner, Johnny Swinger, & Tenille Dashwood. These are 10 of the 20 participants for the gauntlet match. Teams were chosen at random. The winning squad will get a chance in a five-way next week to win the 20th spot. The loser will get the 1st spot. This bout was comedic in nature. Myers was in control on Heath when Swinger tagged himself in. Swinger then walked right into Heath’s neckbreaker finisher.

Eric Young was sarcastically worried about Rich Swann’s heath update. He will be going to the ring to get to the bottom of the situation as it pertains to their title match at Bound for Glory.

Kylie Rae defeated Kimber Lee. Deonna Purrazzo was ringside. Rae was in control and gearing up for a superkick when Purrazzo hopped onto the apron. Purrazzo dropped down to dodge a kick. Rae countered Lee’s attempt to take advantage by rolling Lee up. Rae transitioned from an STF to an armbar for victory. She wouldn’t release the hold after the bell until Purrazzo booted her in the head. A skirmish broke out with Rae standing tall as the champ retreated.

The Good Brothers believe they are the best at everything in Impact, but they need the championships to prove it. At Bound for Glory, they will walk out with the tag titles.

[email protected]_BigLG and @MachineGunKA want to be the best and the only way to do that is to win the IMPACT World Tag Team Championships. #IMPACTonAXSTV pic.twitter.com/yF3vU1QSmn

Luke Gallows defeated Madman Fulton. Karl Anderson and Ace Austin were ringside. The big man fight resulted in a quick double count-out. After commercial break, it was announced that the match was restarted as no DQ. Weapons were everywhere all of a sudden. For the finish, Gallows kicked a chair into Madman’s face then dodged a corner charge so Madman went head first into a chair. Gallows ended it with a double-handed chokeslam onto two open chairs.

Eric Young took over the ring for the main event segment. He demanded answers about Rich Swann’s health. He wants to hear someone tell him that Swann is quitting their title match at Bound for Glory.

D’Amore got the call backstage from Swann’s orthopedic doctor, so he came out to address the situation. D’Amore informed the world that Young did additional and substantial damage to Swann’s ankle. Young was pleased. He attacked Swann out of kindness, since it would be much worse for Swann at the PPV. D’Amore ruined Young’s night by continuing to say that Swann is a special kind of athlete and still ahead of schedule to return.

Young grabbed D’Amore, shoved him into the corner, put the boots to him, and hooked an ankle lock. Swann ran down to make the save and hit some flashy moves.

The in-ring action was a mixed bag. Steve vs Bahh and the ten-man tag were heavy on comedy. The women’s matches were very good. Rae vs Lee would have stolen the show if not for the big man fight, which was right up my alley. Since one hoss had to lose, they did a great job of putting down Fulton with repeated head contact with chairs and a brutal finish.

The most interesting story element from this episode was Rae losing her sunshine. Just look at her facial expression as she refused to let Lee go after the win.

A FEROCIOUS @IamKylieRae doesn’t release the hold after picking up the submission victory. #IMPACTonAXSTV pic.twitter.com/8UJ59TAUFD

That is creepy, even though, Rae has every right to feel anger after the way Purrazzo snapped Susie’s arm. I’m not a fan of smiley Kylie, because she has unrealistic innocence. That’s why this darker side is so intriguing. It makes Rae easier to take seriously.

Outside of the issues I already mentioned with EC3 and Moose, the most disappointing story element from this episode was Swann returning without any ankle issues. Impact had done such a good job of putting doubt into his health and making sure he still limps for recent appearances on TV. Now I’m supposed to believe he can rock and roll one week after his ankle suffered substantial damage from being smashed by a kettlebell? Come on. Give me a break. They badly blundered that one.

Closing on a light note, my favorite comedy bit was Jake dancing to his music. I love that song, but I still can’t figure out the name. It’s at 1:40 of this clip.

[email protected] is wondering if @FALLAH1 has anything to get off his chest. Like a large stack of money for example. #IMPACTonAXSTV pic.twitter.com/tYpsqkLR48

Share your thoughts on Impact Wrestling. Who stole the show?