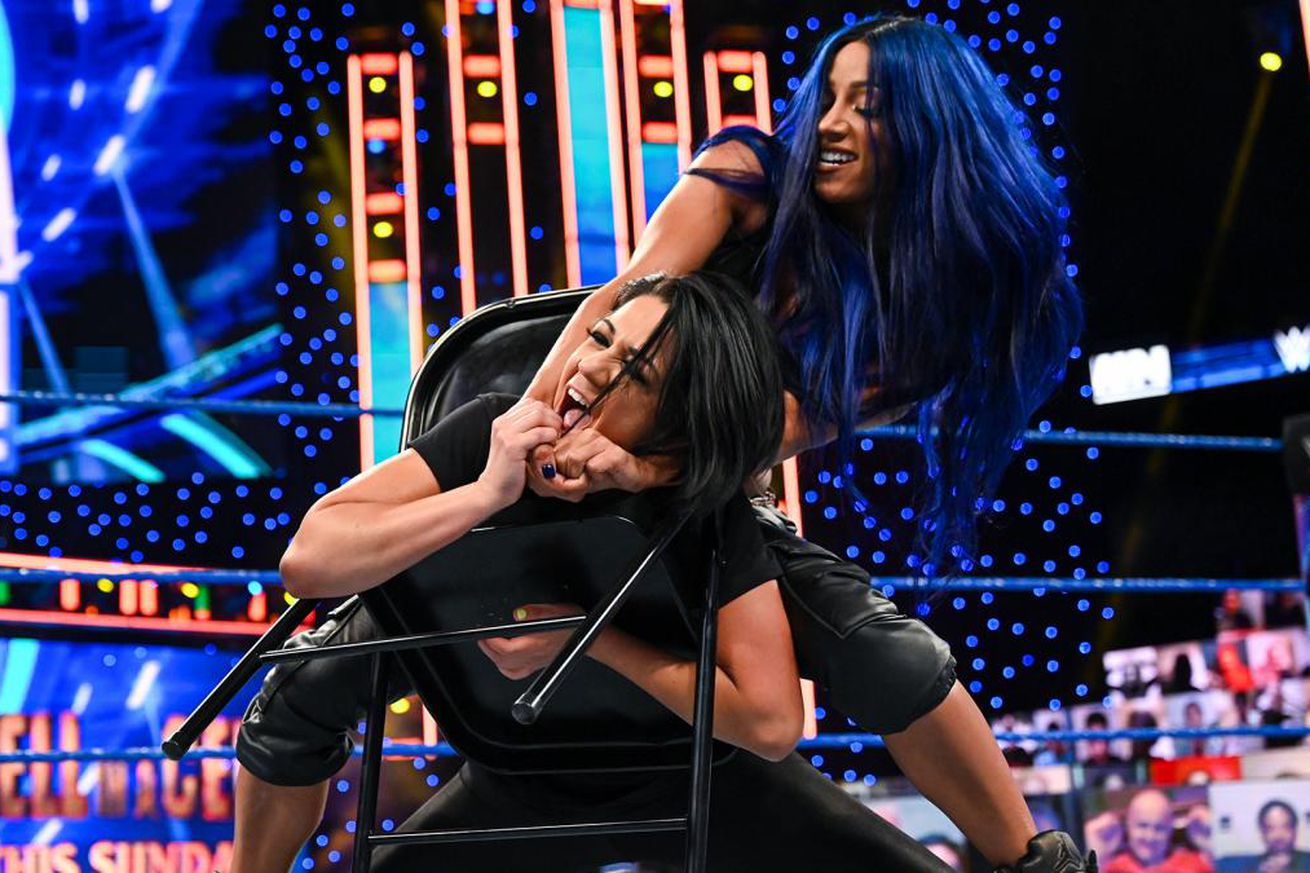 It’s one thing to predict the winners and losers at Hell in a Cell 2020, but how about taking a guess at the match order on that card?

WWE has announced five different segments for the main card of Hell in a Cell.

Here is my subjective view of how important each of these five segments rank, ordered from most important to least important.

There are only five segments announced thus far, so it’s reasonable to expect that WWE will announce a couple more matches at some point this weekend. Therefore I am going to build a card with seven total segments.

This card includes three matches that will be fought inside Hell in a Cell. It’s very likely that one of these matches will open the card, one will take place in the middle of the card, and one will main event the card.

Any of these three matches could be the opener, middle, or, main event, depending on the planned finish; it’s pretty wide open, as far as placing each match on the card.

Recent rumors suggest that Bayley and Banks will close out the night. It’s certainly possible, especially if there is a title change. However, WWE rarely ever places a one-on-one women’s match in the main event spot of their pay-per-view events. It’s only happened twice, and one of those times was on an all-women’s event. However, the other time it happened was indeed a Hell in a Cell match featuring Sasha Banks, which is exactly what we have here.

Roman Reigns vs. Jey Uso seems like a better bet to headline this card. WWE has hyped this match up as having the highest stakes in history. The winner is obvious, but that didn’t stop these two stars from headlining Clash of Champions last month.

The storyline between Drew McIntyre vs. Randy Orton seems to be petering out to me, and the timing no longer feels right for this to be the main event. But once again, all it takes is a booked title change to justify this match as the show-closer.

Drew McIntyre has never main evented a pay-per-view as the defending WWE champion, and I expect that streak will continue. I’m going with Reigns vs. Uso for the main event.

The women’s match seems like the best fit for the opening bout of the night, just like last year with Banks and Becky Lynch. That leaves McIntyre and Orton for the middle segment.

I need to add two matches to this card.

If WWE is looking for a match to fill 15 minutes, they can go with a tag match like Kevin Owens & Daniel Bryan vs. Cesaro & Shinsuke Nakamura. Or maybe WWE isn’t looking for any long matches, and they’ll just add some squashes. Perhaps the most likely scenario of all is booking rematches of stuff we already saw on Raw or SmackDown this week.

I’ll add the Cesaro tag match from above, as well as a squash. How about Bobby Lashley vs. Slapjack? Yeah ok, I admit that Titus O’Neil is a more likely squash opponent for Lashley right now, but I’m really trying to will into existence a pay-per-view match for ol’ Slapjack. If WWE cares so little about the card that they won’t bother to tell me what’s on it, then that gives me the creative freedom to add Slapjack to the card with zero regrets.

I’ll stick Otis’ match against Miz in the first half of the card, so it leaves open the possibility that either wrestler can cash in the Money in the Bank contract later in the night. I won’t directly follow a cell match with it though, so that means Otis goes in Segment 3.

The cell matches should not be immediately followed with long matches. That means Slapjack and Elias get the call for those spots. I’ll put Elias in Segment 2, and Slapjack in Segment 5.

That leaves a Cesaro tag match for Segment 6.

So here is my final prediction for the match order at Hell in a Cell, along with guesses on the bell-to-bell match times:

That’s my prediction for the match order at Hell in a Cell 2020. What’s yours?