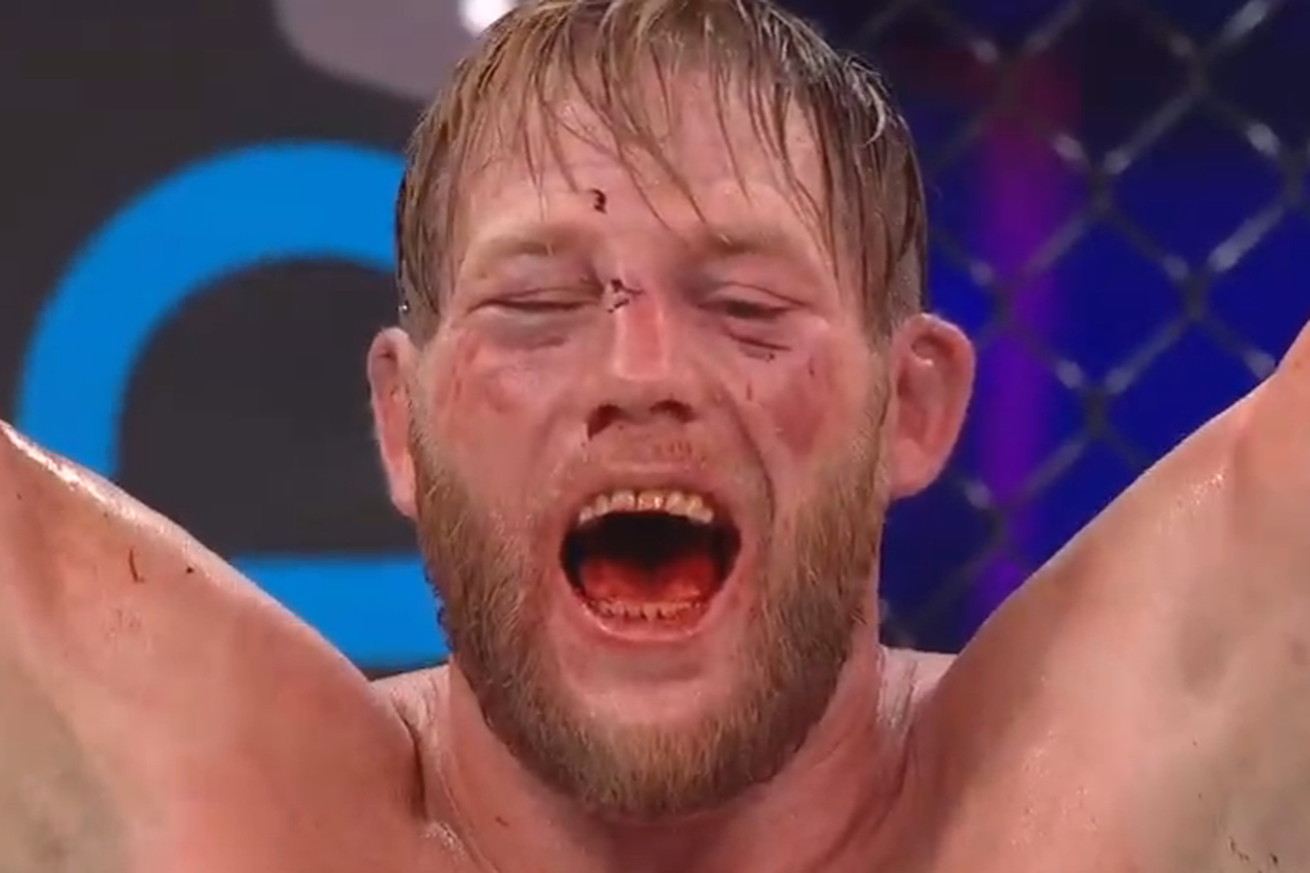 Jake Hager returned to the MMA cage looking to pick up his third victory as a professional fighter. It was a workman effort that went the distance against Brandon Calton during the prelims of Bellator 250 at Mohegan Sun Casino in Uncasville, CT. The fight even had a little pro wrestling chicanery with a low blow.

Time for the tale of the tape.

Hager came in with a record of 2-0 with 1 no contest due to a low blow. Both his wins were by submission. Calton was 2-0 as a professional. His record including amateur fights was 7-0 with 7 knockouts. This was Calton’s third fight in 132 days. Interesting side note, he spent two years with the Pittsburgh Steelers.

Hager entered to what I believe was an R-Truth rap tune. “Former WWE World Heavyweight Champion,” was listed on his MMA resume.

Round 1 began with Hager circling as he looked to land punches. Calton was content to feel him out and look for counters. They exchanged eye pokes on punches, but no break was needed. A few punches landed from both men before Hager shot in for a takedown attempt. Calton stayed on his feet as Hager pushed him into a clinch against the cage. Hager worked for position while throwing knee strikes. The referee broke it up due to lack of action. Hager came out bleeding from his nose. In the center of the cage, Calton connected with a stiff left hook. Hager felt that one, but he kept his wits. Hager returned fire for solid contact in the final ten seconds. Calton took the punch in stride.

Round 2 was the first second stanza of Hager’s MMA career. Calton came out with confidence and landed punches early. Hager closed the distance and clinched against the fence. After a separation, Hager used his reach advantage to tenderize Calton from a distance. Calton rocked Hager with punches at 30 seconds to go. Hager clinched against the fence to ride out the round.

The Bone Crusher was coming in strong to close out round 2️⃣.

The 3️⃣rd and final round of our #Bellator250 Monster Energy Prelims is LIVE NOW on YouTube!
▶️ https://t.co/z4dwej4LBD pic.twitter.com/hswAFjDYfg

Round 3 saw Calton come out with attitude trying to finish. He smashed a few shots, but his flurry did not last long. Back to Hager circling with jabs and Calton picking his shots. Hager bopped Calton and went back into the clinch on the fence. Both men started to gas. Hager focused on landing knees. He switched to punches and blasted Calton in the bread basket then the nuggets. Calton eschewed his recovery time from the low blow by saying, “Let’s go. F—k it.” About 90 seconds remained. Both aimed for big punches. Hager was more active in the final seconds as time expired.

I agree with that judgement. I had Hager winning the first round due to control, Calton winning the second due to damage, and Hager taking the third due to more effective activity. Hager improved to 3-0. Unfortunately, there was no post-fight interview.

It was a solid effort from Hager. This was the kind of fight that showed he’s still working on his skills. I’d be a little concerned that Hager couldn’t score a takedown, since that is his bread and butter. In an interview with MMA Junkie earlier in the week, Hager stated that his plans were to take a step up in competition in 6 months to a year. I think he’s going to need more fights in the cage to build experience before taking on an experienced challenger.

Hager vs Calton is available for free on Bellator’s YouTube channel. The introduction festivities kick off at 1:20:42 of the prelims. The bout begins at 1:27:50.

What’s your take on Hager’s fight? Do you see enough promise that he could rise to title contention in time?