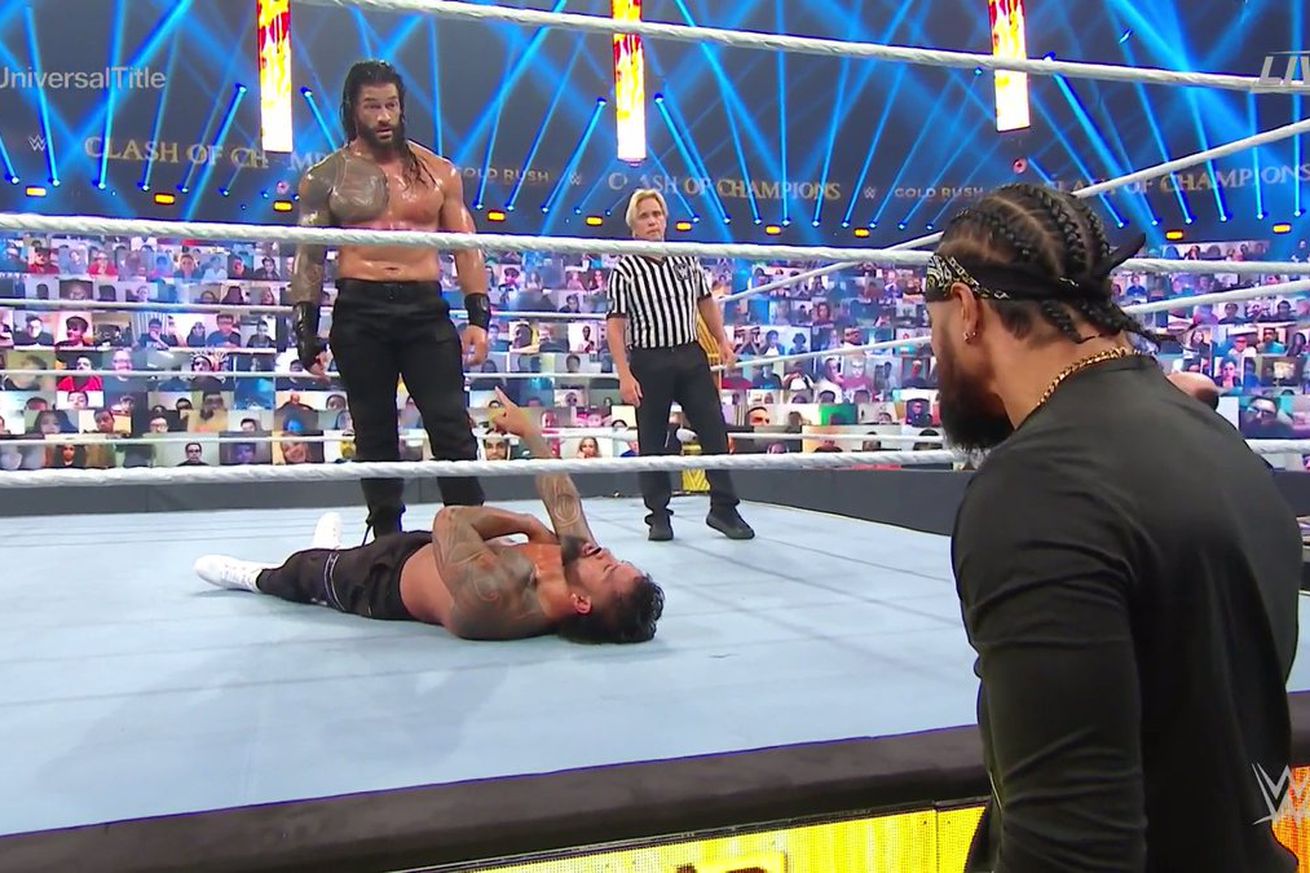 The bloodline battle for the Universal title headlined Sun., Sept. 27’s Clash of Champions PPV. Just as they’ve been doing on SmackDown, to get us ready for the main event WWE reminded us of the lifelong story behind Jey Uso and Roman Reigns – including The Tribal Chief’s message to his cousin from last Friday night. Roman doesn’t intend to let Jey take his seat at the head of the table.

WWE’s video packages are always good, but this one still stands out as one of their best.

It led right into a tense opening, as Reigns attempted to psych the challenger out.

But Jey was ready with a few mind games of his own.

The champ quickly took control of the match, and sought to end things early. Reigns looked increasingly frustrated when his cousin wouldn’t stay down for a three count. Jey had a comeback in him, naturally, but it was short-lived. A BIG Superman Punch sent Uso to the outside, struggling to get to his feet.

Blows were exchanged there, but Roman stood tall and talked his cuz while pummeling him. Jey fought back, and the high-flying moves he usually does with his twin Jimmy fueled the comeback. A pair of dives and a crossbody off the top set-up a superkick for a great nearfall.

Reigns came back, and even unveiled a new jumping leg drop move in the process. But Uso has an even more impressive looking flurry in him. Roman worked a low blow in to his next kickout, though. In between the speare that followed, the Tribal Chief demanded Jey call him that before he ended the match. Even having his advisor Paul Heyman acknowledge him wouldn’t placate the champ; referee Charles Robinson was admonished by Reigns when he tried to stop the beating.

It eventually brought Jimmy out. The injured Uso wanted to say his brother by throwing in the towel, but Jey told him not to and Roman said he’d just make Jimmy come in and acknowledge him if he did.

After raining down blows on his cousin, Jimmy did both. Reigns didn’t stop when the towel came in, but he did after brother shielded brother and gave the champ his props as the Tribal Chief.

This was a hell of a scene. Turning Roman Reigns heel continues to pay dividends for WWE.

Just when you thought RETRIBUTION couldn’t get any worse…